The Power of Skepticism | Occidental College

The Power of Skepticism 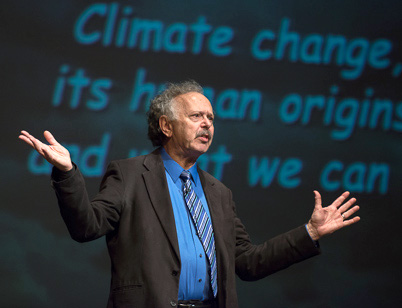 Global warming is real, caused by humans, and we need to do something about it, Richard A. Muller, UC Berkeley physics professor, said Monday as Occidental’s 2013 Antoinette and Vincent M. Dungan Lecturer in Energy and the Environment.

Introduced by Oxy physics professor Daniel Snowden-Ifft as "one of the most creative and prolific researchers of our time," Muller traced his path from a scientist skeptical of global warming to one convinced by his analysis of the data that the phenomenon exists – although not always in the ways the public might think.

"Global warming is real, yet much of what you hear about climate change isn’t," Muller told his large Thorne Hall audience, including claims that it is responsible for a recent plague of powerful storms and rapidly rising sea levels, and that it is a serious threat to the survival of polar bears.

Because of his stature in the scientific community – Muller won a MacArthur "genius" award in 1982 for his work in astrophysics – his previous criticisms of global warming studies carried considerable weight.

He was given research funds by Charles Koch of the Koch Brothers, the billionaire businessman known for funding climate skeptic groups such as the Heartland Institute, to study the issue. Rather than debunking the theory, Muller’s analysis convinced him that global warming is a real phenomenon.

"I’ve been getting awards for changing my mind. To me, it’s all slightly ridiculous," he said. "We should all always be skeptical. The key is being objective."

Citing issues ranging from poor weather station quality to the unacknowledged influence of heat islands created by urban areas, Muller and his team conducted a new analysis of existing data, including temperature readings dating back to 1753.

The results convinced him the phenomenon is real, which led to his next question: What can be done about it? The key is to focus on China, India, and other developing countries where alternative technologies such as solar and wind are not cheap enough to compete effectively with coal, he said.

China exceeded U.S. carbon dioxide emissions in 2005 and continues to grow, while emission rates in the United States are on the decline, he said. "If you want to stop global warming, and don’t mention China and India, you are not addressing the issue."

Natural gas produces from one-third to one-half of the carbon dioxide of coal, and new technology has made it possible to tap new sources of gas. "The switch from coal to natural gas is the most important thing to do, in addition to conservation," said Muller, who plans to travel to China next month to talk with government officials and industrialists about the issue.

Listen to the entire talk below