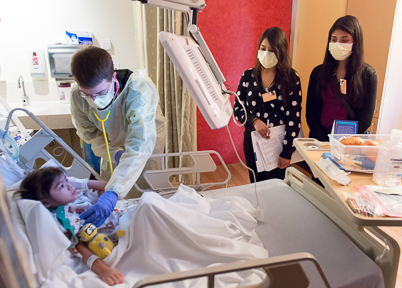 For the second year in a row, 10 Oxy pre-meds spent the last two weeks of their winter break "shadowing" doctors at Children’s Hospital Los Angeles to get a better sense of what the practice of medicine entails.

It is one of the few such programs for undergraduates in the country. "They follow attending physicians, not residents or interns, who typically are too busy to interact with pre-meds," explained Angela Wood, director of pre-med advising at Occidental, who coordinates the CHLA program. "I want students to know that they are getting into the right field for them," she said. "It also is a way for them to document to the medical schools that they apply to that they understand the reality of the practice of medicine. Real doctors are scientists and humanitarians. You have to first and foremost want to serve people, otherwise it won’t work for you."

CHLA is a teaching hospital run by USC’s Keck School of Medicine, so the doctors, many of them faculty members at Keck, "are so willing to help educate the next generation of doctors, to show and to share," Wood added. "They’re so happy to work with these young people who want to pursue this noble profession." Wood said she typically receives 35-40 applicants for the 10 spots available in January and again in May (during the two weeks following graduation).

For Rachel Safran ’13, a kinesiology major from Murrieta, the two weeks she spent at CHLA helped narrow down her career goals. She had originally planned to pursue a Ph.D./M.D. track with an emphasis on orthopedic research. After her experience at CHLA, "I want to do more of a clinical emphasis than lab now," she said. "It’s a lot more engaging. Plus, even as a practicing physician, I’ve seen that they still all do their own research and then apply that to their clinical practices." She now plans to pursue a career as a pediatric orthopedist.

The experience had the opposite effect on Allyson Fukuyama ‘13, a history major from Maui who wrote her senior comps on the history of Hawaiian medicine. "It’s actually broadened my interests—I learned about specialties I’ve never heard of," she said.

Karina Ortiz ’15, a kinesiology major from Napa, found the experience so enriching that she is now applying to volunteer at CHLA in the rehabilitation department. "I like that we got to follow doctors in different specialties and that the doctors were helpful in answering our questions about medicine, and patient care in particular," she said. "It was extremely helpful because it allowed me to see how different doctors approach treating their patients. I definitely know now that I want to pursue a career in a health-related field, particularly in pediatrics."

For their part, the doctors are impressed with the Oxy students, Wood said. "Our students are humanitarian types. They are into outreach, equality and social justice. They are so inspired to do good in the world. They are also mature and intelligent, humble and polite kids. They don’t have a sense of entitlement. They are so appreciative and grateful. And the doctors take note of that."

Dr. Cheryl Lew, attending physician in the pulmonology department, agreed. "This is the second year in a row I’ve been involved with the Oxy kids. It’s been interesting for me," she said. "The Oxy students that I’ve encountered are well-rounded and fairly sophisticated, and it makes it more fun. Sometimes we get shadow students [from other schools] who are excessively nerdy, overly concerned with the science—and that’s not why we’re here. We’re here to interact with patients. The Oxy kids have the proper mindset."