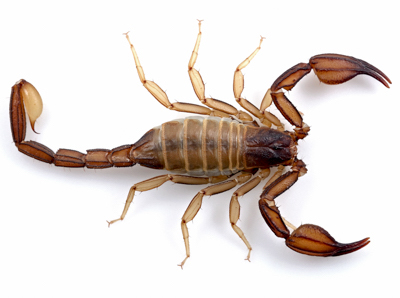 One, Kovarikia oxy, named after Occidental College, was found in Eaton Canyon in Altadena and "probably exists in other canyons in the San Gabriels," McCormack said. This newly identified species of scorpion "has both genetic and morphological features that make it distinct from its closest relatives in nearby mountain ranges."

The second newly found species is Kovarikia savaryi, found in the Santa Ana Mountains. DNA sequencing shows the two new species are unrelated to each other and to the three previously identified scorpions in the same genus found in other mountains in Southern California. Many other scorpion species are found in the deserts and mountains of the region.

"This finding is significant because it shows that we still don't know the full biodiversity in our nation's biggest metropolis," McCormack said. "If there is a new scorpion lurking around at Eaton Canyon, then who knows what other species await discovery. This should inspire citizen scientists and young, aspiring biologists to observe and record the natural world, even in their own backyard. You never know what you'll find."

Scorpions, thought to be derived from amphibious ancestors that lived more than 425 million years ago, appear to have physically changed relatively little since their adaptation to land. Recent molecular studies have found that geography accounts for the greatest diversity among different scorpion species, which are found on every continent except Antarctica.

California is home to numerous endemic scorpions. Scorpions in the genus Kovarikia are restricted to humid, rocky microhabitats in several counties of Southern California. Three currently recognized species in the genus, K. angelena, K. bogerti and K. williamsi, are relatively rare and known from fewer than seven documented localities each. Estimated divergence dates among the five major groups of Kovarikia predated the start of the Pleistocene 2.6 million years ago, or to put that in perspective, around the time our ancient hominid ancestors like Lucy were evolving in Africa.

"Our genetic data strongly support the recognition of Kovarikia from the San Gabriel Mountains and the Santa Ana Mountains as distinct species," McCormack said. "They differ in their DNA, which records a long history of isolation from other species." Like most scorpion species, one species can be difficult to tell apart from another for the layperson, he added. However, close examination by co-authors Michael Soleglad and Matthew Graham revealed unique physical traits as well, such as "consistent differences in the size of the telson (the ‘stinger’) and the number of comb-like teeth on a sensory apparatus on the belly-side of the scorpion called the pectine."

The study indicates that additional species are probably present in the genus and reveals the need for future research with denser sampling.

Scorpions in California are almost never seen by hikers and are only active on certain nights and under certain environmental conditions, according to McCormack. Scorpions are predators that feed primarily on insects.

The paper, "Genome-wide SNP data and morphology support the distinction of two new species of Kovarikia Soleglad, Fet & Graham, 2014 endemic to California (Scorpiones, Vaejovidae)," was  published in the journal ZooKeys on February 22.