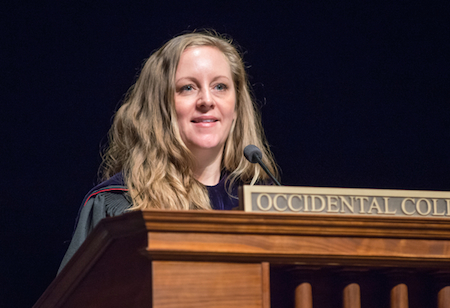 A blog post by an Occidental College sociologist about the marketing of padded, "push-up" bikini tops to young girls prompted Abercrombie & Fitch to backpedal after the post went viral, prompting media attention and criticism from parents.

The blog post by assistant sociology professor Lisa Wade about Abercrombie & Fitch's "Ashley" bikini top led the national retailer first to change the market for the item, then remove the product from its website altogether.

The padded top, part of the company's spring bathing suit line, was originally marketed on the Abercrombie Kids website to girls as young as 7 years old.

"The average age of puberty is 12," Wade wrote on the blog she co-authors, Sociological Images, on March 19. "So, at what age should girls start trying to enhance their cleavage? How old is too young?"

The post immediately "went viral" and was shared, tweeted and re-posted. News outlets, including the Chicago Tribune and Columbus Dispatch, then took up the issue.

Wade said she was surprised by the response. "We put up this type of thing on the blog routinely," she said. "There's nothing unusual about the sexualization of young girls in America. I don't know why this resonated more."

While she is heartened that the issue was raised, Wade doubts there will be any lasting impact--at least on Abercrombie.

"I think it would be nice to think that we scolded Abercrombie and that they feel bad and will be different. But I don't think that's what happened," she said. "I think that this is part of Abercrombie's schtick. They hypersexualize young people in general. All you have to do is walk by their store at the mall and look at the photos on display to see that. It's softcore porn. I think they're going along with the ‘all publicity is good publicity' mentality. Which doesn't mean to say I don't think we made a bigger impact by raising this issue back into public awareness, at least for a second."

This isn't the first time Abercrombie has been accused of marketing sex to children. In 2002 the clothier was criticized for offering children's-size thong underwear, the Chicago Tribune noted March 30.

Wade says society needs to look at "the bigger picture about what the problem is."

"I don't think we can think about why we have a society that sexualizes young girls without looking at the flip side, which is the infantilization of adult women," she said. "We're told we should look like young girls as long as possible in our lives. Most men marry women who are younger, less educated, shorter, and who make less money. What we see is this naturalization and eroticization of an asymmetrical relationship between older men and younger women.

"This isn't just about little girls. This is about a bigger problem of gender inequality, where we expect women to remain under men's care and beneath him in some way for their entire lives. That's the real problem," she concluded.

Wade has taught at Occidental since 2006. Her areas of expertise include social inequality; the social construction of the body; sexuality as power; and the media, feminism, and medicine as social institutions. She teaches courses in gender, race and ethnicity, sexuality, science and medicine, and the body. In 2010 she received the Pacific Sociological Assn.'s Early Career Award for Innovation in Teaching Sociology in recognition of her creative and novel teaching methods.

Her teaching also reaches around the globe through the popular blog she founded in 2007, Sociological Images. She co-authors the blog, which is sponsored by the American Sociological Assn.'s Contexts magazine, with Gwen Sharp, an assistant sociology professor at Nevada State College in Henderson.

Subtitled "Inspiring Sociological Imaginations Everywhere," the blog documents how race, gender and other issues are reflected in society and pop culture, and in advertisements, commercials and other media. Visitors to the blog number a half-million a month, or 18,000 per day. Sociological Images has been highlighted in influential news and culture blogs, including Boingboing.com and Feministing.com.