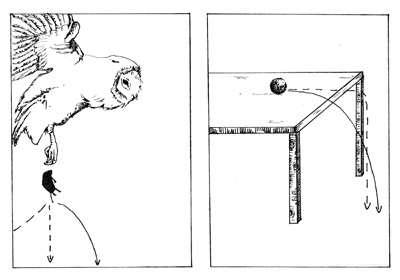 Occidental College associate professor of psychology and cognitive science Andrew Shtulman gave a campus audience a sneak preview April 18 of the intriguing concepts in his new book Scienceblind: Why Our Intuitive Theories About the World Are So Often Wrong (Basic Books, $30).

The book (which features illustrations by some of Shtulman’s students) will be available April 25 (including in the Occidental bookstore). Scientific American has already flagged Scienceblind as one of their book picks for May.

According to Shtulman’s research, people are born to create theories about the world—via perception and culture, among other factors. Unfortunately, these "intuitive theories" are usually wrong. Intuitive theories of the physical and biological world can blind us to actual scientific facts and prevent us from learning how the world actually works.

Millions of people, for example, believe that dinosaurs co-existed with humans, the sun revolves around the Earth and the continents do not move.

Why do we catch colds? What causes seasons to change? If you fire a bullet from a gun and drop one from your hand, which bullet hits the ground first? When we rely on our own powers of reasoning, we almost always get these questions wrong, Shtulman says. Even worse, we regularly misconstrue fundamental qualities of the world around us. Shtulman explains that the root of our misconceptions lies in the theories about the world we develop as children. They're not only almost always incorrect, they close our minds to ideas inconsistent with them, making us unable to learn science later in life. Instead, science is ignored, politicized and rejected.

Holding intuitive theories—which are culturally universal—leads to dire consequences both for individuals and society at large. Intuitive theories lead us to make suboptimal decisions about consumer behavior (involving GMOs, fertility treatments and performance-enhancing drugs); health behavior (such as infectious disease avoidance, vaccination and organ donation); and public policy (around such issues as climate change, evolution and stem-cell research).

In a review, Publishers Weekly called Scienceblind "timely, important and well-crafted" and said it "voices a convincing and unsettling argument about the persistence of science denial that has even broader implications for the state of public discourse."

It is essential, according to Shtulman, that we dismantle our intuitive theories and rebuild our knowledge based on scientific facts. That process starts with articulating and confronting our intuitive theories. The reward won't just be a truer picture of the world, but clearer solutions to many controversies that plague politics today.

"We must address these intuitions if we hope to pursue a more productive economy, healthful society and livable environment," Shtulman concludes.

Shtulman, who holds degrees in psychology from Princeton and Harvard, directs the Thinking Lab at Occidental. He has published several dozen scholarly articles on conceptual development and conceptual change. His work has been featured in Scientific American, the New Yorker and on CBS News.