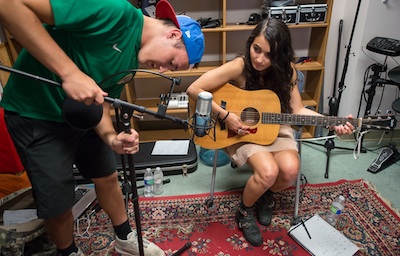 On most days, the sounds emanating from Booth Hall Room 105, the small but utilitarian (and soundproof) headquarters of RAW Records, are so imperceptible that students studying in an adjoining music library aren’t aware of them. If the producers, artists and promoters involved with the organization have their way, it won’t be long before these sounds are penetrating the entire community.

While a small liberal arts school may not seem like a natural home for a recording studio, RAW’s head of promotion and artist relations, Asa Welch ’16, says that Occidental has many attributes that make it the perfect place for burgeoning music professionals.

"The [small] size has definitely helped," Welch says. "With hard work it’s been really easy to create what we have so far, which is a really good infrastructure. It’s great because it’s easy to meet people. Being a liberal arts school, you get a lot of great talent."

Oxy’s proximity to Hollywood is helpful to club members as well.

"We’re in the right place," Welch says. "What’s so great is we’re in L.A.; I’m from Boston, where the music industry isn’t really thriving, but here you have endless resources and opportunities."

Although RAW is still, well, raw, the club has already provided unforeseen opportunities for a wide variety of students. Soraya Sebghati ’16 is a singer/songwriter who has performed gigs across the United States with the youth music program School of Rock. Although she had more real-life music experience than most incoming freshman, Sebghati says that the recording process is still daunting. However, thanks to RAW, she doesn’t have to worry about paying for expensive studio time or tracking down accompanying musicians on Craigslist.

"It’s a lot easier when you don’t have to go through that," she says. "It’s nice that we have a community of musicians here to pick from."

She says that the club is one of many reasons she’s glad she came to a small liberal arts school.

"If I were learning music in an art school it might remove some of my love for it because it becomes a task as opposed to something that I just really like to do," she says. "Also, I just really like learning other stuff. When you’re with artists all the time it gets really competitive and really crazy and you kind of lose sight of yourself and your goals."

In addition to being able to collaborate with fellow musicians, artists affiliated with RAW also have access to students like Gabriel Bethke ’16, a trained recording engineer who cut his teeth recording music for relatives involved in Minneapolis’ hip-hop scene.

"I showed up and people knew I knew how to record music," Bethke says. He was immediately enlisted by RAW’s former leaders to help build the recording studio.

"Not many people have a chance to do that, let alone a college freshman."

Bethke says he and his fellow engineers are able to cover a wide breadth of styles due to Oxy’s eclectic student population. Since the College doesn’t currently offer specific music engineering classes, the hands-on training is priceless.

"It gives students the opportunity to do something they want to do later in life, for free," he says.

While most students involved with RAW have their eyes on future careers in the music industry, Welch is confident that the club will begin to make an impact sooner rather than later.

"I just want to become as close to a professional record label as we can, and I think that Oxy has the resources so that we can do that," says Welch, who will maintain his role of behind-the-scenes hype man during his sophomore year. "We have three more years to make it happen, so anything is possible."