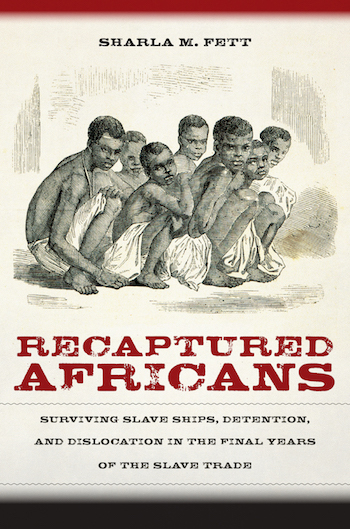 An Occidental College history professor’s 2017 book exploring the little-known story of Africans who found themselves in the United States after being seized from illegal slave ships has been named a finalist for one of the most prestigious awards for the study of the African American experience.

Sharla Fett’s Recaptured Africans: Surviving Slave Ships, Detention, and Dislocation in the Final Years of the Slave Trade (University of North Carolina Press), is one of four finalists for the 20th annual Frederick Douglass Book Prize. Jointly sponsored by the Gilder Lehrman Institute of American History and the Gilder Lehrman Center for the Study of Slavery, Resistance, and Abolition at the MacMillan Center at Yale University, the $25,000 prize recognizes the best book on slavery, resistance, and/or abolition published during the preceding year.

"This announcement is particularly meaningful to me because I eagerly follow the Frederick Douglass Book Prize each year," Fett said. "I read, study, and often teach the finalists' books. The selected works demonstrate the global scope of enslaved peoples' struggles for emancipation. Being part of an all-woman finalist list that also recognizes outstanding African American scholars makes this an important year for the Gilder Lehrman Center and a deep honor for me."

The other finalists are: Daina Ramey Berry for The Price for Their Pound of Flesh: The Value of the Enslaved, from Womb to Grave, in the Building of a Nation (Beacon Press); Erica Armstrong Dunbar for Never Caught: The Washingtons’ Relentless Pursuit of Their Runaway Slave, Ona Judge (Simon & Schuster); and Tiya Miles for The Dawn of Detroit: A Chronicle of Slavery and Freedom in the City of the Straits (The New Press).

The winner will be announced following the Douglass Prize Review Committee meeting in the fall, and the award will be presented at a celebration in New York City on February 28, 2019.

A jury of scholars that included Catherine Clinton of the University of Texas at San Antonio; Ada Ferrer of New York University; and Sandra Elaine Greene of Cornell University selected this year’s finalists from a field of more than 70 nominations.

The jury described Fett’s Recaptured Africans as "an outstanding study that focuses on those Africans who were retrieved from slave ships after the criminalization of the trans-Atlantic slave trade and who were then settled temporarily in the United States. Known as recaptives, this group of roughly 1,800 African children, men, and women, were then eventually resettled in West Africa (specifically Liberia) with support from the American Colonization Society.

"Fett does an excellent job positioning the book in relation to the larger literature on this subject. Her contextualization of the study only encourages the reader to explore the topic in greater depth. The book expands wonderfully on how the recaptives were depicted in public representations and in ethnographic mid-19th-century literature, how these depictions sought to distinguish them from the much longer resident African Americans, and how African American activists defied these efforts by supporting the recaptives and working to redefine them as members of the human family.

"Fett emphasizes, in particular, the liminal space occupied by the recaptives: how they were treated legally, given both domestic and international political prejudices, but also what the recaptives’ experiences of enslavement were like, and what it meant to them. It is an extremely compelling story, accessible to any interested reader."

The Frederick Douglass Book Prize was established by the Gilder Lehrman Institute and Gilder Lehrman Center in 1999 to stimulate scholarship in the field by honoring outstanding accomplishments. The award is named for Frederick Douglass (1818–1895), the one-time slave who escaped bondage to emerge as one of the great American abolitionists, reformers, writers, and orators of the 19th century.