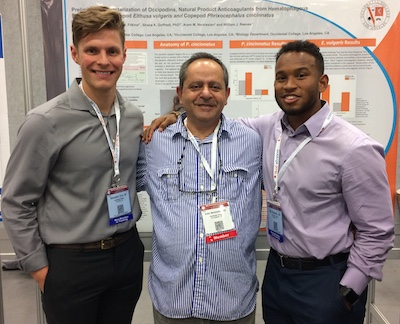 Recent Occidental graduate William Reeves ’16 was honored by the American Society of Hematology for his abstract about a novel blood anticoagulant that he, his student colleagues and a biochemistry professor discovered and have proposed naming Occipodin (no, that was no accident).

Reeves accepted the $500 Abstract Achievement Award at ASH’s annual meeting this December 3-6 in San Diego, where he presented his research.

Reeves worked closely with associate professor of biochemistry Aram Nersissian and two other recent graduates, biochemistry majors Alexander Urry ’16 and Alexandra Filkins ’16, in Nersissian’s research lab. Together, the team identified and characterized the novel anticoagulant protein and proposed to name it Occipodin in honor of the College.

"I’m still in shock," says Reeves, who is preparing to take the MCAT while tutoring math in Compton and Tijuana, and plans to attend medical school. "I remember Alex Urry initially bringing me on board, and at that time I felt extremely fortunate to be a part of a research project I was interested in. I never thought in my four years I would be a part of a published and awarded project." (Filkins is currently involved in cancer research at Memorial Sloan Kettering Cancer Center in New York, while Urry is in the Bay Area at UC San Francisco's Gladstone Institute.)

The research was a collaborative effort between the chemistry and biology departments.

"The acceptance of the abstract (fewer than 3,000 have been accepted out of about 6,000 submitted) and subsequent award is already a testimony that the hematologists’ scientific community has recognized our discovery and suggestion for naming it in honor of our College," Nersissian says.

"Getting the award means a lot to our team and more importantly shows the value and bright future ahead for the project," Reeves adds.

Urry initiated the project by bringing two marine parasites, P. cinncinatus and E. vulgaris, to Nersissian’s attention, which he was studying with associate biology professor Shana Goffredi. Similar to leeches, the parasites anchor onto a host fish and feed off its blood. Nersissian suggested his students see if the parasite contained an anticoagulant to facilitate its bloodsucking. Sidelined by a football injury and already enrolled in Nersissian’s Chemistry 395 Directed Research course, kinesiology major Reeves took the lead in the research project.

Sure enough, the students found that the parasites contained an anticoagulant—but one that works in a way that is different than any previously discovered natural anticoagulant. This discovery has already elicited interest in the medical community, according to Nersissian, due to its potential therapeutic and research applications. Specifically, it could serve as an alternative to the more widely known Heparin and Hirudin blood-thinners, he says.

"This protein is completely different from any other natural anticoagulant that was ever found," Nersissian says.

Further study is needed in order to fully understand Occipodin so that it can potentially be applied to clinical use in the future, he says. However, the interest in the finding at the recent ASH conference "exceeded all my expectations," Nersissian says. "It’s one of the biggest and most prestigious medical conferences in the world, and people were lined up to talk to Will." Nersissian and his students—including Reeves—are already preparing samples of Occipodin to send to medical school researchers.

"Will deserved everything he got," Nersissian says.

The students’ research was funded in part by the Stauffer Charitable Trust along with Occidental’s Undergraduate Research Program. All three students were recipients of Stauffer Summer Research Fellowships, which were established six years ago specifically for chemistry research students who have already graduated from college but have expressed interest in continuing their research during the summer following graduation.