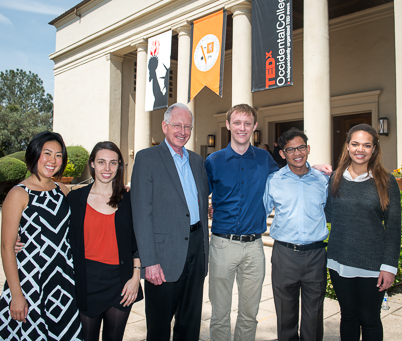 Five Oxy students were among the speakers at the first-ever TEDx Occidental on March 29 -- a cross-generational and thought-provoking exploration of how and why the American Dream is being reinvented.

Divided into three sessions -- What Is It? Who Has It? How Do We Get There? -- the day-long program in Thorne Hall explored many different American dreams. While the speakers and their subjects were diverse, many stressed the importance of family, community and inclusion.

There were reminders, too, that the traditional American Dream is still alive -- symbolized by the simple white picket fence backdrop on stage. At the beginning of the day, Sanjeev Khagram, Occidental’s John Parke Young Chair in Global Political Economy, recounted how his family was expelled from Uganda by the dictator Idi Amin in 1972 and lost everything.

"I asked my parents why they chose to come to the United States, and they said, ‘Because you can realize your dream there,’" said Khagram, one of the faculty advisors to the TEDx student organizing committee. "That’s one theme we want to share: all American dreams are based on sacrifice -- of parents, families, communities -- and that sacrifice is worth it."

Judging from the large crowd’s reaction, the Oxy student speakers were among the most popular. (Videos of all 15 speakers will eventually be posted online.) They were:

Other members of the Oxy community who were featured speakers were venture capitalist Dave Berkus ’62, who spoke about the importance of learning from one’s failures, and Ella Turenne, assistant dean for community engagement, who spoke about the need to extend the American Dream by making a college education available to incarcerated people.