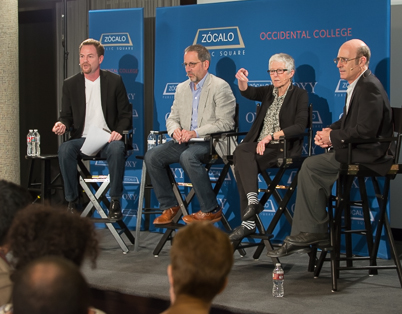 Scientists, journalists and water managers came together to discuss the global water crisis at an October 13 Zócalo/Occidental College conference at the Pacific Design Center, "How Will We Survive the Water Wars?"

"Water—for the first time—is really, truly scarce, and the price is going up," Solomon said.

North noted that a shortage of water has spillover effects. "The Rim Fire"—the quarter-million-acre fire that broke out this August in Yosemite—"would not have been so bad had the forest had a normal moisture content."

Russell observed that water prompts a lot of moralizing, with people made to feel guilty for having lawns or taking long showers. But, he asked, given that about 70 percent of water use is devoted to agriculture, what about focusing on larger institutions?

Lempert said that larger institutions are important, too, but "consumers need to be part of the equation."

Famiglietti said that one of the most important areas on which to focus is conservation of groundwater, which is currently like a bank account that’s being drawn down without anyone noticing or replenishing it.

Regardless of the solutions they offered, the panelists were in basic, if wary, agreement on one point: To fix our water struggles, more government regulation and centralization of water policy is required at both at the state and national levels.

The conference ended on a hopeful note. Atwater predicted, based on looking at the past 30 years in trends, that we will continue to become more efficient and that our per capita consumption will be about half of what it is today.

Austin concurred, saying that outdoor landscaping is where she thinks we’re going to make the biggest strides.

This academic year, Occidental is undertaking a new campus-wide initiative that is organized around the critical resource of water. To coincide with the 100th anniversary of the California Aqueduct, the theme of water and power in Los Angeles, and the world, is infused throughout the curriculum, setting the stage for an integrated series of activities and events and prompting meaningful conversations on how we think about and address these great challenges of water and power. As part of this initiative, Occidental is hosting speakers on campus, as well as off-campus in partnership with Zocalo Public Square.