On a Roll | Occidental College 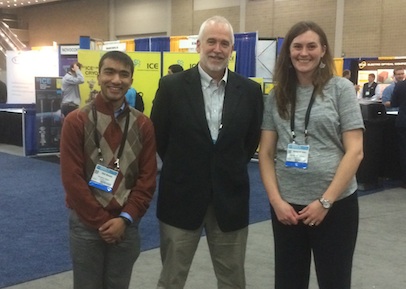 Oxy physicist George Schmiedeshoff is on a roll.

His latest proposal to continue his study of quantum phase transitions – around which unusual states of matter can form under extreme conditions – has been funded by the National Science Foundation. The third year of this latest award will mark his 20th consecutive year of NSF support, with a lifetime total of more than $1 million in federal funding.

His sterling record of basic scientific research has also meant "plentiful research opportunities for students," says Schmiedeshoff, who has taught at Oxy since 1992. "I’ve got a pretty good history of getting students involved building gadgetry and helping to run experiments, especially as part of Oxy’s Summer Research Program."

Of Schmiedeshoff’s more than 50 peer-reviewed publications, 15 have undergraduate student co-authors. Since 1995 he has brought 12 of his students to the National High Magnetic Field Laboratory in northern Florida to assist with experiments that he has run there. (Due in part to this exposure, the Lab recently singled out Oxy as one of a handful of colleges and universities with a high rate of women physics majors.)  He has also brought Oxy students to Los Alamos National Laboratory in northern New Mexico and Ames Laboratory in central Iowa.

The affable scientist studies solids, usually metals, under extreme conditions – usually very low temperatures and very high magnetic fields. The electrons in these metals usually undergo phase transitions to other kinds of states (not unlike liquid water changing to steam or ice, its gas and solid states).

"In my Oxy lab I have a superconducting magnet that can produce fields almost 200,000 times stronger than the magnetic field of the Earth, and a refrigerator that can reach temperatures almost 10 times colder than interstellar space," he says.   "With these tools I can do quite a bit of work on campus, and then move the experiment to a national lab for higher fields, or lower temperatures, or both."

Schmiedeshoff and his students measure a quantity called thermal expansion. "When most materials heat up they expand, and when they cool down, they contract, but not always: water expands as it freezes, for example, so it’s a bad idea to use glass containers to make ice," Schmiedeshoff says.  "My students are always surprised by the amount of useful scientific information that can come from this kind of measurement, and that’s what my miniature dilatometer was designed to do," he says.

His development of a miniature dilatometer that can measure changes smaller than the diameter of a hydrogen atom in the thickness of materials has attracted considerable attention, including from Quantum Design, a private San Diego firm interested in producing their own deceptively simple-looking devices. Dilatometers of his design are running in national laboratories and universities around the world.

"I can’t begin to tell you how proud I am of all of my students," Schmiedeshoff says. "I’ve been very lucky."