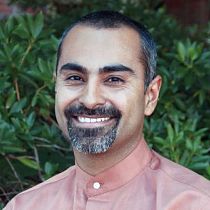 The assignment: meet with one of the co-founders of LinkedIn and entrepreneurs, investors, and government officials from five continents to learn how to foster innovative start-ups, spur economic growth and create jobs.

For students in Professor Sanjeev Khagram’s class in entrepreneurship and innovation, YouNoodle’s inaugural YN1K conference in San Francisco was an opportunity to conduct client research, network, and catch a glimpse of the future.

Khagram, Oxy’s newly recruited John Parke Young Chair in Global Political Economy, is a man on a mission. "What I’d like to do is dramatically increase entrepreneurship among Oxy students – not in the narrow commercial sense, but to encourage students to be entrepreneurial leaders in all aspects of their life and career, whatever field they go into."

Paradoxically, according to Khagram – a former professor of public policy and business at Harvard and most recently of international studies and public affairs at the University of Washington – one of the keys to success is failure, or at least the willingness to fail.

"That’s the secret sauce inside Silicon Valley – the value placed not just on creativity but on risk and failure," the Stanford Ph.D. says. "From failure people learn. I want my students to learn to feel comfortable in taking risks, to innovate in ways that could fail, and learn and improve from those experiences over a lifetime."

That means building on the critical thinking skills traditionally taught at Oxy, he says. "Critical thinking is one of essential tools entrepreneurs use. But so is creative problem-solving. We want our students to imagine the new, the possible, the emergent. We want to bring these new dimensions into the liberal arts model."

Alexander Keat, a sophomore diplomacy and world affairs major from Philadelphia, had no idea what to expect when he signed up for the course. Attending the YN1K conference "probably changed my life," he says. And the class itself? "Mindblowing." So inspired was Keat that he resurrected and re-imagined Oxy’s entrepreneurial club as "Oxypreneurship," which will begin to offer programming this spring.

Keat and the other students in Khagram’s diplomacy and world affairs class worked as a team to conduct research for a real-world client -- Rebeca Hwang, the head of YouNoodle, a social enterprise that seeks to promote global entrepreneurship and innovation through networking, collaboration, and education.

At the end of the semester, the DWA 410 team reported to Hwang (a former student of Khagram’s when he taught at Stanford University) on three related issues:

"The whole point of the exercise is to conduct rigorous action research that can be immediately used on by a real-life partner," Khagram says. "The class will have a different client each year. And word seems to be getting around -- I’ve had a lot of questions about when I’ll be teaching the class again and what the topic will be."