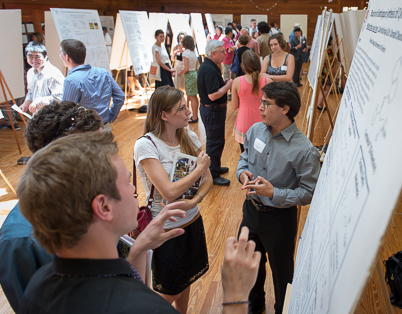 Occidental students and alumni are gathering honors like spring flowers in what is shaping up to be a record-breaking year.

Eleven Occidental College seniors and alumni (and one freshman!) have won prestigious Fulbright scholarships to work and study abroad, breaking Oxy’s single-year record of 10 set five years ago. (With five Fulbright alternates this year, that number could go up even more.)

Bianca Fonseca Cervantes '14 has received a Truman scholarship. She was one of four finalists from Oxy. Trumans are highly prestigious and competitive federal scholarships awarded to college juniors who show leadership potential and have an interest in government or public sector service. Each award is for $30,000, to be used toward graduate study.

Elizabeth (Libby) Evans Blanchard ’06 has received her second Gates Cambridge Scholarship to pursue her Ph.D. in geography, focusing on environmental issues.  Blanchard is Occidental's first Gates Scholar. She received the award last year to pursue her M.Phil. degree in environment, society and development at Cambridge. Blanchard was one of only four current Gates Cambridge scholars who were selected for a second scholarship.

Two alumni have received National Science Foundation Graduate Fellowships: Carly Phillips ’12, who is studying ecology at the University of Georgia, and Nicole Ing ’12, who is studying biomaterials at UC Irvine.  Phillips will receive full funding of her graduate work for five years. The two are the 28th and 29th Oxy alumni to receive NSF graduate fellowships.

Tamara Shogaolu ’08, currently a graduate student in Film Studies at USC, has been named a Luce Scholar.  Shogaolu is the 15th Luce Scholar from Occidental since this award was initiated in 1974, and the College's fourth winner in four years. (Only Yale has also had four winners in four years.) She will be placed in a major Asian city, connected to important institutions and people in her areas of interest, and given a year of financial and administrative support.

Cullen Faulwell ’14 has received a Barry Goldwater scholarship, the first Goldwater for an Oxy student since 2007, and the 34th overall.  The award allots up to $7,500 to incoming seniors and is given to students intending to pursue careers in math, science and engineering fields.

Juan German ’12, who turned down a Fulbright last year to participate in the Congress Bundestag Youth Exchange, has been awarded a Thomas R. Pickering Graduate Foreign Affairs Fellowship ($40,000 each year for a two-year master's program), which he will use for graduate work at Carnegie Mellon University's Heinz College. He was also a finalist for the Charles Rangel International Fellowship.

Samantha Sommer '14 has been honored with a Davis Projects for Peace award, a program in which undergraduates design grassroots projects to promote peace. Proposals deemed most promising and feasible are funded at $10,000 each.

Cholpon Ramizova '15 and Janan Burni '15 have received Critical Languages scholarships. A program of the U.S. Department of State, it offers undergraduates intensive summer language institutes in 13 critical foreign languages such as Chinese, Russian, and Hindi.

John O'Neill '14 has received the Strauss Foundation Scholarship. He will work on crafting a public service project this summer that will be implemented in his senior year.  Ben Kowalczyk '13 was awarded a San Francisco City Hall fellowship, and will defer entrance into UCLA Law School for one year to accept it.

Daniel Watson '13's film It Ain't Easy Being Green won three awards at the 19th Annual UCLA Shorttakes Film Festival: Best Drama, the Audience Award, and Best in Show. It was chosen from more than 80 short films submitted by graduate and undergraduate students from across the country.

Raffy Cortina ’13 has been awarded a 2013 Student Academy Award from the Academy of Motion Picture Arts and Sciences for his short film Bottled Up –- the first Occidental student to win in the 41-year-old national competition.

And that’s just the tally so far.

Occidental has two finalists for the Marshall Scholarship (Megan Lang ’14, Ethan Weiss ’14). Marshall Scholarships provide 40 exceptional American students each year with two fully funded years of graduate study, with a possible third-year extension, at any university in the United Kingdom, applicable to any field of scholarship.

More information on awards available to Occidental students and how to apply is available at the College's Office of National Awards.