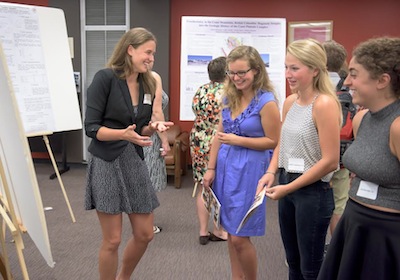 One hundred and six vacation-averse Occidental College students spent 10 weeks this summer doing research with faculty mentors on campus in disciplines ranging from economics to chemistry to art history.

July 29 saw the culmination of their efforts during the day-long Summer Research Conference, when the dozens of student scholars presented the fruits of their research in the form of 20-minute talks and poster presentations on campus. Research topics ranged from sibling bonding to urban oil drilling to the mechanism of the antidepressant Cymbalta.

"This may be the students’ first experience presenting their scholarly work in a public setting, and it may be the culmination of years of effort," says geologist Scott Bogue,  director of sponsored and undergraduate research and associate dean of the College. "We are very proud of the work they have done, and hope that this experience will help set the stage for their life-long journeys as scholars and researchers."

Eclectic research topics included "Beautiful Androgyny: The Disruption of Traditional Gender Roles in Women’s Surrealist Art,"  "Love of the Underground: On the Lives of Dostoevsky and Tolstoi," "Stem Cell Fusion With Neurons: An In Vitro Study" and "Sneaky Snails: Investigating a Novel Family of Venom Peptides." Some of the research these undergraduates are participating in is potentially groundbreaking, with real-world applications.

Psychology major Caitlin Lingelbach ’16 of Silver Spring, Md. used rats to study whether sibling bonds alleviate stress. "I was really interested in being able to develop and spearhead a project on my own," she said. "I wanted to get a taste of what doing research is like, since that’s what I’ll be doing in grad school. I also wanted to learn more about doing statistical analysis." Even though the results of her study proved inconclusive, "I learned way more than I ever could have in a classroom," she said.

Lingelbach says she plans to pursue a Ph.D. in clinical psychology and is particularly interested in attachment theory as it relates to geriatric subjects, a "really understudied population."

Grace Coogan ’17, a biology major from Princeton, N.J., studied population patterns of California’s state fish, the bright-orange garibaldi. Some of her work was more "tedious" than she expected.

"I spent a good three weeks in the lab just grinding down otoliths [fish inner ear bones] to determine the fishes’ age," she said. (These bones can be read somewhat like tree rings, she explained.) However, she says, "Now that I have results it makes it mean a lot more. It makes it worth it."

"L.A. sits directly atop the nation’s largest urban oil field, and people don’t even know," she said, pointing out that the oil drills are disguised to blend in with the environment. "Right now you can have drilling anywhere and everywhere –- there’s no buffer zone." Poor communities are impacted the most, she said.

"The research is really practical and community-based," the environmental management major said of her experience doing research at Oxy. "It’s on the ground. I like the UEPI professors’ support. They really helped me understand what is going on here in L.A."

The objectives of the summer research program at Occidental are to sponsor faculty/student collaborative research; provide an academic alternative to nonacademic summer jobs; increase students' preparation for leadership roles; create an intellectual community with opportunities for interdisciplinary exchange; enrich the academic experience of the most capable and promising students; and encourage good students, especially students from underrepresented groups, to consider careers in the scholarly professions.

Fellows are expected to work full time on their research and are not permitted to hold other jobs during the fellowship period. Support is provided by the College and by endowments, grants and gifts from many sources. The program is highly selective, and some preference is given to students who are completing their junior year and have had no prior summer fellowship support. Summer research fellows receive a stipend of $390 per week.

Occidental has supported undergraduate research for more than three decades in all of the disciplines -- the arts, humanities, social sciences, and natural and physical sciences. The Summer Research Program has helped place the College at the forefront of national liberal arts colleges.