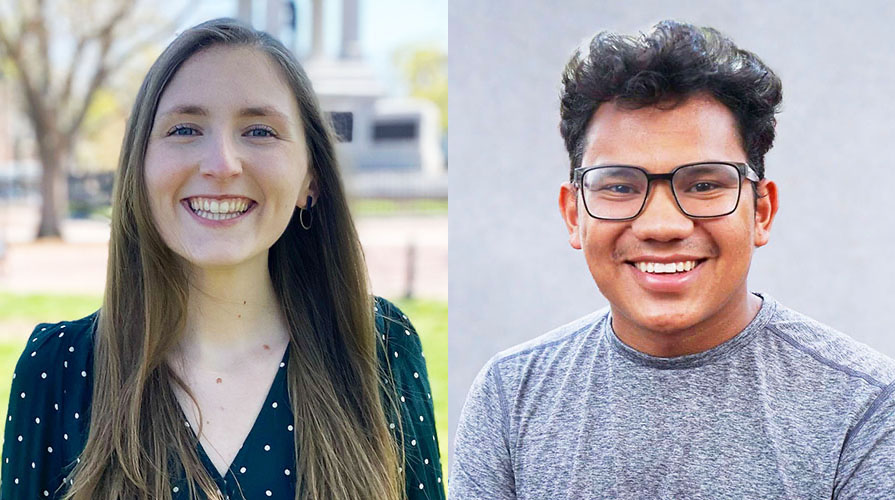 Anne Marie Crooke ’19 has been awarded a National Science Foundation Graduate Research Fellowship, awarded annually to candidates in the sciences and social sciences who are pursuing a master’s or doctoral degree. Crooke is currently pursuing a Ph.D. in chemistry at Harvard.

Adrienne Adams ’17 is the recipient of a Ford Foundation Predoctoral Fellowship, which seeks to increase the diversity of the nation’s college and university faculties by increasing their ethnic and racial diversity. Adams is doctoral student in the USC American Studies and Ethnicity Department.

Arriving at Harvard “really contexualized how special my undergrad experience was,” Crooke says. “Oxy’s a special place. It shaped the way I think about science, and now I realize how well rounded my science education was.”

Crooke was one of 2,074 students offered an NSF Fellowship out of the more than 20,000 who applied. The fellowship provides a $34,000 living stipend and $12,000 per year for tuition for three years to individuals who have demonstrated their potential for significant achievements in science and engineering research. Crooke is one of more than three dozen Oxy alumni who have received NSF fellowships.

Like Crooke, Adams credits their Oxy experience as a foundation for future success. “The connections that I formed with Oxy faculty, staff, and peers continue to enrich my life and education,” Adams says. “In my graduate school and Ford applications, I wrote extensively about the original research that I conducted under Prof. Heather Lukes during Oxy’s summer research program and for my senior comprehensive.”

Adams is one of only 70 doctoral students to receive a Ford Predoctoral Fellowship this year out of roughly 2,000 applicants.