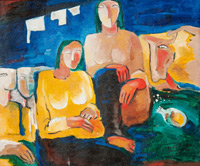 A colorful new art exhibit, "A Post-Colonial Renaissance in Vietnam," is brightening the walls in the AGC Administration Center lobby on the Occidental College campus.

21 paintings, by 15 artists born between 1928 and 1965 throughout North and South Vietnam, are on loan to the College from trustee Anne Wilson Cannon ’74. They will remain on display at least through Alumni Weekend in June.

"The idea of lending my Vietnamese art collection to the College came to me during [President] Jonathan Veitch’s presentation of his vision of the College to the board of trustees at the June 2010 meeting," Cannon, an independent financial adviser and certified public accountant, explains. "One section focused on Oxy’s connection to Asia, with its location on the eastern side of the Pacific Rim. Later, he introduced another topic as ‘Oxy and the Arts.’ He envisioned bringing the arts to the College, with art exhibitions being one example. That got my attention!"

The paintings in the exhibit span the years from 1988 to 1998, a period of time immediately following the lifting of the crackdown on artistic freedom by the communist government. The oldest artists represented were born under French occupation and survived two wars and the repression that followed the Viet Cong victory, but even the youngest artists experienced war and repression. Buu Chi, for example, was a leader in the student anti-war movement who was imprisoned by the government of South Vietnam from 1972 to 1975. The lost years of Buu’s youth are reflected in his paintings. Nguyen Than, a Catholic from the north whose family relocated to the south to avoid religious persecution, destroyed all of his works of art when the south fell to the communists. 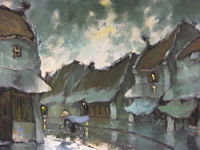 Some of the painters are classically trained, while others are self-taught. Many have exhibited internationally. One of the artists, Le Thanh Son, has paintings in the collections of Bill Clinton, Bill Gates and Prince Andrew.

The artists' mediums include acrylic on paper; oil on canvas and card; lacquer on board; pastel and gouache on paper; gouache and watercolor on silk; and gouache on poonah paper, a special paper made from the bark of the rhamnoneuron plant. The painters draw varied inspiration from the native landscape, French Impressionism, classical music, Japanese poetry, family members, the animals of the Chinese zodiac, Asian folk and fairy tales, cityscapes and ancient pagodas.

The paintings on exhibit are Cannon’s favorites of her 75-piece Vietnamese art collection, she says. "I am particularly fond of the paintings created by Do Quang Em, Buu Chi, Le Thanh Son, Nguyen Than and Pham Viet Hong Lam." 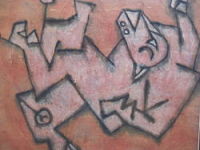 "I find Vietnamese paintings to be very accessible to the Western eye," says Cannon, who began collecting Vietnamese art in the early 1990s when a friend in Hong Kong asked if she would like to become a partner in a gallery she was creating that would specialize in contemporary Vietnamese paintings. "Although the French influence is very much in evidence in the techniques used and the styles, the paintings reflect the lives of the Vietnamese people and Vietnam’s beautiful countryside. I have been impressed by the optimism expressed by the artists and other people I met in Vietnam."

Cannon’s role in the partnership was to represent the gallery in the United States by holding exhibitions at her home in Greenwich, Conn. "Vietnamese art was just beginning to make small waves in the international art scene," she recalls. "I made my first buying trip to Vietnam--Hanoi and Ho Chi Minh City--in November 1993, and several more trips through 1999, including one to Hue. I fell in love with the art and developed friendships with several artists."

All of the paintings currently on exhibit at Occidental are normally on display in Cannon’s  home. "Bringing them to Occidental left a lot of bare walls in my house," she said, but it is worth the temporary loss because "It seemed to me that the Oxy community, and perhaps beyond, could benefit from exposure to my art collection in many ways. From an educational standpoint, I could see art and art history students learning from the collection, as well as history, Asian studies, politics and economics students. I hope the exhibit helps pique an interest in Vietnam. Also, I hope everyone who sees the exhibit will find something inspiring, even simple pleasure."