Like to dance? Or want to learn? Interested in other cultures? In ancient musical traditions? Looking for exercise that’s also FUN?

The Folk and Historical Dance Troupe is devoted to exploring a variety of traditional cultures, especially those of East and West Europe and North America, although we’ve ventured into the Near and Far East and occasionally Africa, searching for roots.  We teach the dances from scratch, exploring non-mainstream music and rhythms (ever try 7/8?  or 11/8?); we sometimes even learn the dance songs in their original languages— linguistic discussions erupt often.  And from time to time we perform, as we feel inclined— for which purpose we have a considerable collection of costumes.  We also aim to have fun!  Although we work to keep our dance styles authentic, we focus on helping each other rather than criticizing.

The Troupe is one of the oldest continuously running communities at Oxy (since 1971), and certainly the broadest.  We draw members from students, faculty, staff, alumni, and sometimes their families.  If you want to develop strong and long-lasting bonds of friendship, this is a great place to start.  It is also a wonderful form of total exercise: aerobics has nothing on a Bulgarian kopanitsa!

In choosing folk dances, we’re particularly partial to East Europe (Slavic, Greek, Hungarian, Romanian, etc.) and America "north of the border".  (We have avoided Hispanic dances so as not to compete with the intermittent Oxy Folklorico groups.)  In 2012-13, for example, we gave two costumed shows of Southeast European dances at UCLA’s Fowler Museum of Cultural History, and we produced three "open" dance events for the Oxy community: square dancing (taught, while calling, by the very funny Oxy/Troupe alum Paul Waters), Israeli dancing (hosted by Hillel and taught by Oxy/Troupe alum Steve Wexler), and Viennese waltzing (see below).  We also brought in a well-known Croatian dance teacher to give the Troupe a workshop.

We like to explore the historical roots of our dances, generally from medieval and Renaissance times onward.  For example, we may give a mini-show demonstrating the origins of square-dancing or of the Charleston, or demonstrate Renaissance dances for a music or history class.  We are so fond of the Viennese waltz that for nearly 30 years we have joined forces with the Oxy/Caltech Orchestra to put on an annual Viennese Waltz Night, sometimes at Oxy and sometimes at Caltech.  The orchestra plays Viennese waltzes and polkas all evening, and the Troupe helps people learn the dances and gives one or two exhibition performances.  In February 2013, for example, the Troupe performed its own choreographies of Strauss’s "Kiss Waltz" and the Csardas from Die Fledermaus (beautifully sung by Oxy alumna and Troupe member Sharon Sheffield).  Youtube still has a nice video, called Viennese Waltz Night @ California Institute of Technology, of us performing Lehar's "Gold and Silver Waltz" in Caltech’s Dabney Hall in 2010.

When a possible performance arises, we ask the members whether or not they want to do it.  No one is required to perform (you can just come and learn).  But if you say you will perform something, we then require that you honor that commitment, faithfully attending all rehearsals for it and the performance(s).  Some shows are long, some short; but the sense of belonging to a team is very strong ever after!

How to Join Us

WHERE: Dance Studio (in Alumni Gym complex, beside the fountain).

NO AUDITION NECESSARY: just come, preferably early in the term (so you can learn the dances when they are taught). 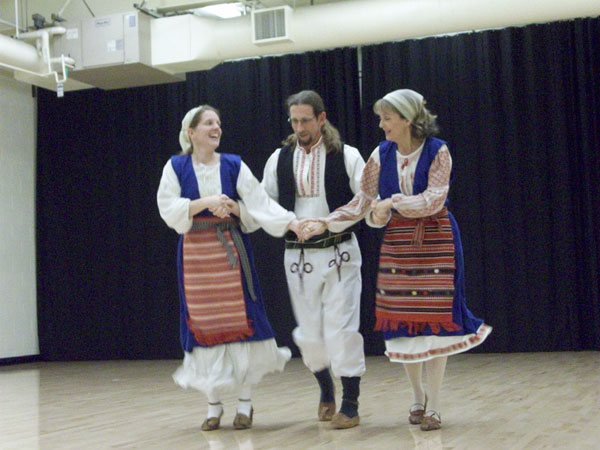 The Folk and Historical Dance Troupe began in January of 1971, when two frosh (both Russian majors) learned that two of their professors knew Russian dances.  The founders were Dr. Elizabeth ("Betchen") Barber (who taught linguistics and archaeology, had been folkdancing since she was a child, and had a collection of dance records), Dr. Gilman ("Gil") Alkire (who taught Russian language and literature and had spent time in Russia), and students Betty Schnur (now a doctor) and Laurel Gray (now running a Central Asian dance troupe professionally).  Betchen Barber has run our Troupe ever since (despite retiring from her regular teaching in 2007), with the help of Gil Alkire (until he retired), Dr. Stuart ("Stu") Elliott (who danced with us from fall of 1971 until 2012, when he turned 84!), and Dr. Alan Knoerr (who joined when he came to Oxy in 1991 and is still on the faculty).  In addition to student members, we have often included Oxy staff as well as family members of faculty, staff, and alumni.  It is the only Oxy group with such a cross-cutting membership (so it runs more like the Oxy/Caltech Orchestra than like other student clubs).  And it is the hard-working alumni who provide most of the ongoing stability of the group.

For our first 20 years, we gave a Russian dance show (in costume) annually for a two-term class in Russian culture and history, as well as another long show of our own (usually suites of dances from four countries, also in costume), and short shows for the French and German clubs.  And when the Oxy/Caltech Orchestra began to host a Viennese Waltz Night, we started choreographing and performing one or two waltzes as ice-breakers for that event—starting in 1984 and continuing to the present.  We also did many little shows, both on and off campus.  After the demise of the Russian culture course, however, we had to rethink ourselves and began to give a more ambitious annual show consisting of one or more folk tales "told" in the dance styles, music, and costumes of the tale’s country of origin.  Over the next 20 years, these included Russian, Polish, Hungarian, Bulgarian, Greek, Tyrolean, Irish, and American tales.  As one of the faculty children said after a show she was in, "Where will you take us next??"  We are now in the process of rethinking ourselves yet again.  Who knows where this will take us?  But one thing is certain: we won’t stop dancing!