Meet Mariška Bolyanatz Brown of Spanish & French Studies and linguistics, a linguist whose work focuses on socially conditioned variation in speech production and perception in Spanish. 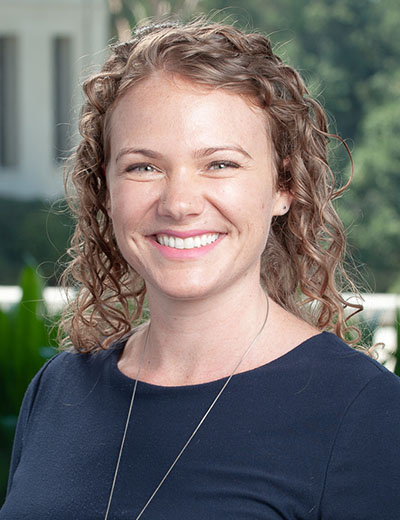 She uncovers the social meanings attached to phonetic variants, and determines what implications these associations have for speakers and their interlocutors.

So many things. The vibrant student population, the engaged faculty, the diversity of the LA backdrop—Oxy has it all!

Of the classes you have taught at Oxy, which is your favorite and why?

I have to say two classes: Introduction to Linguistics (Ling 301) is a delightful way to introduce students to the world of thinking about language in a new way—or, perhaps, thinking about it consciously for the first time. Many of my former students have reported their excitement as they hear and can name a type of speech error on a podcast, or notice the close connection between variation in speech production and discrimination in the United States. The second would have to be Spanish in the United States (Span 342). In this course, students conducted mini fieldwork projects in Spanish-speaking communities in L.A., and compiled original data currently being assembled for a publication. This course also drew close connections among current themes such as politics, racism, and education policy, as we explored the value-adding of maintaining Spanish as a heritage language.

An opportunity to explore, to be exposed to things you may never have imagined someone actually does for a living and that you might end up loving. I went to a liberal arts college and while I wasn’t always able to articulate the things I’d learned how to do, I was a more well-rounded person for having learned them.

Your dissertation examines the phenomenon of plural -s deletion in Chilean Spanish. Can you explain the socioeconomic implications of these acoustic cues?

My analysis of novel acoustic measures on the vowel preceding the deleted plural -s revealed nascent changes in progress. Specifically, young speakers use distinct acoustic cues to differentiate singular and plural words according to their respective socioeconomic groups, while older speakers have completely neutralized this contrast. I argue that these vocalic strategies are a dialect-internal innovation, motivated by phonetic, morpho-phonological, and social factors, and which have the potential to contribute to longer-term sound change. The broader (socioeconomic) implications of phonetic variation can be observed in a scenario like a job interview: if someone hears a speaker using an undesirable feature or set of features, they may be (consciously or otherwise) less likely to think of that person as competent for the job at hand, though the candidate may be fully qualified.