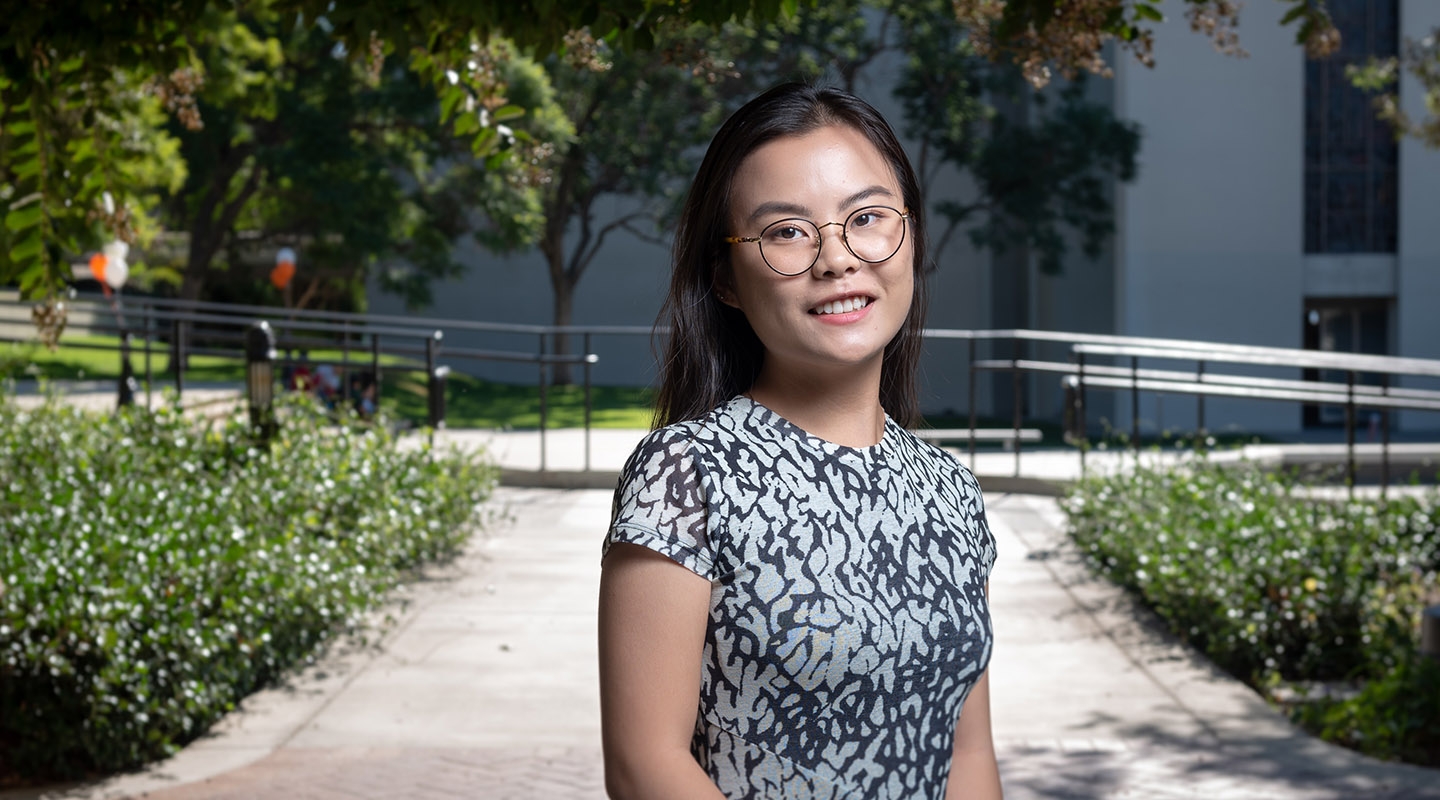 As a cognitive science major, Sally Zhou’s interdisciplinary path allowed her to perfect her writing skills while working with faculty mentors in the lab and doing an international research project. Now, she’s planning a job in speech language pathology after graduation.

Sally (Xinle) Zhou is what you call a polyglot. A lover of languages, she speaks English, French, Cantonese, Mandarin and the Shanghainese dialect. In high school, she became interested in neuroscience, particularly the scientific aspect of language: its biological essence and why we make the psycholinguistic choices we do.

After a year at Beloit College, Sally transferred to Occidental, which she found to be a much better cultural fit. She assumed she’d declare a biology or psychology major.

“But then I realized that Oxy had this cognitive science major that covers philosophy, computer science, neuroscience and linguistics,” she says. “It was pretty much everything I needed, and everything I liked.”

Cognitive science opens up so many opportunities in terms of career paths. People say, ‘I'm a psych major, I understand how psychology works.’ I do too, but I also understand computer science, neuroscience, philosophy and linguistics.

During her first semester, Professor Carmel Levitan invited Sally to help out in her research lab, where she got the chance to explore how the senses interact to influence a variety of cognitive states. Quickly finding a mentor in Professor Levitan, Sally assisted with eye tracking experiments and continued with the lab for the next three years. She also worked closely with Professor Alexandra Sherman on an EEG study measuring the activity of human brain waves in response to different speech stimuli.

Sally was eventually able to parlay the data collection and neuroimaging techniques she learned from the lab and her empirical research methods class into her own research project. The summer before her senior year, she applied for a two-month research project at the Chinese University of Hong Kong (CUHK) through Oxy’s Richter Research program, which provides student funding for research abroad.

While in Hong Kong, Sally wanted to focus on speech language pathology, and she was able to connect with a Ph.D. student from the university’s ENT surgery department who was studying the mechanism behind cochlear implants.

“None of the literature or empirical studies in the fields of ENT and speech language pathology included experiments on cochlear implant patients using neuroimaging techniques,” she explains. “There are risk factors associated with using functional magnetic resonance imaging (fMRI) machines in the presence of these implants, which contain metal.”

Fortuitously, the research facility at CUHK had a brand new functional near-infrared spectroscopy (fNIRS) machine that could produce neuroimaging for these patients safely using light instead of magnetism. So, Sally and her colleague conducted a pilot study assessing how both normal hearing and cochlear implant patients process speech in noise perception. They presented their research at the CUHK conference toward the end of the summer.

Though she appreciated the experience and did work she was very proud of, she says, the intensive and highly independent nature of that type of medical research made her realize she wanted to work more collaboratively.

“I like participating in discussions and brainstorming ideas, which is what I get here at Oxy with my professors. We meet weekly, and it’s always hands-on in terms of training and running experiments with participants.”

Rather than applying for research Ph.D. programs, Sally is now pursuing master’s programs for speech language pathology. She is excited by the prospect of working with people in a therapeutic context, specifically geriatric patients who have neurological deficits like aphasia as a result of a stroke or other accident.

“I really enjoy helping people and having a dialogue,” she says. “When there’s someone that’s really struggling and you see them get better, it’s very rewarding.

“And,” she adds, “if I get my master’s now, I can still go back to research later if I want. Cognitive science opens up so many opportunities in terms of career paths. People say, ‘I'm a psych major, I understand how psychology works.’ I do too, but I also understand computer science, neuroscience, philosophy and linguistics.

“I feel like I’m a person with a lot of tentacles in different areas.”

[Professors] really do care about you. They want to get to know you and make sure you’re doing well, academically and mentally.

The other invaluable component of her Oxy education, she says, is her professors. This has been important to her both academically and personally as an international student far from her family.

“They really do care about you. They want to get to know you and make sure you’re doing well, academically and mentally. Every single one of my professors offered me different kinds of care, which is incredible.”

Grateful for their support and for cheering her on through difficult classes and applying for the Richter grant, Sally’s advice to her peers is simple: build a strong relationship with your professors.