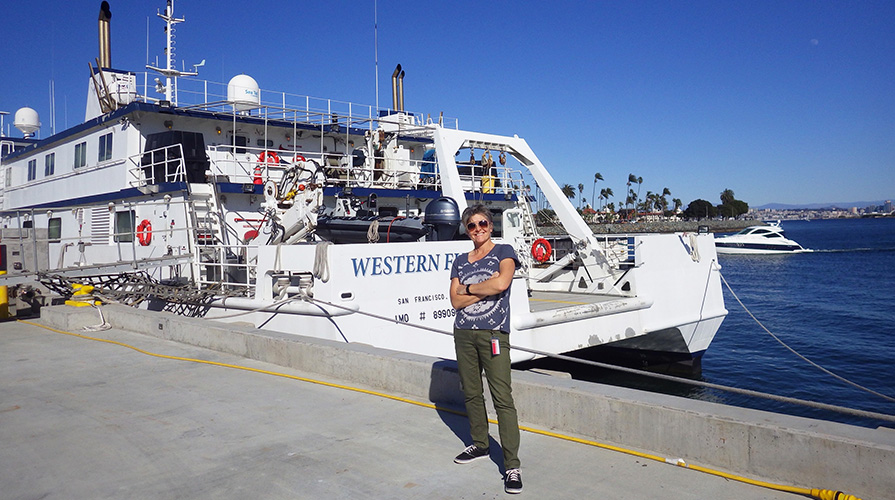 Meet Shana Goffredi of biology, who investigates the symbiotic partnerships between bacteria and invertebrates. Recently, she was chief scientist on a five-day research cruise exploring the deep sea off the coast of Southern California.

An active tectonic area, the Southern California Borderland is a diverse physical and chemical environment. The region is heavily trafficked by marine vessels, but relatively little exploration has taken place below the water’s surface.

Aboard the research vessel Western Flyer (pictured above), a collaborative research team consisting of animal biologists, microbiologists, ecologists, geochemists and submersible pilots visited five sites between 2,600 and 3,300 feet deep. Each was chosen as a unique natural laboratory where the cycling of carbon, sulfur, nitrogen and other nutrients could be investigated. The goal was to study the types and activities of specific groups of deep-sea microorganisms.

Symbiotic bacteria are fundamental to the survival of most animals, including humans, yet we are only now beginning to fully appreciate the diversity and pervasiveness of beneficial microbial partnerships.”

“There is so much we don’t understand about deep-sea habitats and the myriad lifeforms they support,” Goffredi says. “My primary research interest is microbial symbiosis—beneficial alliances involving bacteria and animals. Symbiotic bacteria are fundamental to the survival of most animals, including humans, yet we are only now beginning to fully appreciate the diversity and pervasiveness of beneficial microbial partnerships.”

The expedition was important in part because the scientists had visited a few of the same sites in 2013-14 and wanted to analyze how the communities have changed over time. They also studied variability among communities fueled by chemosynthesis—using chemical rather than solar energy.

“We have preliminary data to suggest that some animals collected during this expedition have formed specific partnerships with bacteria that use methane gas as their sole source of energy,” Goffredi says. “If true, this would certainly go against the conventional ideas about animal nutrition.”

Goffredi set up experiments onboard the ship to test this hypothesis, she said, and her students will be able to use a variety of techniques in the lab on campus to more fully investigate this possibility. She also suspects that several animal species collected on the expedition are new to science, though taxonomic experts will need to weigh in. Contributing to an accurate manifest of life on our planet is a fulfilling part of her job, she says.

“By all accounts, our expedition was a success. We met our research objectives and luckily hit a calm weather window with ferocious winds just before and after our time at sea. We had an incredibly hard-working group of scientists who are all excited to get back to the laboratory to work on their samples and solve the many mysteries of life in the deep ocean.”