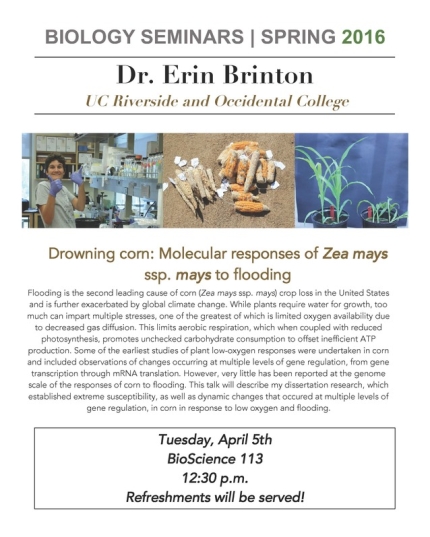 Flooding is the second leading cause of corn (Zea mays ssp. mays) crop loss in the United States and is further exacerbated by global climate change. While plants require water for growth, too much can impart multiple stresses, one of the greatest of which is limited oxygen availability due to decreased gas diffusion. This limits aerobic respiration, which when coupled with reduced photosynthesis, promotes unchecked carbohydrate consumption to offset inefficient ATP production. Some of the earliest studies of plant low-oxygen responses were undertaken in corn and included observations of changes occurring at multiple levels of gene regulation, from gene transcription through mRNA translation. However, very little has been reported at the genome scale of the responses of corn to flooding. This talk will describe my dissertation research, which established extreme susceptibility, as well as dynamic changes that occured at multiple levels of gene regulation, in corn in response to low oxygen and flooding.