Dr. Jamie Voyles: How does it end? Shifts in the infectious disease chytridiomycosis and the fate of frogs 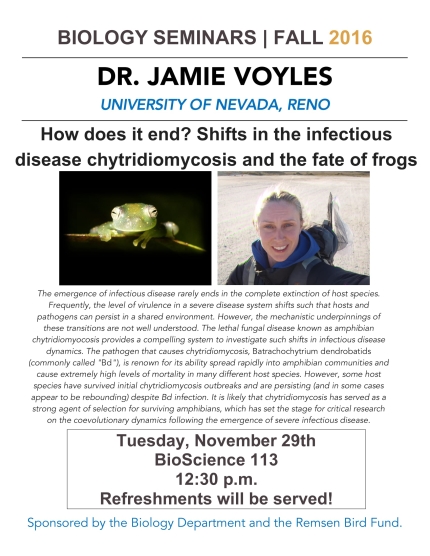 The emergence of infectious disease rarely ends in the complete extinction of host species. Frequently, the level of virulence in a severe disease system shifts such that hosts and pathogens can persist in a shared environment. However, the mechanistic underpinnings of these transitions are not well understood. The lethal fungal disease known as amphibian chytridiomyocosis provides a compelling system to investigate such shifts in infectious disease dynamics. The pathogen that causes chytridiomycosis, Batrachochytrium dendrobatids (commonly called "Bd"), is renown for its ability spread rapidly into amphibian communities and cause extremely high levels of mortality in many different host species. However, some host species have survived initial chytridiomycosis outbreaks and are persisting (and in some cases appear to be rebounding) despite Bd infection. It is likely that chytridiomycosis has served as a strong agent of selection for surviving amphibians, which has set the stage for critical research on the coevolutionary dynamics following the emergence of severe infectious disease.