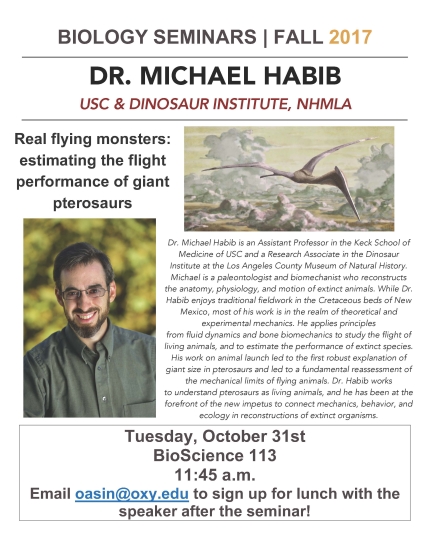 Dr. Michael Habib is an Assistant Professor in the Keck School of Medicine of USC and a Research Associate in the Dinosaur Institute at the Los Angeles County Museum of Natural History. Michael is a paleontologist and biomechanist who reconstructs the anatomy, physiology, and motion of extinct animals. While Dr. Habib enjoys traditional fieldwork in the Cretaceous beds of New Mexico, most of his work is in the realm of theoretical and experimental mechanics. He applies principles from fluid dynamics and bone biomechanics to study the flight of living animals, and to estimate the performance of extinct species. His work on animal launch led to the first robust explanation of giant size in pterosaurs and led to a fundamental reassessment of the mechanical limits of flying animals. Dr. Habib works to understand pterosaurs as living animals, and he has been at the forefront of the new impetus to connect mechanics, behavior, and ecology in reconstructions of extinct organisms.