Felipe Zapata - Towards understanding the evolution of plant diversity: Insights from Integrative Systematics 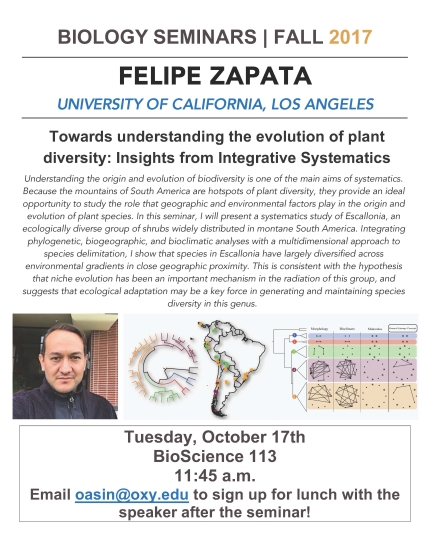 Towards understanding the evolution of plant diversity: Insights from Integrative Systematics

Understanding the origin and evolution of biodiversity is one of the main aims of systematics. Because the mountains of South America are hotspots of plant diversity, they provide an ideal opportunity to study the role that geographic and environmental factors play in the origin and evolution of plant species. In this seminar, I will present a systematics study of Escallonia, an ecologically diverse group of shrubs widely distributed in montane South America. Integrating phylogenetic, biogeographic, and bioclimatic analyses with a multidimensional approach to species delimitation, I show that species in Escallonia have largely diversified across environmental gradients in close geographic proximity. This is consistent with the hypothesis that niche evolution has been an important mechanism in the radiation of this group, and suggests that ecological adaptation may be a key force in generating and maintaining species diversity in this genus.

Email oasin@oxy.edu to sign up for lunch with the speaker after the seminar