Jeanne Robertson: The evolution of reproductive isolation along the speciation continuum. Lessons from red-eyed treefrogs. 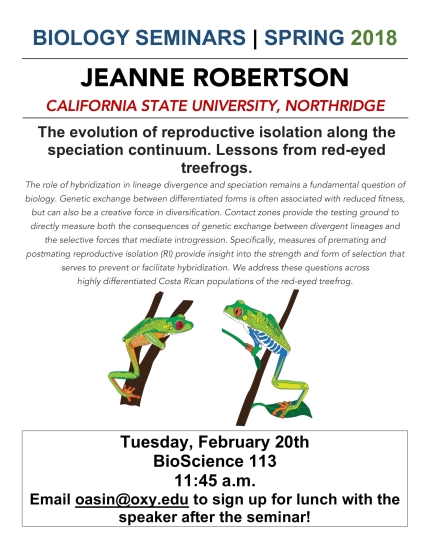 The Spring 2018 Biology Seminar Series continues with Jeanne Robertson’s talk, "The evolution of reproductive isolation along the speciation continuum. Lessons from red-eyed treefrogs."

The evolution of reproductive isolation along the speciation continuum. Lessons from red-eyed treefrogs.

The role of hybridization in lineage divergence and speciation remains a fundamental question of biology. Genetic exchange between differentiated forms is often associated with reduced fitness, but can also be a creative force in diversification. Contact zones provide the testing ground to directly measure both the consequences of genetic exchange between divergent lineages and the selective forces that mediate introgression. Specifically, measures of premating and postmating reproductive isolation (RI) provide insight into the strength and form of selection that serves to prevent or facilitate hybridization. We address these questions across highly differentiated Costa Rican populations of the red-eyed treefrog.

Email oasin@oxy.edu to sign up for lunch with the speaker after the seminar!