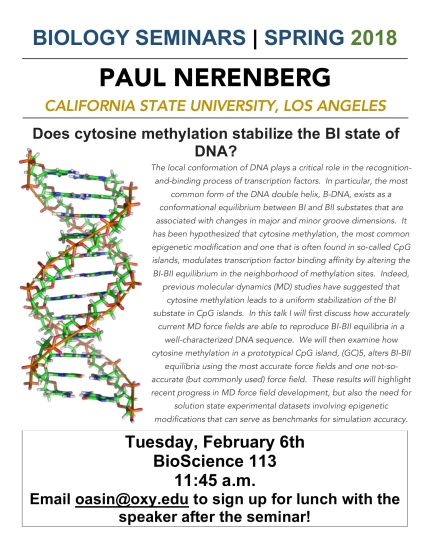 Does cytosine methylation stabilize the BI state of DNA?

The local conformation of DNA plays a critical role in the recognition-and-binding process of transcription factors.  In particular, the most common form of the DNA double helix, B-DNA, exists as a conformational equilibrium between BI and BII substates that are associated with changes in major and minor groove dimensions.  It has been hypothesized that cytosine methylation, the most common epigenetic modification and one that is often found in so-called CpG islands, modulates transcription factor binding affinity by altering the BI-BII equilibrium in the neighborhood of methylation sites.  Indeed, previous molecular dynamics (MD) studies have suggested that cytosine methylation leads to a uniform stabilization of the BI substate in CpG islands.  In this talk I will first discuss how accurately current MD force fields are able to reproduce BI-BII equilibria in a well-characterized DNA sequence.  We will then examine how cytosine methylation in a prototypical CpG island, (GC)5, alters BI-BII equilibria using the most accurate force fields and one not-so-accurate (but commonly used) force field.  These results will highlight recent progress in MD force field development, but also the need for solution state experimental datasets involving epigenetic modifications that can serve as benchmarks for simulation accuracy.

Email oasin@oxy.edu to sign up for lunch with the speaker after the seminar!