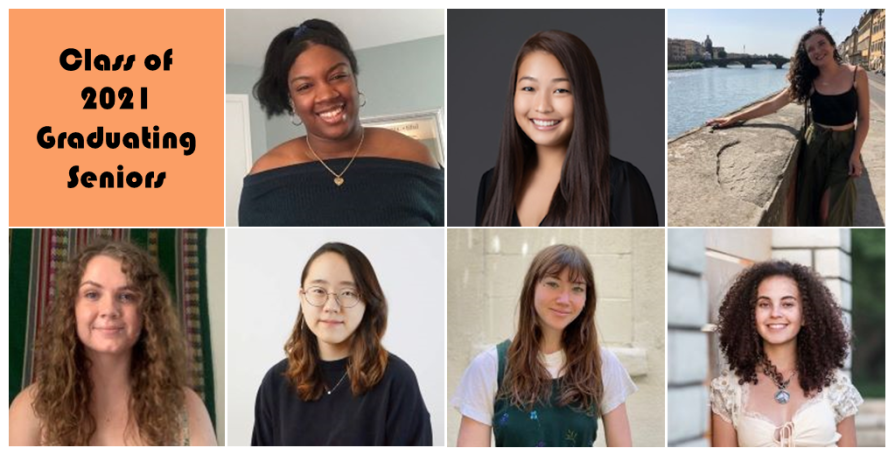 Meet a few of our graduating seniors and read their tips to students who are considering or are new to cognitive science at Oxy.

In addition to being a Cognitive Science major, Shelby is also double minoring in Linguistics and Education. She is really interested in languages and how people use and learn them. Her advice to anyone even just considering majoring in cog sci is, if you are unsure of anything, please don’t hesitate to reach out to one of the professors or even peers in the major. Cognitive science encompasses such a large scope of sub-topics that it is possible to find some connection with it and anything you may be interested in, even if it might not seem like it at first. For example, Shelby is also really into dance, but she never considered that it, along with other forms of art, could be used as a topic of interest under cog sci until she took COGS 265: Art, Creativity, and Cognition in her final semester. So please, don’t be afraid to ask questions! (And this really goes for any major.)

Jenna loves the outdoors and food! She participated in a field intensive study abroad program in Vietnam in her junior year, and enjoyed traveling across the country and trying many new foods that her host mother cooked! She also learned how to surf this year. Jenna has always been interested in consciousness, the mind and human behavior. Intro to Cogsci was one of her favorite courses because she was introduced to many new phenomena like qualia and animal/machine intelligence. She learned to approach all classes with an open mind, and to not discount the appeal of major req courses. Required classes like formal logic, ended up being some of her favorites, and she knows she wouldn't have taken them on her own choosing!

Bella grew up in sunny Southern California surrounded by animals including five cats and four tortoises. She loves the Cognitive Science department because the professors really care about you and support your learning. She highly recommends that students try a course in the department because you can explore your own interests and questions about the world, from human and animal consciousness to mental health and lifespan development.

Bella's comprehensive project was titled "The Impact of Social Isolation on Health and Well-Being."

Kristine is a cognitive science major who has also studied computer science. As of now, some of her related interests include Artificial Intelligence (AI) and UX/UI. Something she loves about cognitive science and part of the reason she chose it as her major is just discovering all the different perspectives in which the human mind can be studied. The scope of cognitive science might be daunting at first. However, the interdisciplinary nature of the field really allows one to explore a variety of avenues while still being grounded. So, she suggests being open to new opportunities and ideas! Even now, she’s still finding new interests and passions within and related to the field.

Julia started out as a Psychology major, but found herself taking more Cogsci classes and finding a home in the Cognitive Science department. She appreciates the multidisciplinary aspect of Cogsci and how it lends to developing different frameworks of interpreting and processing cognition. She would recommend Cogsci to anyone who has a passion for at least one subdiscipline of Cognitive Science, and an openness and intrigue for exploring the others!

Julia's comprehensive project was titled "Generational Trauma: How We Carry Our Families’ Histories."

Dylan rides horses competitively in show jumping and is thinking about equine therapy as a possible intersection for my personal and academic interests. Dylan is interested in working with people who have had a traumatic brain injury (TBI), and possibly in speech-language pathology. Our Cognitive Neuroscience class has also made her think about becoming a technician for the various neuroimaging techniques. She loves the cogsci major because it is so interdisciplinary and gives students a more well rounded approach to solving problems within the brain. She loves being able to combine her passion for language and interest in the brain in a single major and find other areas that complement those interests. Students considering cogsci should not be deterred by the many disciplines required for the major. She  suggests thinking of it as acquiring a broader skill set that complements the areas you're most interested in.

Dylan's comprehensive project was titled "Analyzing the Intersection of Language and Thought: How Words Define What You See."