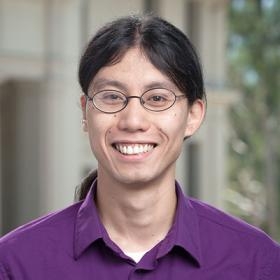 The Cognitive Science Department is so excited to congratulate Dr. Justin Li on earning tenure at Occidental College. Hired in 2015, Dr. Li made an immediate impact on the Cognitive Science department and students, expanding our offerings on computation and augmenting the computer science minor. By the end of his second year, he had successfully spearheaded the establishment of a new computer science major that has grown to nearly 90 majors and seven full-time instructors.

Throughout his time at Oxy, Dr. Li’s work has been marked by innovative, interdisciplinary, inclusive community-building within and beyond the boundaries of his classroom. As a teacher, he is reflective and thoughtful, bridging traditional computer science with cognitive science. His courses are noted for their rigor and challenge, with students consistently praising him for teaching “crazy difficult” content in a way that is accessible and interesting. Importantly, students appreciate that Dr. Li also goes above and beyond to provide them with support in mastering their coursework, describing him as exceedingly available, approachable, and encouraging. He is as generous a researcher as he is an instructor, meticulously including students in his many projects. This mentorship has resulted in several co-authored publications with Oxy students.

As a colleague, he has distinguished himself as an invaluable partner, demonstrating his deep-felt dedication to the mission of the College through his service to his departments; his work on numerous impactful committees and projects; and in the many hours he has volunteered for activities on campus.

We are thrilled to acknowledge Dr. Justin Li’s many accomplishments and contributions to the College by announcing his tenure and promotion to associate professor, effective in the 2021 – 2022 academic year.

Students share these thoughts about the lasting impact of Dr. Li's excellence as a teacher, advisor, and mentor:

“Professor Li has time and again gone above and beyond for students at Oxy. He's been an advisor for the Oxy Open Source Club, taught sessions for Oxy Open Source workshops, conducted research with students, and much more. Professor Li was the first faculty member I interacted with at Oxy as he was assigned to be my advisor for cognitive science during orientation week. Over the course of my four years at Oxy, Professor Li became someone I relied on, sought advice from, solved problems with, and someone I laughed with. His methodical teaching style and well-organized courses worked effectively with my learning style. I took a handful of classes with him and I found them to be fun, thought-provoking, and a safe place to ask questions and learn. There were numerous times that I reached out to him for help with coursework, career preparation, and general advice. He helped me understand specific data structures I struggled with and review technical interview questions I had been asked while job-searching. As one of my primary academic mentors, I attribute a large part of my interest in computer science to him as well as my current role as a software engineer.”

“Every professor at Occidental offers office hours, but Justin goes out of his way to extend hours if students need more help, and will further explain concepts, using different visualizations or analogies until his students understand. He’s very reluctant to “just give you the answer,” and will instead provide you with different frameworks of thinking, ask you to try again, and then give more tips. One particular example was when I was in Data Structures [COMP 229], and I was really having trouble explaining why merge sort has a runtime of O(n log(n)). Justin had me draw a picture representing the way the sort worked on the board, asking me questions along the way, making me justify my drawing. Then he asked me to think about the sorting using my diagram, talking through its steps. He spent about 30 minutes talking with me, until I had really mastered the concept. He is very committed to us learning the concept and the reasoning behind facts, so that when we are asked about them, we aren’t regurgitating material, but understand why it was true.

“He is an incredible instructor equipped with knowledge and wisdom far beyond his years and he is dedicated to his students, completely invested in their growth and development as scholars. Justin has made a truly profound impact on my life, and I have no doubt that he will continue to do so if he were part of the tenured faculty.”