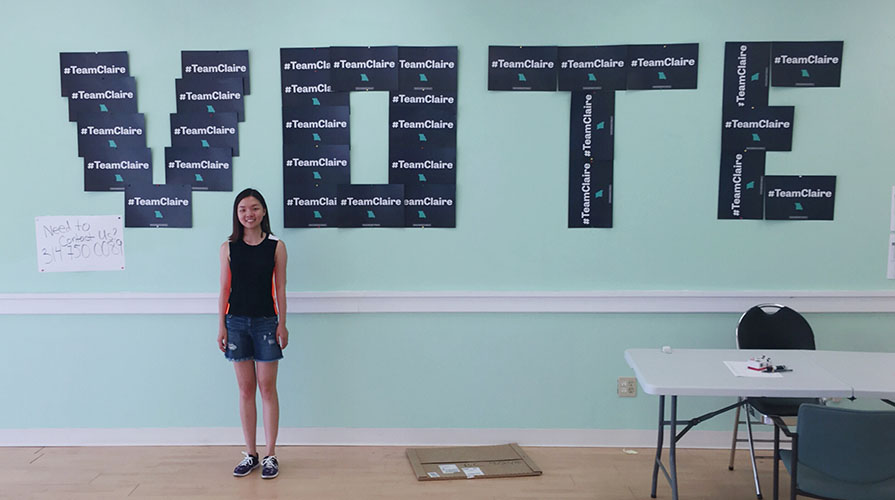 During the summer, before students travel to their campaign site, the faculty will assign students several books and articles to help them prepare for their Campaign Semester experience in the fall.

In addition, during the summer and through the fall election period, students should stay informed about upcoming political campaigns through a variety of news outlets. Once they have selected a campaign to work on, students should learn about the demographics of and problems facing the state or district, the key themes of the campaigns, the issues, and the candidates. In particular, here are some topics to focus on:

How many registered voters are there in your state? When is the deadline to register to vote before the November election?  What are the campaigns and parties doing to register more voters? Are they targeting certain demographic groups, or certain geographic areas of the state, to increase registration?  What was the overall voter turnout in your state in the last presidential and Senate election? Did voter registration and turnout increase, decrease or remain the system in the primaries compared with four and eight years earlier? Does your campaign expect voter turnout to increase or decline in November?  Why? Is your state considered a "blue," "red," or "purple" state? Since 2000, have the majority of voters in the state or district voted for the Democratic and Republican candidate for president and for the two Senate seats? What percentage of registered voters are registered as Democrats, Republicans, other parties, or independents?  What are the party affiliations of your state's Congressional delegation,  its two Senators, its Governor, and its state legislature?  What are the key interest groups in the state that are supporting candidates, registering voters, encouraging members and others to vote in November?  These could include farmers groups, business groups, labor unions, faith-based groups, groups that support or oppose gun owners' rights, pro- and anti-choice (reproductive  rights) groups, civil rights and community groups, environmental  groups, veterans groups, and others. Which groups are supporting your candidate and how are they doing so?

The Campaigns and the Candidates

Students should learn about the background and biography of the candidates they are working for and as well as of his/her opponent. If your candidate is an incumbent, what is her/his voting record on important issues? Is your candidate considered a liberal, moderate, or conservative?  What are the key issues in the campaign?  Are they national issues or local issues? Are they about foreign policy, the economy, social problems, or something else? What do the polls indicate voters are concerned about? What are your candidate's and his/her opponent's views on the key issues? How much money has your candidate's and opponent's campaign raised so far? Who are the major contributors in terms of groups, industries, interests? How much are they spending on TV and radio ads, direct mail, and other things? How many local offices does your campaign have in the state or congressional district? Where are they? How is your campaign recruiting and training volunteers? How is it using the internet? What is your campaign doing to reach the voters? How is it using such methods as door-to-door canvassing, the internet, direct mail, TV and radio ads, public events and rallies? In your campaign targeting certain groups - young people, union members, church-goers, evangelicals, Black or Latino voters, women, seniors, etc.? How? What are the key themes/messages of your candidate's and his/her opponent's TV and radio ads? Are there other tight races in your state­ for Governor or Congress or local office- that might help increase voter interest and turnout?

To stay abreast of the Presidential, Senate, House, and Gubernatorial campaigns in each state, as well as the general political environment, there are many sources of information. The most important are the major newspapers in each state. Students should identify the major daily papers in their state and read them regularly. Most will have free websites. The major national newspapers­ New York Times, Washington Post, Los Angeles Times, Wall Street Journal - will have regular articles and analyses about the national and state campaigns. The weekly newsmagazines - Time, Newsweek, U.S. News, and the British weekly, The Economist-- provide regular coverage of American politics and elections.

There are many sources of information about the demographics and political background of states. The U.S. Census, which has demographic profiles of each state. (Look under American FactFinder on the U.S. Census website).

Project Vote Smart has information on voting records, rankings by interest groups, campaign contributions, and other facts about each Congressperson.

The League of Women Voters in each state and city may have a website with information about the state and about the current candidates and their campaigns.

The Center for Responsive Politics is the best source of information on campaign contributions to candidates for President and Congress.

The National Journal and CNN are good sources of information about political trends, campaigns, polling information, and other information.

There are dozens of websites and blogs about American politics, and the politics in particular states, from many perspectives. Here are a few:

Finally, the U.S. has a wide variety of publications (and now websites) that are often called "opinion" magazines, that look at politics from a particular ideological perspective. It is useful to read publications from different viewpoints, which helps sharpen one's  analysis and understanding.  Here are some of the best "opinion" publications, each of which is available on­ line:

There are a number of good websites the monitor media coverage of campaigns. Some of the best include: