Like higher education, film shoots are a labor-intensive enterprise that present unique health and safety challenges during a pandemic.

The casual viewer of a shoot might see participants without masks or some other situation that on first glance suggests standard safety regulations are not being followed. But there is a tremendous amount of energy and activity happening on all sides of the camera to ensure a safe working environment. It’s a situation where “what you see” does not necessarily tell the full story.

Like most other industries (including higher education), the film industry must adhere to safety mandates issued by the L.A. County Department of Public Health. Beyond these, the various Hollywood unions have authored extensive requirements for every aspect of production. Every film-related activity—from location scouting and catering, to hairstyling and stunts—has a defined set of protocols that must be followed. To learn more, check out SAG-AFTRA or IATSE. Almost all projects filmed at Oxy are union productions. Each production team must also comply with Oxy's own health and safety requirements.

Some production teams (such as commercials or music videos) come together for a short time, then move on to the next job. Others (such as a TV series) might work together closely for years. So it makes sense that operations vary. But there are many common practices / industry standards for every production.

In order to obtain a film permit in Los Angeles, productions must have a COVID-19 Compliance Officer (C19CO). This person is responsible for developing and implementing a safety plan and procedures, and overseeing all activities (on and off set) to ensure they conform to safety requirements. A small TV commercial production might have just a few people on their COVID Compliance team, while a larger, ongoing TV show might have a team of dozens of people( the Apple TV production that recently filmed at Oxy had around 40 persons on their COVID compliance team.) On set, they are readily identifiable on set by their red or orange vests.

Safety is not limited to the set: When the Apple TV production scouted at Oxy a week before the actual shoot, they had several COVID compliance team members present. They also brought their own restrooms and handwashing stations, which were set up in the Bell Field parking lot. Because they were traveling to several other locations that day, they also had to set up a catering area for lunch (it’s not possible to just “stop off and pick up food”). The studio brought in tables, chairs, and a dumpster and set those up in the Bell Field tents in the morning before the scout. Production staff returned after the scout and picked up all the equipment.

Crews are organized in work groups based on what they do: art, lighting, sound, construction, and so on. Individuals must stay within their work group and maintain an appropriate distance from other groups. If an individual tested positive for COVID, all members of the work group would be removed from the project to quarantine; the production would bring in a new group to replace them. There is tremendous professional and personal motivation to adhere to safety measures, on and off the job.

Work groups are further categorized by their proximity to “A Pod.” The “A Pod” is a small subset of crew who have close contact with actors, who often work without a mask. "A Pod" members are tested daily and maintain separate areas for all activity, including catering, restrooms, and handwashing. They also typically must utilize additional PPE, such as face shields.

Do actors have to wear masks? 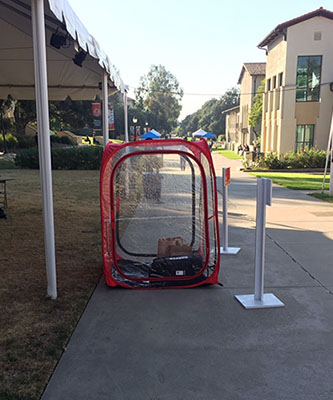 Typically an actor is only allowed to remove their mask when on camera. Once the film stops rolling, the mask goes back on. In a scene with two actors talking, if the camera is pointed at one actor, the rules require that  the other is wearing a mask. The image here shows a safety tent used during filming of “The Rookie” (shot at Oxy in October 2020). Before a scene or between takes, the actor was zipped into the single-sized, individually climate-controlled tent. With sitting-room only space, the tents protect health (and makeup) while the actor waits for their scene.

Everyone working with a production is tested three or five times per week (on and off set), depending on their proximity to actors who work without a mask, and other factors. A makeup artist who has direct contact with an unmasked actor would receive a rapid test immediately upon arrival each day. They can start work only upon return of negative test results. Other persons (who might not even be on set) are included in testing regimes, since they may work with those individuals off set or at other locations.

What about all those extras?

Students often ask how they can be hired as extras in productions working at Oxy. But with current safety measures, that is almost impossible. Instead of hiring extras for a single day’s work, productions are hiring a “fixed” group of persons to fill background needs for all episodes. By bringing extras onto their regular payroll, productions can include extras in their testing and work protocols, and minimize the risk of new personnel on set. You can read more about the implications in this recent LA Times article.