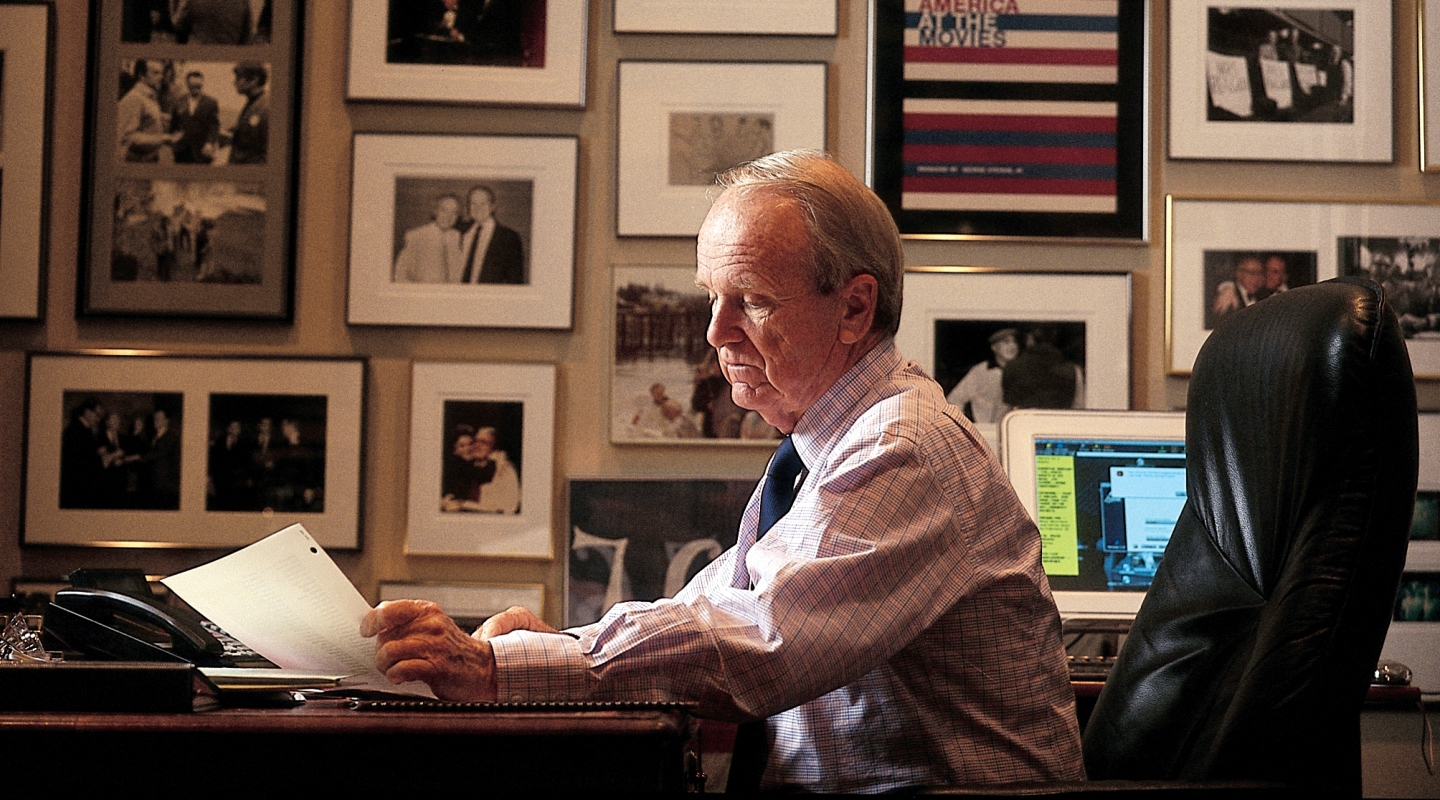 From Winter 2003: For 25 years, George Stevens Jr. ’53 has saluted living legends in performing arts through the Kennedy Center Honors. But it’s only one career peak for a producer whose work has raised the stature of American film as a serious medium, examined some of the great social movements of the 20th century, and fostered a renewed respect for his father’s legacy

If you were to make a short film about the life of George Stevens Jr. ’53, there would be no shortage of material from which to choose. The walls of Stevens’ office at the Kennedy Center for the Performing Arts in Washington, D.C., are lined with an amazing collection of photos spanning a half-century’s work—including stints with the United States Information Agency, American Film Insti­tute, and the nation’s millennium celebration; a fistful of thought-provoking films that he has written, produced, or directed; and the centerpiece of his career, 25 years as founding producer of the Kennedy Center Honors.

When it comes to capturing the essence of the great performers of our time, Stevens has few peers. He has a flair for spectacle and one of the toniest Rolodexes in the business—a combination that has engendered some of the most memorable, and emotional, moments of the last 25 years on the Kennedy Center Opera House stage. “They are hard to describe in a sentence,” Stevens says, but several show-stoppers spring to mind: Yo-Yo Ma and 100 cellists on stage performing for the world’s greatest living cellist, Mstislav Rostropovich; the veterans of four wars recalling where they had seen the United Service Organizations’ premier goodwill ambassador, Bob Hope; and the children from the Alabama School for the Blind singing for the school’s most famous graduate, Ray Charles.

“I think an awful lot of my work relates to our country,” Stevens says. “And my effort has been to have everything that I do be of a certain level of taste and quality.”

A former alumni trustee (1978-83) of the College and honorary degree recipient in 1996, Stevens grew up in North Hollywood and majored in speech and English at Oxy. “I very much enjoyed being the sports editor of The Occidental and somehow fancied myself as a sports writer,” Stevens says, “but the gravitational pull of motion pictures was pretty strong.” Under the wing of “guiding spirit” Omar Paxson ’48, he also worked on theater projects alongside Ming Cho Lee ’53, who became one of the most distinguished set designers of his generation. “He did sets, and we all acted and did whatever was called for,” says Stevens, who portrayed Sir William Blunt in a 1952 production of King Henry IV Part I: “If there were any great reviews of my performance, I haven’t seen them lately.”

After graduation, Stevens enlisted in the Air Force, where he directed training films as a motion picture officer. Following his discharge, he worked with his father, Academy Award-winning director George Stevens, on films including Giant (1955), The Diary of Anne Frank (1959), and The Greatest Story Ever Told (1965). “One of the most important things I learned from Dad was respect for the audience,” George Jr. says. “He always had great regard for the intelligence of the audience, and I have made that a practice as well.”

In 1962, at the invitation of Edward R. Murrow, Stevens took charge of the motion picture and TV activities of the United States Information Agency, which was charged with telling America’s story abroad through the production of documentaries that were distributed to 130 countries worldwide. (The agency, created in 1953, folded in 1999.) During Stevens’ five-year tenure, USIA films received four Academy Award nominations, winning a Best Documentary Short Oscar in 1964 for Nine From Little Rock. “It introduced me to the world of government, of politics, of international affairs, and my life was never quite the same after that,” Stevens says. “Instead of having a career that was entirely based on motion pictures, I had more of a national career.”

Stevens’ government experience made him an ideal candidate to be the founding director of the American Film Institute in 1967. An outgrowth of the National Endow­ment for the Arts (which was established by Con­gress two years earlier), “The creation of the AFI coincided with the awakening in the United States that motion pictures were an art,” Stevens says. The Institute was focused not only on preserving film classics, he adds, but also providing training and opportunities for new filmmakers.

When the AFI Board of Trustees established the AFI Life Achievement Award in 1973, “We wanted to create something that in our phrase, ‘stood the test of time’—not who was popular this year but whose work had lasted and maintained its quality through the years,” says Stevens. He wrote and produced 25 awards shows with many of “the greatest filmmakers and actors in the history of film”—including John Ford, James Cagney, Orson Welles, William Wyler, and Bette Davis, to name just the first five honorees.

The AFI’s East Coast offices are housed in the Kennedy Center for the Performing Arts, which was chaired by Broadway producer Roger Stevens (no relation) from 1961 until his retirement in 1988. In 1978, George Stevens went to Roger Stevens with the idea to honor individual achievement in dance, music, theater, opera, film, and television. His guiding influence was the late John F. Kennedy, who once said, “The life of the arts, far from being an interruption, a distraction, in the life of a nation, is very close to the center of a nation’s purpose—and is a test of the quality of a nation’s civilization.” For Stevens, “The Kennedy Center Honors was really a manifestation of a kind of idealism that was instilled in me by President Kennedy and his spacious view of our country and its future.”

The Kennedy Center Honors found a home at CBS, which had been airing the AFI tributes. In an era of cheap reality fodder and a cable channel for every interest, the Honors remain an oasis of quality network programming—“as good a definition of culture as one can find,” in the words of a Washington Post editorial. “That’s really at the heart of what it’s about,” Stevens says, “to have a place on commercial television where people can have a look into the finest of the performing arts.”

After an artists committee representing the various disciplines makes its selections, the honorees are announced in July. Then Stevens and his crew begin the research and production of each biographical film that will appear on the CBS broadcast. “Knowledge and experience are a great tool when it comes to doing something like this,” says Stevens, just off a conference call to discuss performers for this year’s Paul Simon tribute. “The challenge is to keep it fresh and not let all that knowledge and experience become stale.”

“What keeps it fresh for me is that each year it’s five new honorees and five new lives,” says Stevens, who plans to continue producing the Honors with no end in sight. “I like the variety of challenges that are open to me.” In 1985, 10 years after his father’s death, Stevens completed the acclaimed documentary George Stevens: A Filmmaker’s Journey, which wowed critics and audiences with previously unseen color footage of D-Day and its aftermath. “It is among the most satisfying things I’ve ever done,” Stevens says. “It is such a rare opportunity for a son to be able to make a film about his father.”

In addition to a second documentary, George Stevens: D-Day to Berlin, produced for television in 1994, Stevens co-wrote and produced The Murder of Mary Phagan(1988), a miniseries depicting the true story of a Jewish factory worker in Georgia who was lynched in 1913 for the murder of a teenage girl. Three years later, he wrote, produced, and directed Separate But Equal, dramatizing the Brown v. Board of Educationsegregation battle of 1954 and starring Sidney Poitier as Thurgood Marshall. Both won Emmys. In 1997-98, Stevens spent six months on location in Australia as executive producer on The Thin Red Line, the Oscar-nominated film directed by the reclusive Terence Malick (Days of Heaven), a friend since the latter’s days as an AFI film student.

When the nation entered the 21st century, Stevens was there to commemorate the occasion. For “America’s Millennium Gala,” the light and music extravaganza staged on the Mall on Dec. 31, 1999, first lady Hillary Rodham Clinton turned to Stevens and longtime friend Quincy Jones to produce the event. They hired a cast of hundreds for the spectacular, which took place outside the Lincoln Memorial, and brought aboard Steven Spielberg to produce an 18-minute film for the occasion, but other factors were beyond their control. A crowd of some 500,000—five times the expected number—endured not only 38-degree weather but the terrorist threats that cast a shadow over the celebration. With all the security measures in place, “I kept saying this was going to be the safest place in America,” Stevens says, and the event went off without incident: “We wired the Washington Monument with the most spectacular ascending stream of fireworks ever. It was a joyous and ennobling night.”

After a nearly 12-year absence behind the camera, Stevens is at work on the script for An American Requiem, which he hopes to direct in 2003. Based on the 1996 National Book Award winner by James Carroll and set in 1960s-era Washington, the film explores the relationship between Joe Carroll, a three-star general at the Pentagon during the Vietnam War, and his son Jim, a young priest who spoke out against the war. The book’s sub­title details the central conflict: God, My Father, and the War That Came Between Us.

In addition, Stevens is writing a book for Knopf tentatively titled Filmmakers of the Golden Age. “When we started the AFI School in Los Angeles in 1969, I had this idea of what we called a tutorial method, where we invited the great filmmakers to come and do seminars,” says Stevens. He’s culling through transcripts of those sessions—“about 35 of the greatest directors who ever lived”—for the book, which will include Ingmar Bergman, Frank Capra, Federico Fellini, John Huston, Billy Wilder, and George Stevens. “It will be a nice little ribbon to tie around a period of my life,” says the younger Stevens.

If you were to make a short film about George Stevens Jr., you would be sure to include his family (“I have three grown children who are a source of pleasure and pride”) and you might include a shot of him on the golf course (he’s an annual participant in the AT&T National Pebble Beach National Pro-Am, the tournament originally named for Bing Crosby). And if you were looking for a closing thought that ties his career together, you’d be hard-pressed to do better than this:

“I am fortunate to have a profession that if they didn’t pay me anything I’d still want to do it,” Stevens says. “It can be difficult and demanding, and even scary sometimes, but the pleasures associated with it are huge.”