Phoenix businessman and author Fred DuVal '76 established the National Institute for Civil Discourse following the near-fatal shooting of Rep. Gabrielle Giffords in 2011. Is the governor's office in his future?

When Fred DuVal '76 got the news on Jan. 8, 2011, his reaction was immediate: "I felt complete, utter trauma and numbness." Arizona Rep. Gabrielle Giffords' former campaign manager was racked by sobs as the woman whose ­congressional bid he successfully orchestrated four years earlier fought for her life after being shot in the head point blank during a "Congress on the Corner" constituent meeting in a Tucson parking lot. 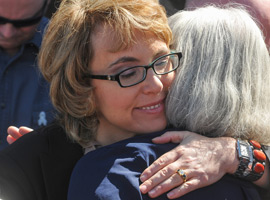 It was four days later that DuVal and 30 million other Americans listened to President Barack Obama '83 call for healing and reflection as a polarized country argued about the role of firearms in the national character. In his address at the University of Arizona, Obama invoked the name of a 9-year-old schoolgirl who was among six people killed in the attack.

"He uttered that extraordinary line, that we should create a democracy as good as Christina-Taylor Green would have imagined it," says DuVal, a longtime public policy player who likened the psychic wound on the country to that experienced when President Kennedy was assassinated 47 years earlier. "This was a Dallas moment for Tucson."

For DuVal, it was an important chance to seek common ground on guns and other fractious issues facing the country. The night of the shooting, DuVal wrote a draft for a nonpartisan organization he called the , which he proposed would be based at the U of A. "I called a meeting the next morning with the U of A provost and others and got the ball rolling," DuVal says. "There was immediate support."

DuVal has never been far from the action. He was deputy director of intergovernmental affairs in the Clinton administration, helping states implement welfare reform legislation known as the Personal Responsibility and Work Opportunity Reconciliation Act of 1996. Prior to that, he was deputy chief of protocol at the Department of State, where he managed visits by visiting heads of state. More recently, he sat on the Arizona Board of Regents, which oversees the state's three public universities.

Launched in February 2011, the institute promotes civic engage­ment through town halls, while also serving as "a counterweight to the dominant business and media model of our age, which attracts an audience by catering to existing fears and beliefs rather than challenging them." The group seeks to "change the political reward for more responsible, centrist speech."

The institute funds research projects aimed at investigating civility in the public domain, in addition to publicizing academic articles addressing freedom of speech and related topics. Visitors to the website are urged to contact elected officials—through links provided to the Senate and House of Representatives websites—to "tell your politician how you feel about their opinion, mannerisms, rhetoric, vitriolic speech, or even incorrect data shared through media channels."

Classmate and friend Bob Robb '76, a political columnist for the Arizona Republic in Phoenix, says he views most calls for increased civility "as primarily coming from people on the left who want to shut up people on the right." He doesn't list DuVal among that group. "Fred's motivations for the institute aren't in question, and his desire for the outcome—having a true civil discourse and not disadvantaging or shutting up one part of the political spectrum—are genuine." 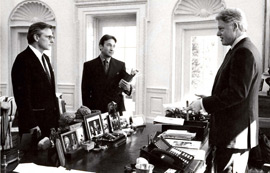 DuVal—a Democrat who in February created an exploratory committee to consider a run for governor next year—says he founded the institute out of concern that today's political environment has become so toxic that some will see Second Amendment protections to bear arms as a logical extension of free speech protections guaranteed under the First Amendment. He wants to find compromise and common ground on such issues, not finger-wagging.

Giffords joined the institute board last May, and DuVal has visited periodically with her since the shootings. "She has an irrepressible spirit and an outward affection," he says. "She's fully engaged and is observant of the people and conversation taking place around her. She's limited only by her ability to express herself. Taking on responsible gun ownership and gun violence is not an assignment she probably would have envisioned. But it's one that history has given her, and she's taken it."

Those who know DuVal aren't surprised by his commitment to creating a more congenial political climate. After graduating from Arizona State University law school, he was a senior aide to former Arizona Gov. Bruce Babbitt, a moderate Democrat, from 1980 to 1985. DuVal also watched two of the state's brightest political stars work across the aisle: conservative Sen. Barry Goldwater and liberal Rep. Mo Udall.

"He's done very well maneuvering through the intricacies of politics at the state, local and national levels," Robb says. "He understands political reality, so I don't think he has pie-in-the-sky aspirations for what the institute can do. He has a genuine belief that it can move things in the right direction and, at a minimum, provide an oasis where people can check their invectives at the door."

Further, Robb and others testify, DuVal has conducted his career with unstinting kindness. Former Arizona Attorney General Grant Woods '76, now a Phoenix litigator, didn't know what to make of DuVal when he met him at the Boys State leadership and citizenship program while both were high school students in Arizona. "My impression was that this guy could not be for real," Woods recalls. "I really got to know him our freshman year at Oxy, and I discovered very quickly that he really was that nice a guy. He was completely sincere, and there wasn't a fake bone in his body."

Woods, a Republican, is crossing party lines to support his friend's gubernatorial bid. But it's not out of any longstanding fealty: "Fred has the skills and the temperament to really be the perfect person for Arizona going forward, and because of that he works very well with Republicans," he says. "Whether he wins or loses, it's an easy call for me."

DuVal credits Occidental with teaching him some of his earliest lessons in civil discourse. "There's a benefit of classes of 12 to 14 students sitting around a single table that lends itself to deep discussion and debate." He recalls sitting in the Quad with Woods and Robb discussing the Nixon presidency (the trio worked on the student newspaper), and he thanks the College for the "endless" papers he had to write as part of his learning.

In 2012 DuVal published Irons in the Fire: A Collection of Opinions and Reflections About the Grand Canyon State. Drawing on columns he has penned over the last 40 years, he addresses everything from education to economic development. DuVal also co-wrote Calling Arizona Home (2005) with Phoenix author Lisa Schnebly Heidinger. The book highlights Arizonans from various walks of life discussing their communities.

"Fred is the single most charismatic person I have ever known," says Schnebly Heidinger, who was a cub reporter when she met DuVal while he worked for Babbitt. "When he talks to people and listens to ­people, what happens is they see themselves differently. We would go to Holbrook or Sedona or Nogales, and people became excited about their community. They began to have ideas about what they could achieve." 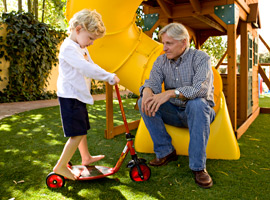 DuVal enrolled at Oxy after visiting campus the weekend in 1972 that President Nixon mined Haiphong Harbor in Vietnam, seen as an escalation of the war among those in liberal and moderate circles. In a single weekend he visited Stanford, where he witnessed bloodshed and student arrests in response to Nixon's act, and Claremont McKenna College ("it was sound asleep"). "Then I went to Oxy, and all of the students had armbands and were expressing their displeasure with Nixon," DuVal recalls. "There was a fiery speech at lunch, and I thought, 'This is my style of moderation.'"

But how does one encourage moderate, bipartisan discourse in today's world? With a small budget and limited staffing, DuVal says the institute's effectiveness comes with knowing its strengths. With former presidents Clinton and George H.W. Bush serving as honorary chairs, the institute, through TV appearances, will call out "bad actors" during campaign seasons.

"The campaign environment is most important, as far as we're concerned," DuVal says, noting that campaigns have particularly powerful sway in shaping the national ethos. "The institute is trying to be as national as possible, and this is a way to distinguish itself in the end."

Change won't happen until the various players own up to their own culpability in today's political morass, he adds. "It's easy to hold the other team responsible, and I mean that not in a bilateral way, but a trilateral way. It's easy for the political parties to blame each other, and for both to blame the media. And the media blame the politicians. It's a triangle. We'll only have change when each team holds their own team accountable."

Through American history, there have been several hallmark examples of bipartisanship—the Social Security Act of 1935 and the Voting Rights Act of 1965, among them. But, more recently, legislation such as Presi­dent George W. Bush's tax cuts and Obama's Affordable Care Act passed on straight party votes that highlight the challenges at hand. Moderation has proven difficult to come by in an age of winning at all costs.

"Creating policy sustainability requires some degree of common ground," DuVal says. "We are at this huge disadvantage because we take steps in one direction and then reverse the course constantly. There are conversations taking place across the aisle that did not occur two years ago regarding guns and gun violence. The jury's out, but at least people are gathering in the same room."

After the Giffords shooting, "I was very optimistic in the focused energy of the moment. But then I got a little depressed, inevitably," DuVal says. That's because the election cycle took over the headlines, along with sniping about immigration reform and the long-term prognosis for the federal budget and debt.

One area in which he thinks Americans can come together is reducing the country's dependence on foreign oil. DuVal helped develop the Pickens Plan (named for its primary backer, entrepreneur T. Boone Pickens), which would increase wind and natural gas as energy sources. "It's not as emotional as immigration and some of the other issues, and it does threaten some existing stakeholders," he says. "But it's wrapped in enough broad common ground—right and left—agreeing that borrowing money from China to pay for oil is a ticket to our demise."

However that conversation progresses, DuVal hopes Americans can exercise one sense in particular: listening. "You can't capture the potential for common ground if you don't listen," he says, "and do it with an open mind and open heart."