Building on the College’s proximity to three distinctive ecosystems, its commitment  to cutting-edge genomics research, and its emphasis on experiential learning, Oxy embraces an interdisciplinary approach to environmental science

By Jim Tranquada I Photos by Marc Campos

Trustee Dave Anderson ’63 went into the newly emerging field of environmental law almost by accident, thanks to a stint in the Coast Guard Reserve that found him helping to develop an early oil spill response plan. But as his pioneering career grew, he was reminded how his own education hadn’t made the connections he often found in his work between such seemingly disparate fields as political science, biology, and economics.

“Oxy was no different than the Ivy League or any other college or university in the early ’60s. Everyone taught their subject in their own individual silo. It was the same in law school,” says Anderson, a member of the national Land Trust Alliance board, former general counsel of the California Air Resources Board, and past board member of the California Nature Conservancy. “We’ve come a long way since then—I’m pleased to see how environmental science and law have become part of our thinking as a global community.” 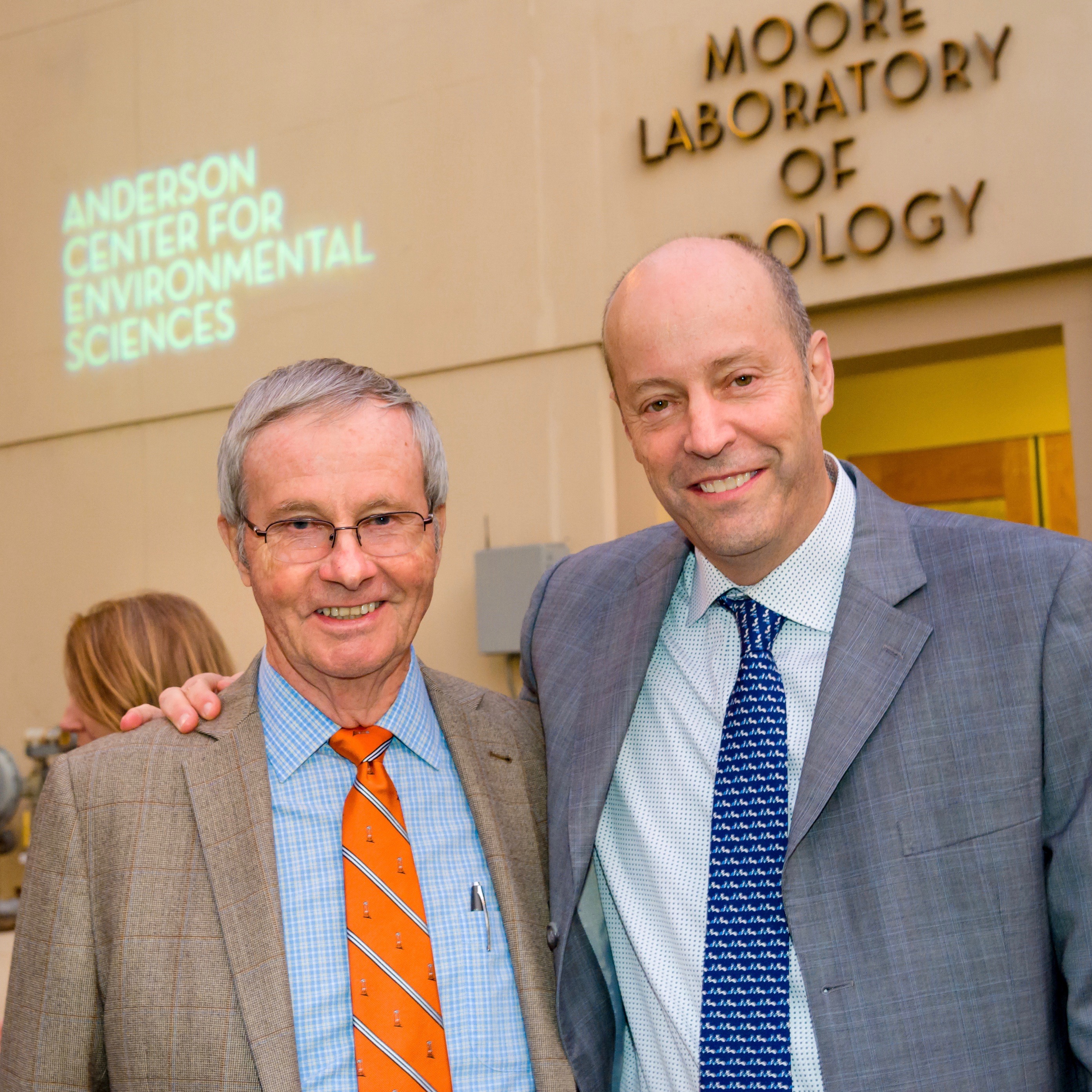 Fueled by a desire to encourage that kind of interdisciplinary approach, Anderson has provided the lead gift for what will be known as the Anderson Center for Environmental Sciences at Occidental. (Other major supporters include the Ahmanson Foundation, Rose Hills Foundation, National Science Foundation, and the W.M. Keck Foundation.) When the $12.7-million project is completed in early 2020, the 14,000 square feet of renovated space in the Robert T. Moore Laboratory of Zoology and some adjacent portions of the Bioscience building will provide enhanced teaching, research, and exhibition space, including the cutting-edge Fletcher Jones Foundation Genomics Center.

“The Anderson Center will provide a focal point for an exciting interdisciplinary program that extends across campus and takes full advantage of Oxy’s unique location at the nexus of three distinctive ecosystems: the Pacific Ocean, the San Gabriel Mountains, and the Mojave Desert,” says President Jonathan Veitch.

“When you put together our location, strong biology and geology departments, two outstanding natural science collections, and our emphasis on experiential learning, you have the foundation for the kind of marquee program envisioned in the College’s strategic plan,” he adds. “Today’s environmental challenges require complex interdisciplinary solutions that draw equally on the physical, biological, and informational sciences. Thanks to the generosity of Dave and others, we can link these fields in a compelling way.”

At the heart of the Anderson Center will be the 65,000 specimens in the Moore Collection, the world’s largest assemblage of Mexican birds. Together with the College’s Cosman Shell Collection, which has more than 117,000 specimens of gastropods and bivalves from around the world, Oxy will be in an enviable position to take advantage of scientific advances made after the collections were assembled. The field of genomics—the interdisciplinary study of the structure, function, evolution, mapping, and editing of DNA—has transformed natural history collections like these into an extraordinary source of potential new insights into biodiversity and environmental change.

Oxy’s new investment runs counter to an emerging national trend for natural history collections. “Just as the collections are growing more valuable [because of the rise of genomics], they are falling into decline. With many institutions struggling to cope with significant budget cuts, some collections are being neglected, damaged, or lost altogether,” Nature reported in 2015.

Yet the need has never been greater and student interest is rising, Oxy scientists say. “Because environmental science is increasingly relevant in terms of the ways humans are changing our environment, its importance has grown, and that has attracted students,” says John McCormack, associate professor of biology and Moore Lab curator.

In the most basic sense, environmental science is about solving problems, says Gretchen North, the John W. McMenamin Endowed Chair in Biology. “When I first started in this field, ecology was theory,” she remembers. “When you approached an issue, you would approach it from the perspective of how does this system work ideally? What hypotheses can you test that are borne out in this ideal system? But it’s not for purists anymore. It’s for people who want to roll up their sleeves and address a real problem.”

In lieu of a traditional major, environmental science students at Oxy develop a broad base in the field through a series of seven required courses in biology, geology, and economics, as well as completing a major in biology or geology. “We have a truly interdisciplinary program in which students become an expert in one field,” Rusmore says. “We have taken the tack of providing students with a strong foundation in a science, and coupling that with remarkable research opportunities.”

Clarasophia Gust ’19 of Minneapolis, one of 17 current students with a concentration in environmental science, noticed the difference while in Tanzania last semester studying wildlife conservation with students from other colleges. “A lot of them came from environmental programs that were more social science-oriented, rather than hard biological science,” says Gust, a biology major with a philosophy minor. “The director of the program had a background in anthropology.”

Whether it’s overseas or just a short drive from campus, research is central to environmental science at Oxy. Since 1966, the College’s Vantuna Research Group has been monitoring the marine environment of Southern and Baja Cali­fornia—producing both the longest continual time series studies of rocky reefs in the world and the largest spatial scale studies of reefs in the Southern California bight, now a go-to baseline for researchers and policymakers.

“Our location in Los Angeles is absolutely critical to what we do,” says North. “Marine biology has an incredible living laboratory to work with. Plants are active all year round. But we also have a really good tradition of fieldwork in geology and biology. Instead of working through other people’s data, we generate our own.”

When completed, the Anderson Center’s new Fletcher Jones Genomics Lab will allow biologists to expand on the innovative genetic research that they and their students already have underway. “This brings our research facilities up to speed, to better support the kind of research going on here,” says McCormack. “The new space will be more conducive to collaborative work for both avian and marine biology. It opens up a lot of possible new research directions for us.”

McCormack and his students already are exploring new means of increasing the yield of useful genetic material from museum specimens, testing bone samples instead of the conventional tissue from skin or toe pads. Museum specimen DNA is degraded—shredded into small pieces, he explains.  “But the new generation of sequencers are really good at sequencing lots and lots of pieces and pulling out the specific pieces you’re interested in, without contaminants.” 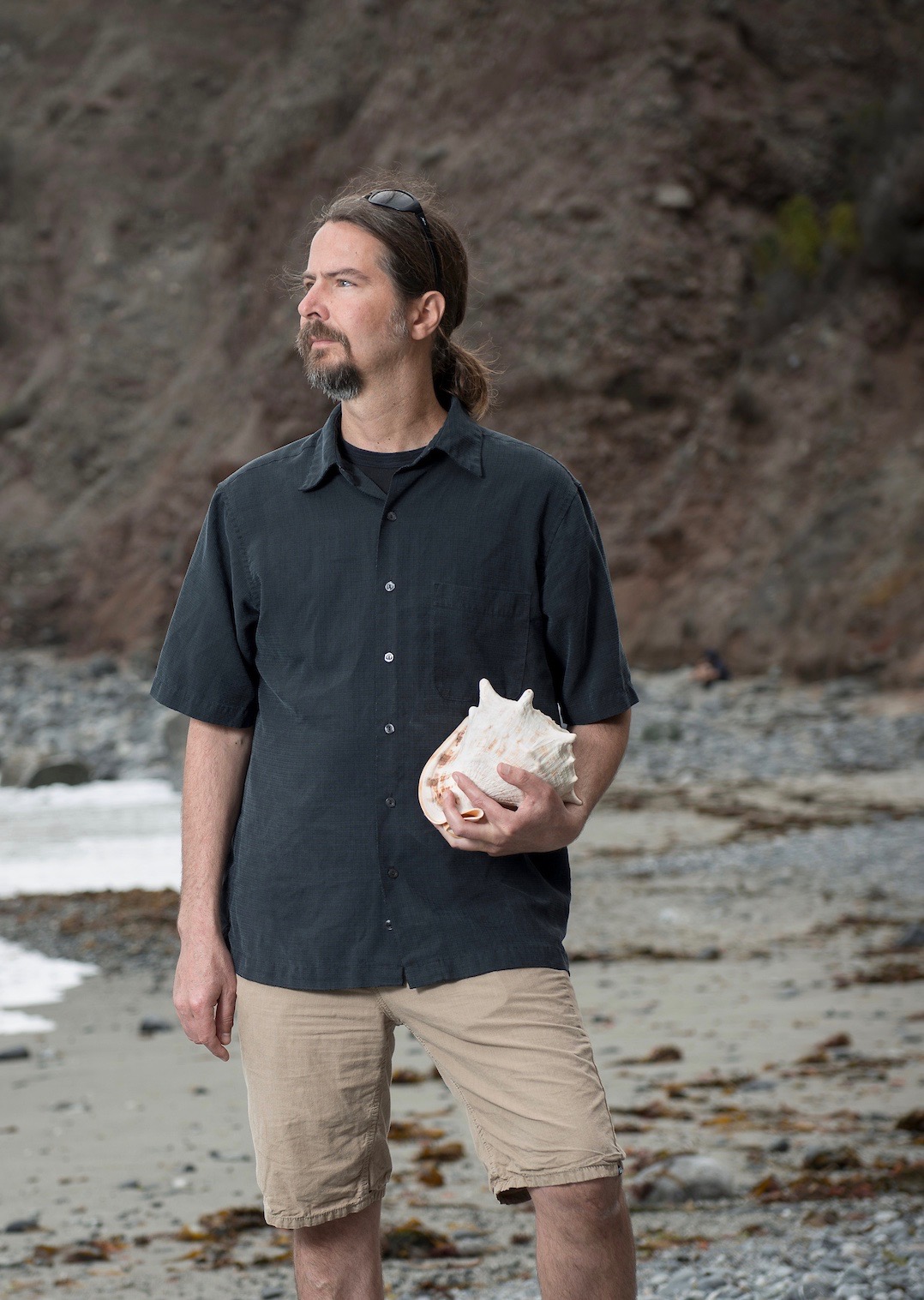 Associate professor of biology Joseph Schulz and his students also will be using the lab to process material from the Cosman Shell Collection. Many of the shells still have organic material attached—the periostra­cum or external “skin” and the operculum, the kind of trap door that many snails use to close the aperture of their shells. “We usually don’t see that material because most people clean their shells up. That’s one of the unusual things about this collection,” says Schulz, who curates the shells.

The potential impact of the genetic research of both birds and snails is far-reaching, whether the goal is identification of new species or monitoring changes in habitats and populations that potentially reflect the effects of climate change. Both the Moore and Cosman collections will eventually be digitized (including the possibility of 3-D scanning), which will make them available to researchers around the world. And students are involved in every aspect of the work. “We’re committed to have students directly participate as colleagues. They are co-authors and they go to meetings,” Schulz says. “I’m known in my field as the scientist who brings his undergraduate students to conferences. It’s what we do in Oxy bio.”

Bringing additional depth to the interdisciplinary program are faculty in other departments that one wouldn’t immediately connect with environmental science. Bevin Ashenmiller, associate professor of economics, spent the 2012-13 academic year working as senior economist for energy and the environment at the White House Council of Economic Advisers. She teaches an environmental economics course that is required of every environ­mental science student.

Students who want to explore policy implications of the science they are pursu­ing can take a variety of courses in urban and environmental policy (UEP). “We teach students about the complexity of environmental issues affecting urban areas, particularly Los Angeles,” says UEP assistant professor Bhavna Sha­masunder, who holds a doctorate in environmental science, policy, and management. “For example, our students learn the science, politics, and policies surrounding air pollution as it affects Los Angeles and Angelenos. They have opportunities to intern with community-based organizations that are working to improve environmental quality in their neighborhoods.” Oxy students also participate in ongoing research projects, from goods movement to oil extraction—“issues that have multi-agency regulatory oversight,” she adds.

The relationship between UEP, biology, and geology cuts both ways: North, Ashenmiller, and biology professor Beth Braker serve on the UEP advisory committee, and three geology courses are among the math and science courses recommended for UEP majors.

Over the last year, the program has even embraced the philosophy department. Gust spent part of last summer with associate professor Clair Morrissey at La Selva Biological Station and Reserve in the Costa Rican rain forest to explore the question of how scientific knowledge is related to valuing nature. “I’ve become fascinated with how we define the role of a scientist, especially right now when sharing scientific knowledge has become polarized,” Gust says.

New tenure-track faculty hires in biology and geology over the last three years have been made with an eye to what they can contribute to the interdisciplinary work underway. In biology, Amanda Zellmer combines her interest in amphibians with computational analyses of spatial ecological and evolutionary processes, while Amber Stubler is studying how human impacts are changing marine ecosystem function, with an emphasis on ocean acidification and rising temperatures. In geology, Darren Larsen is investigating sedimentary formations to develop a greater understanding of Earth’s climate shifts (“An Occidental Truth,” Fall 2017), while Christopher Oze is looking at the geochemical evolution of a variety of metals and gases and how they may contribute to larger processes including climate change.

Faculty are also discussing how to build on the success of California Environmental Semester, a team-taught first-year seminar. “I still regard it as one of the best curricular experiments of the last 10 years,” North says. “It wasn’t me trying to cover everything; it was me working with a geologist and an economist. From a curricular standpoint, I would like to see more of those kinds of initiatives.”

Building on what is already a distinctive program, the new Anderson Center “puts us on the map,” says McCormack. “We are planting a flag as a liberal arts college doing high-tech research. This will bring a lot of people in—not just students, but collaborators and researchers from other institutions.”

Dave Anderson has a confession to make: Outside of his political science major, he was not an “A” student at Oxy. “I barely made it through physics, and I almost blew up the chem lab in Fowler,” he recalls with a smile. Yet his favorite class in college—and in high school, too—was biology: “I was really struck by our relationship to the natural world.”

Up until now, “Too much of environmental decision-making has been political and not fact-based,” Anderson adds. “We want environmental science students to become very knowledgeable in such a way that enables them to move on to grad school or into the public and private sectors and focus on these important issues we face now.

“We want to create the next generation of leaders in the field,” he says—and the environment at Oxy will support that.

For additional reading about the Moore and Cosman collections, see “The Moore Identity” (Fall 2012) and “The Life Aquatic” (Summer 2015). 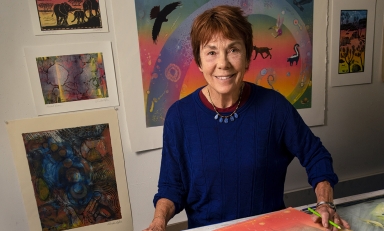