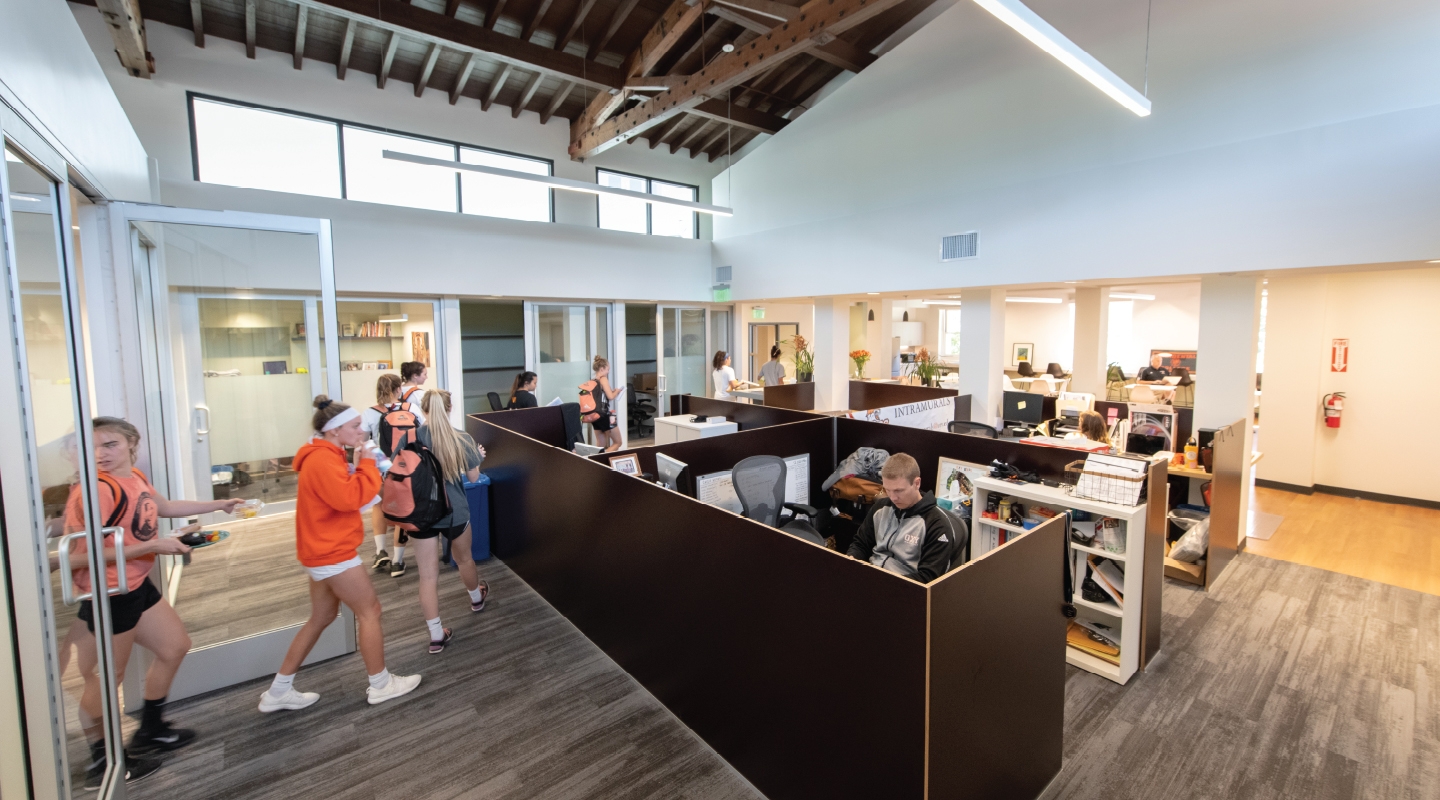 More than half a century has passed since the construction of Rush Gymnasium (designed and built by Neptune Thomas in 1965) and the renovations to adjacent Alumni Gymnasium—a classic Myron Hunt structure that has housed the offices of the Department of Physical Education for Men since its construction in 1926. (The Women’s Gymnasium, erected in 1922, occupied the space that decades later became the Art Barn and now houses the Cooler.)

While the 1965 renovation of Alumni Gymnasium that brought men’s and women’s under one roof “was a big deal,” in the words of Jim Dennis ’66, a 21st-century makeover was long overdue. And in reimagining the space for the future, the building’s aesthetic charms have been rediscovered, according to Tom Polansky, the College’s director of facilities, who oversaw the remodeling.

“When we began looking at this project, we popped up a ceiling tile to see what was up there,” he says. “What we found was a dirtier version of those timbers”—a post-and-beam style of construction that’s a signature trait of a Hunt project. “That’s meant to be seen and enjoyed.”

In adding air conditioning to the building as part of the 1965 renovation, contractors did “what everybody did in the old days,” Polansky adds. “They lowered the ceiling down to 9 feet to trap the cool air and reduce the amount of air volume that needed to be conditioned for heating and brought in duct work above the ceiling space.”

A few modern touches, such as a floor-to-ceiling window treatment in the conference meeting area (the former Roy Dennis Trophy Room), bring the structure closer to its surroundings. “We wanted to make a more overt connection with what’s happening outside with the track and football field, the new pool, and the tennis courts,” Polansky says. “This feels like that whole spirit of team was successfully realized.”

The Oxy campus has the largest collection of intact Myron Hunt-designed structures—19—in the nation. And the Payton Jordan Athletic Offices honor the legacy of not only Oxy’s legendary “Coach of Champions,” but also its architect of record. “A lot of these spaces are beautiful time capsules,” Polansky says. “This is one of those spaces.”