Words to the Wise: Jean Wyatt 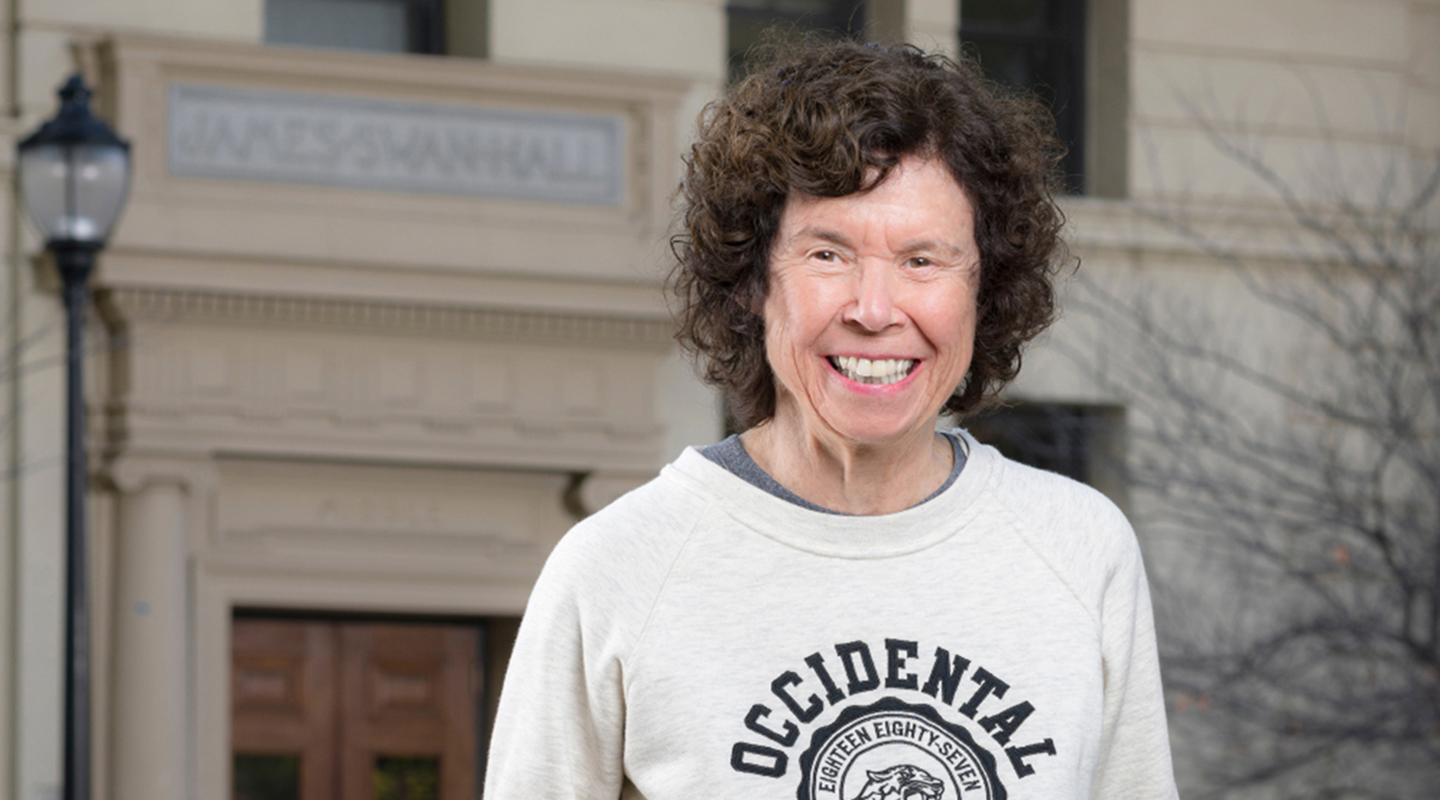 Professor of English Jean Wyatt is retiring after an unprecedented 51 years in the classroom. This tribute is part of the Spring 2021 magazine.

Growing up in a "conventional middle-class household" in Pasadena, "I was supposed to do things like clean up my room and wash the dishes," Jean Wyatt recalls. "I wasn't supposed to spend time on reading because that wasn't part of the program." But she found salvation in the pages of Little Women, Heidi, and The Wizard of Oz. "Those childhood books were freeing for me."

After 51 years in the classroom at Oxy—a milestone matched only by Professor Woody Studenmund, with whom she started at Oxy in 1970—Wyatt reflects on the lasting impact of "those early girl books," the evolution of her curriculum, and offers a couple of recent novels for your summer reading list.

On Dorothy and Jo as role models: “In The Wizard of Oz, Dorothy chooses her own goal to get to the Emerald City. Everything she needs is in that basket over her arm, so she's self-sufficient. And when she does join friends along the path, they're the opposite of her nuclear family because there's no one in authority over her. Not only are they not parental figures but they're not human, either. There's a natural equality among them—she helps them and they help her. Those ideals of autonomy, self-sufficiency, ambition, choosing your own goal, and choosing your own path—all of that was new because that wasn't the way that my family operated.

“Little Women and Heidi had similarly useful role models—girls active and doing a lot of tree climbing. In the case of Little Women, Jo wrote books and she climbed out the window of her house to go into town and get them published. There were all these images of very active and creative female figures.

"When I wrote Reconstructing Desire [published in 1990], I did a chapter on children's books for girls and asked the question, Can reading change the reader? And I used very simple ideas from Freud about repression and the unconscious that in a conventional nuclear family like my own, the aberrant desires of the little girl are repressed. And these ambitions that were not proper for a little girl—like anger, ambition, and aggressivity—they aren't part of the conscious mind because you're being raised in that way. And Freud says that the conscious mind works by words, but the unconscious mind works by images.

"So those images of Jo in Little Women climbing out the window, shinnying down a tree, taking the bus to the town to publish the stuff she's writing—even the attic room where she chooses to spend her time by herself writing—those were images. My theory was that girls could use those images to tap into desires that weren't conscious and use that energy in the unconscious fantasy world to have desires that were prohibited by the family and by the conscious mind. So that was the idea of how reading—and in particular, those children's books—could change the reader.”

On coming to Oxy: “When I started at Occidental, there were women in the English Department who were strong, smart, and writing interesting things. Marcia Kinder and Anne Howells—along with Jane Jaquette [in politics and diplomacy and world affairs]—were wonderful role models of how to be a different kind of woman than my family had taught me.”

“My department was very supportive of me from the beginning and that's been enormously helpful. Especially in the early years they were very flexible about letting me teach new courses all the time. I recently started teaching a new course called Money, Gender and the Nineteenth-Century Novel, which looked at theorists of the economy in the 19th century and then novels that showed the progress of the industrial revolution as it covered that whole century.

“We started with Pride and Prejudice when land was the currency that gave you your status; then [Elizabeth Gaskell's] North and South, which shows the industrial revolution; and so on for each stage of the 19th century, which was full of changes and manias and collapses on the stock market. That was just fascinating. I had really good classes who seemed to enjoy it.”

On developing critical readers: “One thing I have done for years is require that each student write me a two-page typed reflection on the novel that we're reading at the time. The grade for the journal is very small—I just give pass, fail, or distinguished—so I minimize the amount of time that they're going to spend thinking about how I'm judging it. And I recommend that they don't care about punctuation or grammar that they just take an idea and then develop their own creative interpretation of a novel.

“The journal entries I'm getting this year from my students are really smart. They are able to develop an idea really fully. I'm not teaching creative writing—I'm teaching literary analysis—and certainly they find their own voice that way. In class, too, I encourage student to say their own opinions of the text, even if they disagree with mine—although it's nicer when they agree with mine.” [Laughs.]

Her writing routine: “I write in the morning, from about 8:30 a.m. to 12 noon. And I write every day, inspiration or not, because you have to be there at the keyboard if an idea comes, you want to be there to catch it. I generally get my ideas as I write, and as I reread the novel, I get more and more ideas about the novel.”

Read any good books lately? “Helen Oyeyemi’s Boy, Snow, Bird is a really fun read. Sometimes it's hard to figure out what's going on, but very intriguing. My students like that too. What else? Louise Erdrich’s The Night Watchman [winner of the 2021 Pulitzer Prize for Fiction] is a great novel with really interesting characters. It’s about a community of Native Americans and the government that's threatening to take away their land.”

Mirin Fader ’13: Jean Wyatt was my English and comparative literary studies professor, but she was, and still is, so much more than that. I consider her to be one of my closest confidants and friends. She is my literary best friend. I worked for her as her research assistant during my time at Oxy, helping her research her Toni Morrison book, because we both share a love for Toni Morrison. That work continued after I graduated. But what I treasured most about our relationship was so much beyond the classroom.

Professor Wyatt and I still read books together for fun. Before the pandemic, we’d meet up at our favorite cafe in Santa Monica for brunch and books. She is one of the most lovely, most intelligent, most hard-working people I know. And nobody loves literature more than she. Nobody appreciates the work of a writer more than she. I’ll never forget sitting in her class, Women Writers (by far the best class I ever took at Oxy) when we were discussing Virginia Woolf. When Wyatt was explaining to us Woolf’s suicide, she started to tear up. She had to take a pause. I knew she loved Woolf’s work, but I realized in that moment that Woolf’s work meant so much more to her than I thought. That moment changed the way I saw literature, the way I looked at my education.

Books are not just pieces of paper strewn together; they are deeply impactful to all of us who have the privilege of reading. The fact that Woolf moved Wyatt to tears made me feel so lucky to have her as a professor. As a role model, as someone who loved literature, who was as moved by the text as I was. Professor Wyatt continues to inspire me and motivate me. She tells me that I’m capable, and reminds me of the work I’ve put into my own writing. We spoke last week, catching up by phone about what we’ve been reading, how we’ve been feeling. We plan to meet up at our favorite brunch spot after we both get vaccinated. We’ve already picked our next book: Peaces, by Helen Oyeyemi.

Fader is a staff writer for The Ringer, writing long-form features on all sports. Her book, Giannis: The Improbable Rise of an NBA MVP, will be published in August by Hachette Books.

Cristina Escobar ’06: I met Dr. Jean Wyatt when I was an 18-year-old college kid. Her classes were always so rich, filled with passion for ideas, literature, and a truly intersectional approach to identity. I quickly decided I needed more—so Jean (as she instructed me to call her some 15 years ago after I graduated) became my adviser, the professor I took the most classes from, and my boss—as I worked for her as a research assistant (better than spending Friday nights as a cashier at the Cooler). I even did an independent study with her, driving out to the Palisades in my ’93 Miata to meet her at a cafe and discuss my senior thesis.

Looking back on my time as her student, it’s clear she influenced my path in so many powerful ways. That senior thesis? I wrote on Soledad by Angie Cruz, a tale of domestic violence from the Latina perspective. I now serve as director of communications for the leading organization mobilizing Latinxs against gender-based violence. All those rich discussions on novels and their narratives? I now freelance as a TV and movie critic, using media to discuss issues ranging from immigration to miscarriage. That was the greatest formal lesson Jean taught me—that art is a window into our society, the way we debate our values, and the place where we make meaning out of this human experience.

There were lots of informal lessons, too. I still remember her instructing me on email etiquette, when to respond and what was worthy of a quick note, something I take for granted now but had to be told back then! And of course, there was her example as someone living “the life of the mind,” as we both jokingly and earnestly called it. Formal education—the institution of it—may have connected us but it never contained us.

After graduation, I roomed with one of her other favorite students, Forrest Havens ’06 (no rivalry between us, I swear!), and the three of us had a “book club.” I put it in quotes because we weren’t reading the latest best-selling novels. We were dissecting dense theory, putting the ideas together in Jean’s mostly empty and all-white office off-campus. I don’t know anyone else who read literary theory for fun but it was a joy for Forrest and me, getting to know Jean more, engaging with big ideas with her, and building our own little intellectual community.Forrest and I eventually left Los Angeles. I stopped my part-time research assistant gig. But I never lost track of Jean. We get together when we can—I got to see her when she came to San Francisco to accept the Toni Morrison Society Book Prize, and before the coronavirus, I’d get down to L.A. about once a year. She gets my (very exclusive) Christmas card and usually drops me a note after. I’m even thanked (along with Forrest!) in the acknowledgments of her most recent book, Love and Narrative Form in Toni Morrison’s Later Novels.

I know Oxy will miss Jean’s scholarship, warmth, and curiosity. But after 51 years, she’s more than done her service. I wish her joy and fulfillment in this next phase and am sure the life of the mind will continue for Jean and so many of her former students.

A writer and activist, Escobar is the co-founder of latinamedia.co, director of communications and marketing for Casa de Esperanza, and a member of the Latino Entertainment Journalist Association.