Words to the Wise: Saul Traiger 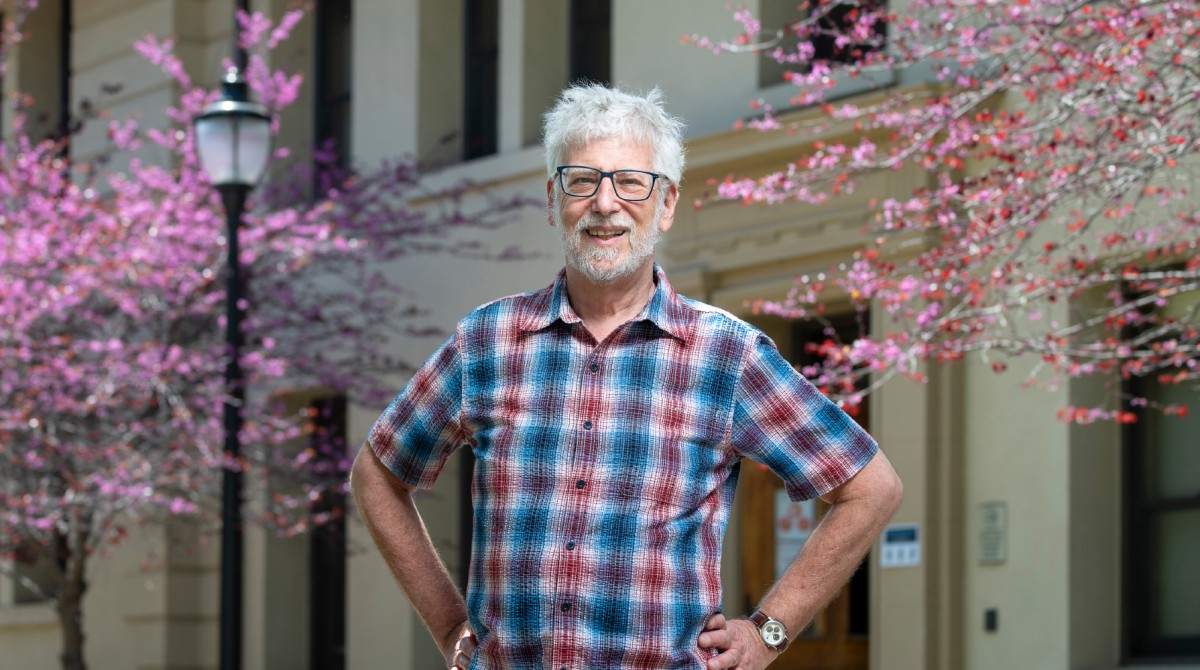 Professor of Cognitive Science and Philosophy Saul Traiger is retiring after 36 years at Oxy. This tribute to his career is part of the Spring 2021 magazine.

Favorite class: "I've enjoyed every class I taught, so it's hard to single out one as a favorite. Perhaps the course that most stands out is Introduction to Cognitive Science. Under a different name, it was among the very first courses I taught at Oxy; the enthusiasm of the students in that first term laid the groundwork for the major in cognitive science. That course has evolved with the major and the contributions of other faculty in the Cognitive Science Department. It has been team-taught since the 1990s; teaching it with my colleagues has been an enormously rewarding experience for me, and, I hope, for students and faculty."

Plans for retirement: “In addition to carrying out my research agenda in philosophy and cognitive science, I will continue as a volunteer ski patroller at Mount Waterman, a small ski area in the Angeles Crest National Forest, in operation since 1939, just an hour from campus. I also hope to spend more time underwater, as a scuba diver, and at the surface, as a road cyclist. At home, within earshot of Hillside Theater, I’ll spend more time practicing jazz guitar.”

Retiring during the pandemic: "Well before the pandemic, I had already set my retirement for August 2021. Right before spring break 2020, I taught my last classes before heading to Brighton, Utah, where, during winter and spring breaks, I have worked as a visiting ski patroller for many years. Then, on the mountain, in the patrol top shack at 10,600 feet, I learned that Oxy was moving to remote instruction after spring break. I realized then that I had already given my last in-person lecture, that Friday before spring break."

Oxy then and now: "There have been many changes since I arrived in 1985. I was among a small group of faculty who were interested in role of computing in philosophy, psychology, mathematics, biology, and other fields. Many of our colleagues were uncertain about how this line of inquiry fit into the liberal arts. Some thought that fields like artificial intelligence, for example, were at best trendy and temporary. However, in 1986, Oxy became one of the first in the country to introduce a major in cognitive science; just a few years ago, the College added a major in computer science. Oxy's curriculum now robustly represents the role of computation in the full range of intellectual inquiry."

A special place: "I treasure the relationships I’ve formed with so many wonderful students, faculty, and administrators. Almost from the moment I stepped onto campus for the first time, I discovered that Oxy is a special place which recognized and nurtured my talents and thus made it possible for me to fully support the intellectual and person growth of my students and colleagues."

John Eisenberg ’88: I walked into Saul’s classroom the first day of my sophomore year. To that point, I had been a terrible student. I signed up for a philosophy course as part of starting over, reasoning that I stood a better chance of academic success if my courses actually interested me. But I had also won the academic lottery, as Saul would turn out to be one of the two best and most important teachers I have ever had. (The other won the Fields Medal, often described as the Nobel Prize in mathematics.)

Philosophy fascinated me, especially as taught by Saul. I began to work hard, not willing to waste a class by not being prepared or to risk potentially letting Saul down. I eagerly spent enormous amounts of time thinking through the issues we discussed and reducing my thoughts to writing for various assignments. I imagine that Saul spent similar amounts of time preparing for class, as his lectures wove in elements of prior classroom discussions and his feedback on writing assignments was both detailed and incredibly instructive.

I often worked through the night and then intercepted Saul as he arrived at his office in the morning. He patiently listened to the fruits of my labors and warmly but incisively analyzed my work. I’d repeat the process that night, improving my thoughts each time. Saul was (nearly literally) always available and always discussed philosophy with the perfect mix of encouragement and searching review. I took as many courses from Saul as I was allowed. My mind had fully awakened, my GPA just about doubled (again, nearly literally), and I never looked back.

If I hadn’t run into Saul, I don’t know what would have happened to me. I do know that he was a large part of what turned things around for me. I’m happy for Saul, who will be able to do so many things he long ne­glected to the benefit of his students. Saul and his family deserve it. But I am sad for any future me who walks into a classroom and doesn’t find Saul at the podium.

Jan Benway ’94: I didn’t meet Saul Traiger until my junior year, but he had a huge impact on my life. On a sophomore whim, I took Philosophy of Psychology: Minds and Machines, a class Dr. Traiger had developed, and I found my calling in cognitive science. As head of the cognitive science program, Dr. Traiger became my adviser when he returned from a sabbatical in Japan. His curriculum helped me develop a fascination with how people interact with computers, and how the design of computer software influences how people are able to use it.

We worked together over the following summer to develop a “gopher” site—a way to look up information over the internet just before the World Wide Web came into being. Dr. Traiger was a beta tester for Mosaic, a new piece of software that let you interact with the internet as multimedia. That was my introduction to the web, in 1993. It was a relaxing and productive summer—we developed the new gopher site, wrote up help docu­mentation that was published in a paper-based newsletter, and gave a presentation at an academic conference to publicize it.

Dr. Traiger taught the senior seminar in cognitive science and helped us all think about our beliefs about the world, and whether we believed the logical consequences of our beliefs. He helped me figure out what I wanted to study in graduate school and challenged me to look for more and better opportunities. He helped me keep in touch with the Occidental community after I graduated and invited me back to give a seminar on my Ph.D. research. He is someone with a huge variety of interests who challenges students to synthesize their knowledge and go further. When I think of Oxy, I see Dr. Traiger striding across campus, the platonic ideal of a professor in his element.

Daisy Zhang ’16: Professor Traiger was my faculty adviser upon matriculation. Born and raised in Beijing, I was excited but also anxious about my new life in Los Angeles. During our first meeting, hearing that I was worried that my limited English would get in the way of exploring my interests in philosophy, Professor Traiger encouraged me to take his Historical Introduction to Philosophy class. I was skeptical but registered in the course; reading Descartes’ Meditations, I was hooked from the first week.

From there, Professor Traiger went out of his way to support my learning. He would go over my papers with me word by word and answer all my questions not only after lectures and during office hours but also over IMs at odd hours of the day. By the end of my sophomore year, I had taken four philosophy courses; eventually, I graduated with a double major in physics and philosophy.

Academics aside, Professor Traiger also made sure to connect with international students beyond academics: We were invited to his house to celebrate Thanksgiving with his family; after class and during office hours, we talked about philosophy but also everything else. It is a bit difficult to describe the impact of this aspect of our interactions, so I will just say that I learned about piggy banks and Craigslist and used a whipped cream dispenser for the first time because of Professor Traiger and his family. Now that I feel most at home in Vancouver instead of my hometown, Beijing, reflecting on my time at Oxy and in North America, there is no doubt that Professor Traiger’s encouragement, nudges, and kindness set the tone for my adult life.

“Be a philosopher, but amidst your philosophy, be still a mensch.” This quote has been on Professor Traiger’s website for as long as I can remember. It also captures how I see him—as a philosopher and an educator, but most important, a mensch.