Words to the Wise: Scott Bogue 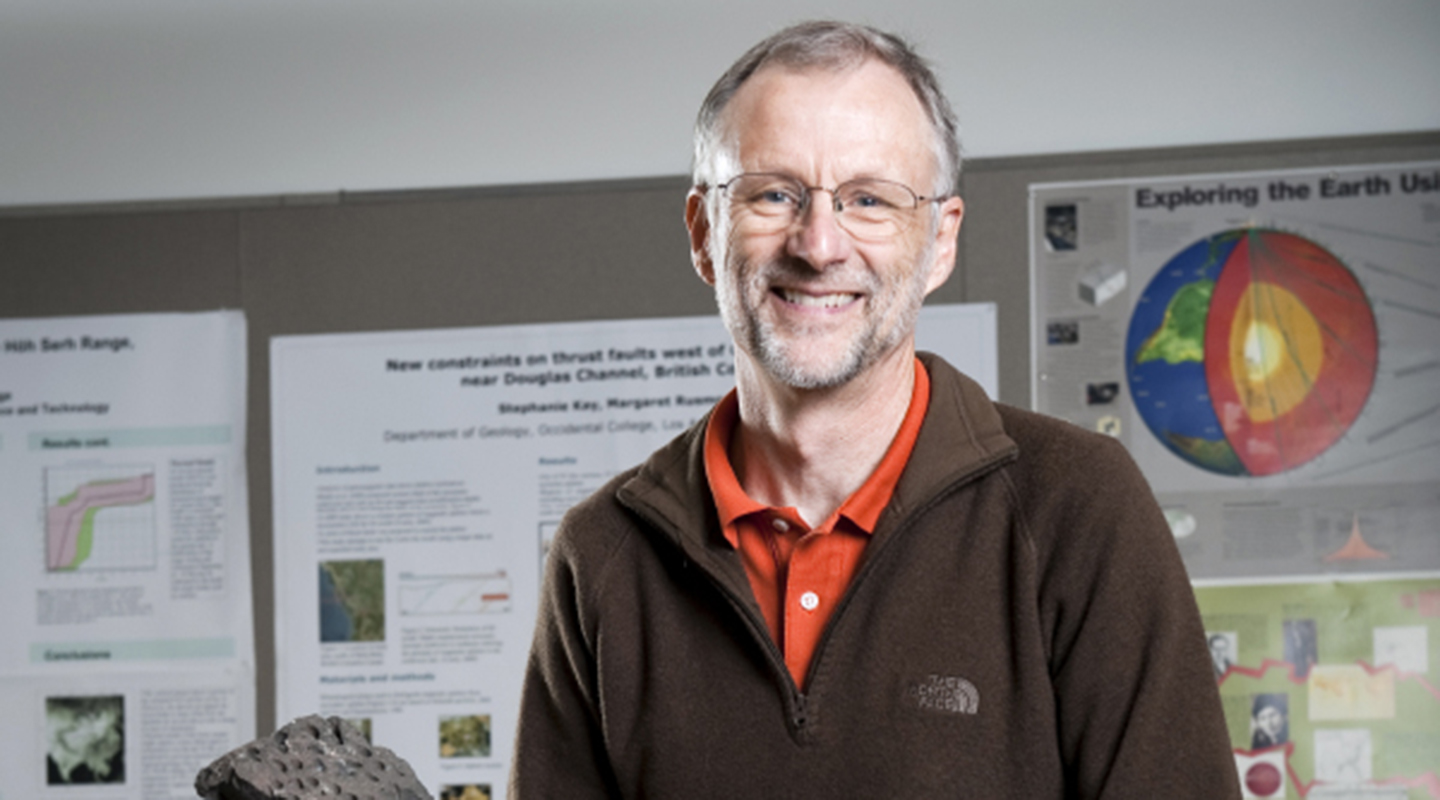 After 35 years at Oxy, Professor of Geology Scott Bogue will retire in September. This tribute to his time at Oxy is part of the Spring 2021 magazine.

His favorite class: “There are two: Global Geophysics and Tectonics, which I have taught 25 times since 1987, and Earth’s Climate: Past and Future, which I have taught about 17 times since 1994. Students in both these classes were a mix of geology majors and others, often non-science majors. It was always interesting trying to find a middle ground that worked for students with quite different backgrounds. Both courses, but especially the Climate course, involved a fair bit of real-time improvisation on my part because of exciting new research that seemed to always be coming out as the course was in progress.”

Plans for retirement: “In the short term, I recently received word from the Dean’s office that I will be able to keep my paleomagnetism lab operating for a while after I am officially done in August. This was great news because I have been involved in a large, multi-disciplinary project with colleagues at University of Oregon. The inability of students from Oxy or U of O to work in the lab during the pandemic has put us well behind schedule.  Once that work wraps up, I am looking forward to devoting more time to cycling, target archery, fighter kite building and flying, my guitar and ukulele, and other passions—while waiting for Margi [Rusmore, professor of geology and the Michael G. Gibby ’68 and Barbara J. Gibby ’68 Professor of Science] to wind down her Oxy career!” 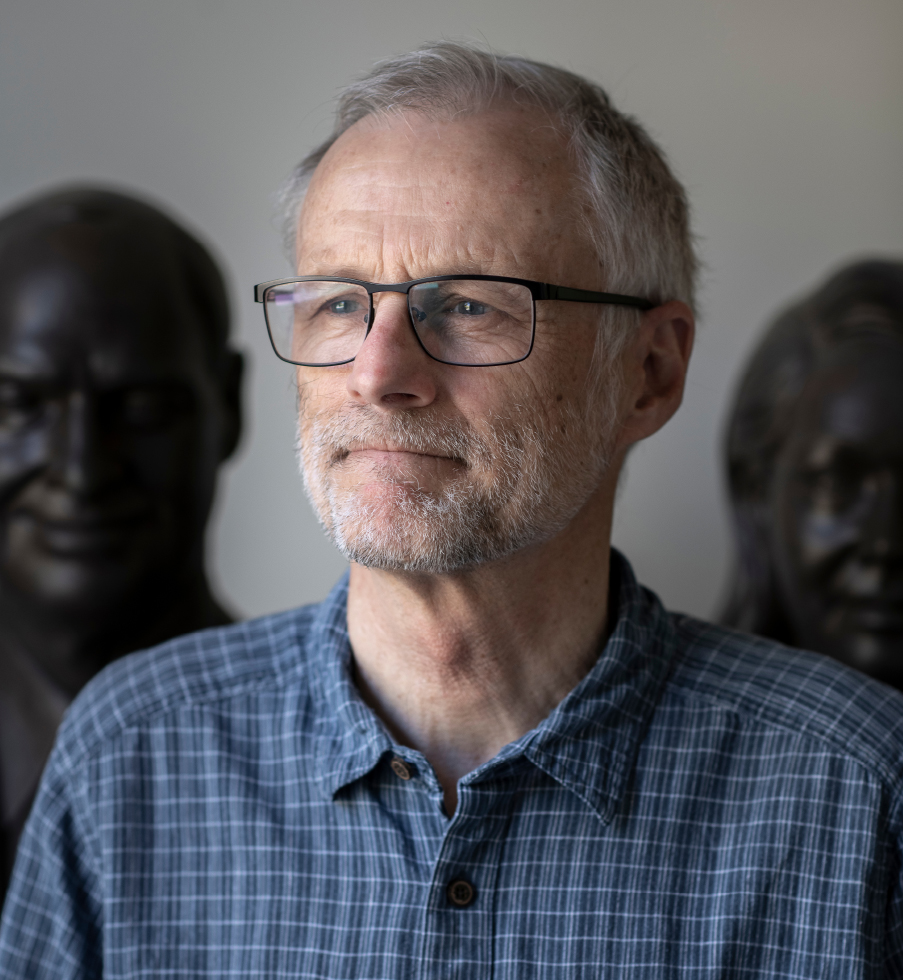 On retiring during the pandemic: “What can I say: 'sub-optimal'? In truth, I have gotten off easy compared to most of my faculty colleagues. I was co-teaching Structural Geology last spring, but finished off my half of the course (with students, in the classroom) before spring break and the start of lockdown.  My luck held through the fall semester, when I was scheduled to do no teaching. But now I am finally experiencing (think “Zoom”) what most faculty here have been living for the past year. It is certainly not how I was imagining my last class at Oxy.

Shoutouts from Scott: “To my geology and physics colleagues, to the many faculty I served with on Advisory Council, to the broader group of Oxy folks that I interacted with as associate dean, and (last but not least) to the ragtag band of faculty and friends who were along for our magical run to the 2017 Oxy Summer Softball championship!”

Jeff Amato ’90: In the fall of my sophomore year, I was living in the first co-ed Norris suite: third floor Orange (we had an environmental theme—which we pursued through diligent recycling of beer cans). I had several roommates who had already taken the introductory geology class, and they spoke highly of the instructors and of the all-day field trip around Los Angeles. So, I signed up for the course, as an English major, to take care of my lab science requirement.

The class was interesting from the start: Plate tectonics! Volcanoes! Earthquakes! A few weeks after the quarter started, on October 1, 1987, I was awoken suddenly and rudely by a 5.9-magnitude earthquake. It felt like the epicenter was beneath the Freeman Union, but instead it was in Whittier, about 25 miles away. I grew up in Walnut Creek in the Bay Area, and I had felt small earthquakes before, but never one as large as this.

Scott devoted a fair amount of time in the next geology class discussing the fault systems of Southern California and the earthquake’s likely causes. I remember asking him if geologists got excited about earthquakes despite their destructive power. He replied something to the effect of, “We are happy with getting more data but, of course, we don’t like when people are injured or killed.”

I did well in Scott’s class, which made me consider at first minoring in geology, then double-majoring, and then after having my mind blown in Jim Woodhead’s courses and Scott’s Plate Tectonics class, I dropped English to go full bore into geology. I never looked back.

Scott had incredible enthusiasm and energy. I still remember him bounding up the steps of Fowler Hall, two at a time, without spilling a drop of his coffee. I learned that he and I shared an interest in the Grateful Dead, and I gave him a tape or two and even saw him at a Dead show at the Forum once (worlds colliding!). He and his wife, Margi Rusmore, hosted a senior seminar at their faculty house on Campus Road that was remarkably similar to graduate classes I took after Oxy. I went on to receive my Ph.D. from Stanford and have enjoyed an incredibly rewarding career since—and I owe many thanks to Scott for starting me on the path of appreciating Earth science.

Amato has been a professor of geology at New Mexico State University for 21 years.

Daniel Minguez ’09: Cormac McCarthy once wrote, “No creature can learn that which his heart has no shape to hold.” Well, I think Scott Bogue proved him wrong. Here I am, 10 years a professional geologist, and I don’t really like rocks—not for their own sake, anyway. But Scott’s unique mentorship helped me appreciate the bigger picture that emerges from studying those little pieces of Earth.

Want to understand climate change in the context of geologic history? We will need to examine millimeter-scale layers of ice. To understand the planetary-scale movement of plates that forged our mountains, we must listen to distant tremors and study the ancient magnetization of rock samples that could fit in your hand. Why hasn’t our atmosphere been blown away by the solar winds? Aha! It’s that faint force that orients your compass whose origins we must understand.

Scott showed us geology students, eager and reticent alike, the big picture of Earth science. And he demonstrated how diligence and attention to detail could reveal a greater understanding of geology while having a positive impact on those around us.

By the time I was ready to take ownership of the lessons Scott and other geology faculty had been teaching me, I was near the end of my career at Oxy as an English major. I had no regrets about that, but I did have a new direction. I wanted to keep learning about the Earth, particularly through geophysics. Scott mentored me for two years after graduation, bringing me onto a collaboration with the U.S. Geological Survey that gave me a foothold in the geosciences.

The experience taught me lessons in experimental design that I use to this day. And it taught me a lesson in generosity that I am still striving to live up to. Scott’s attention to his scientific work and his students has amounted to a big impact in both, and his students at Oxy have been so lucky to have him.

Minguez is an exploration geologist at Chevron in Houston.

Yiming Zhang ’19: SQUID is an acronym for Superconducting Quantum Interference Device—and I was surprised to find out that Occidental is the only college in the United States with its own 2G SQUID rock magnetometer. Only later into my senior-year research project did I realize that Scott Bogue ran one of the nation’s foremost laboratories for paleomagnetism research—and how lucky I was to conduct research under his mentorship.

Four years ago, as a newly declared geology major, I had little knowledge in geology, not to mention about research. My academic adviser, Margi Rusmore, recommended me to her husband and colleague for a senior- year research project. Having entered into phased retirement, Scott was something of a mystery for me and many of my classmates, because few of us had taken a class with him.

Scott’s guidance and mentorship inspired me to continue my research. He introduced me to the paleomagnetism community at an American Geophysical Union conference and recommended me to my current adviser. Today I am a second-year Ph.D. student, teaching an introductory geology class and mentoring undergraduates through their research projects. (Scott has given several lectures for my Structural Geology class.) I now realize that being a teacher and mentor involves devoting much time and effort to teaching, overcoming the challenges of explaining new concepts, and building up patience.

When I graduated from Oxy, Scott gave me this haiku:

An ancient time, when
compass needles lost their way,
finding north from south.

What will Scott’s next direction be—biking, building and flying fighter kites, or perhaps something new? I can’t wait to see what’s next!

Zhang is a Ph.D. student at the Earth and Planetary Science Department at UC Berkeley.