Reaffirming Oxy's commitment to global citizenship in historic Johnson Hall, the McKinnon Center for Global Affairs and Choi Auditorium put a forward spin on the possibilities of intellectual endeavor

Shortly before the dedication ceremony for the McKinnon Center for Global Affairs, Ian McKinnon '89 walked into Johnson Hall and for the first time saw architect Hagy Belzberg's radical re-imagining of the building's interior. The former Occidental trustee, who with wife Sonnet provided the lead gift for the project, had just three words: "Wow. It's spectacular!" 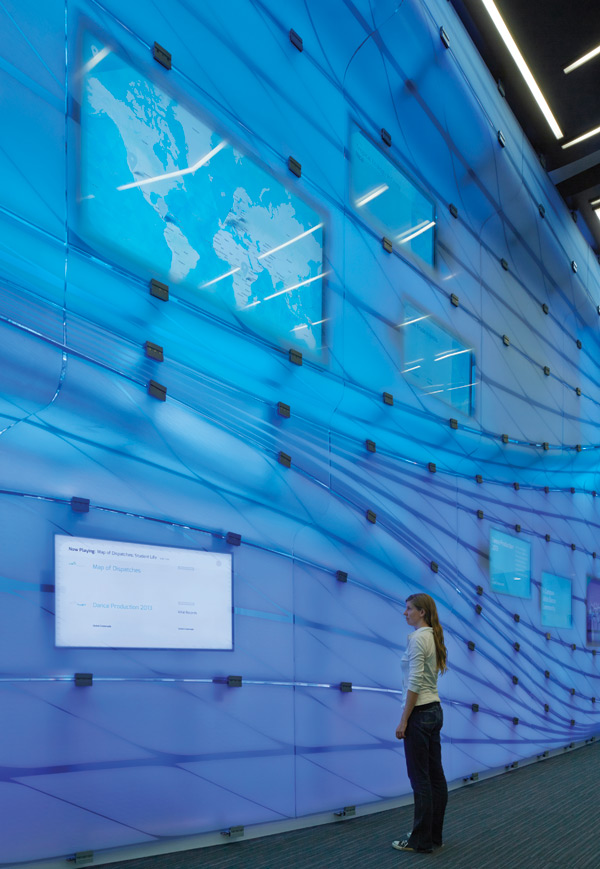 McKinnon's reaction has been echoed by subsequent visitors who step into the new atrium with its two-story-high, LED-lit media wall of sculpted glass and its displays of student research that are the centerpiece of the $11.5-million McKinnon Center. Gathering the departments of politics, diplomacy and world affairs, and foreign languages with the International Programs Office in a single central location, the Center "is Occidental's commitment to global citizenship made visible," President Jonathan Veitch told hundreds of guests at the April 26 dedication.

"We wanted a building that brought together technology, design, architecture, and the curriculum—one that communicated its purpose and function the minute you walked inside," Veitch said. "The surprise of Hagy's design is that the rectilinear beauty of Myron Hunt's traditional architecture is underscored by the sensuous beauty of his contemporary design. … This is the reconcil­iation between old and new, tradition and innovation, and liberal arts and the world."

While the McKinnons made their gift to honor two of Ian's professors who had a major impact on him—Derek Shearer and Roger Boesche—he also paid tribute to Veitch. "He is doing an amazing job of leading this institution," McKinnon said. "It was his leadership that inspired us."

As McKinnon and Veitch spoke, the 10 interactive screens embedded in the wall displayed a constantly shifting array of student and faculty research and coursework. "This is an experiment in what's possible," Veitch explained. "This is our answer to massive open online courses—MOOCs—and the threat that technology will supplant a more personalized education."

The media wall and the custom web application that drives it, known as the Global Forum, is the public space for the display of digital reports from Oxy students studying overseas, for classroom projects that extend the discussion beyond the classroom, and "a public space where the excitement of intellectual endeavor—and liberal arts education in general—is made visible to all," Veitch said.

Other parts of the McKinnon Center, notably the Varelas Innovation Lab on the first floor, are designed as spaces where students, no longer confined to narratives on paper, can develop multimedia projects that incorporate text, video and audio files, photos, infographics, maps, and animation. (That same approach will be at the heart of the upcoming renovation of the Academic Commons at Clapp Library.) 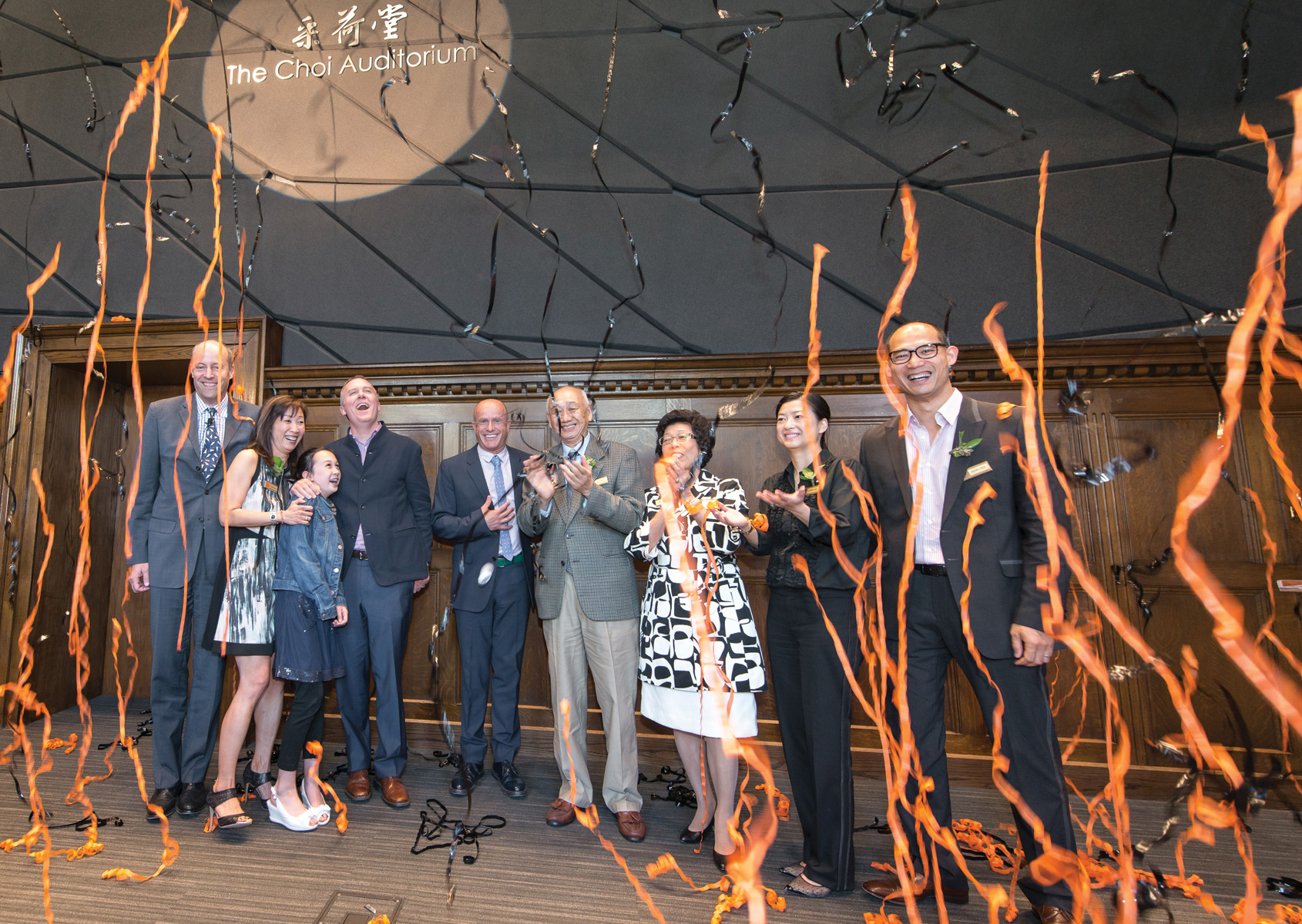 Following the dedication, the audience moved to Choi Auditorium, where the Choi family was honored for providing the resources to transform what was originally the College chapel into one of the College's premier venues—one that has been in constant demand since the McKinnon Center opened last August.

"As the United States pivots toward Asia, Oxy is poised to play a vibrant role educating leaders who will inherit a hot, flat, and crowded world," said Lucia Choi-Dalton '89, the first person in her family to graduate from college. "My family is honored that generations of Oxy students will become more informed global citizens here in Choi Auditorium."

While preserving the hand-painted beamed ceiling and quarter-sawn oak wainscoting of what was originally known as Alumni Hall, Belzberg rotated the seating 90 degrees to face west, opened two balconies that can serve as classrooms or overflow seating, and gave the space a dramatic contemporary feel.

So impressed was the Choi family with Belzberg's blending of the auditorium's historical elements with modern design that just the day before it pledged another major gift to help meet the overall construction costs of the project, Veitch announced to enthusiastic applause.

The Chois' enthusiasm for Belzberg's design has been echoed by critics for Fast Company, University Business, and The Archi­tect's Newspaper, in which Michael Webb wrote: "Here, in a traditional liberal arts ­college, we may glimpse the future of education, in which boundaries are dissolved and students are encouraged to teach themselves and share their ideas freely, as well as presenting them to teachers."

While the auditorium has hosted a steady stream of classes, lectures, films, and meetings for months, former Vermont Gov. Howard Dean officially christened the room with the 2014 Phi Beta Kappa lecture, The First Global Generation and How They Are Changing Everything, underwritten by the Ruenitz Trust Endowment.

After the Dean lecture, dozens of Oxy students from a wide range of disciplines offered demonstrations of the global aspects of their work, from students at the Kahane United Nations and Richter Fellows overseas research programs to biology majors who studied bromeliads in Costa Rica and urban and environmental planning students Skyping in from Rio de Janeiro.

"What we're doing now is just the start," said Sanjeev Khagram, the John Parke Young Chair in Global Political Economy and one of the faculty housed in the McKinnon Center. "This building shows what's possible when collaboration and innovation come together. We are on our way to becoming the country's premier liberal arts college for global affairs. We have a great future ahead of us."