A Future Without Football | Occidental College 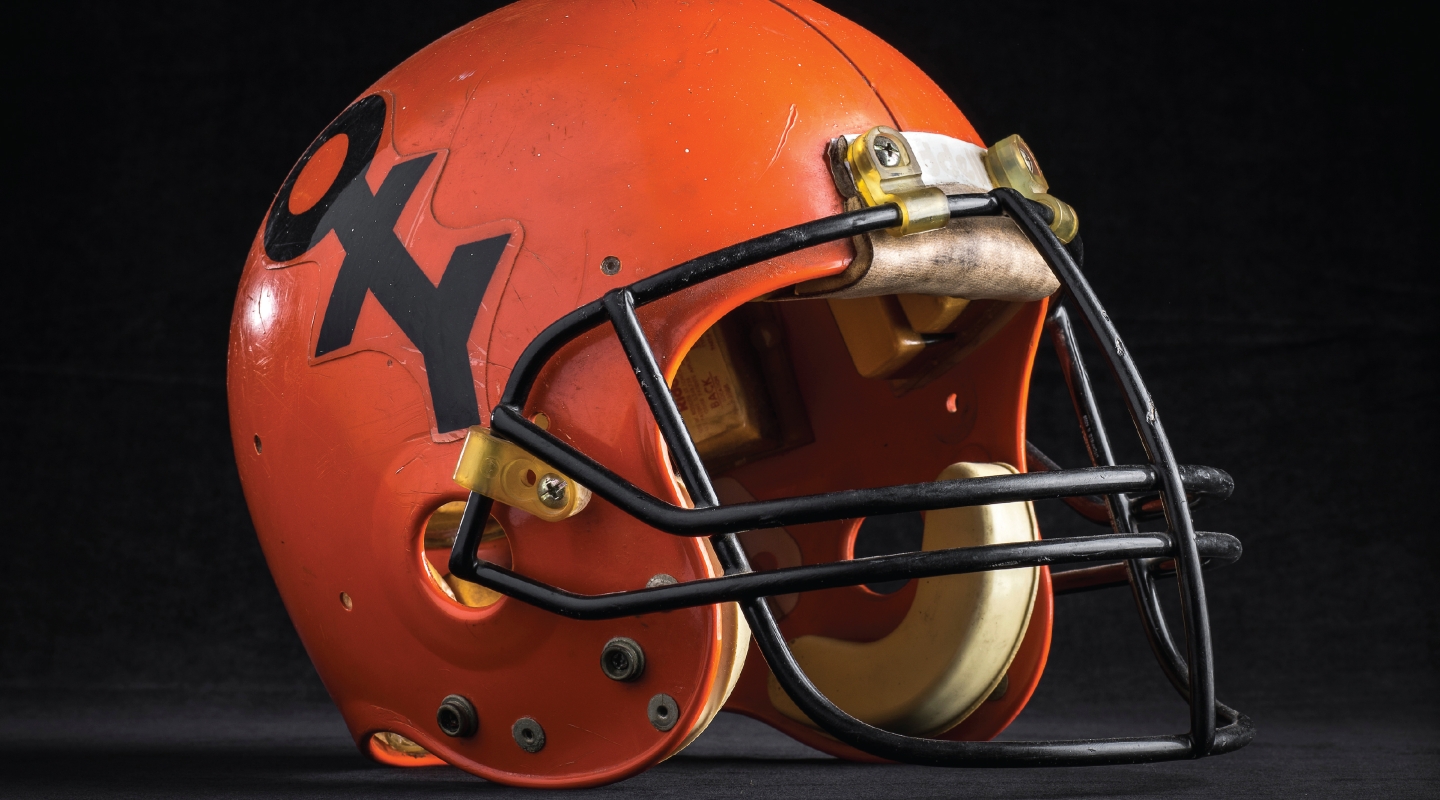 A Future Without Football

Amid a reevaluation of College priorities triggered by the pandemic’s impact, Oxy football is discontinued

On Nov. 16, 2019, at Jack Kemp Stadium, with 7:40 remaining in the fourth quarter and the game beyond reach, wide receiver Lucas Savoie caught a six-yard pass from quarterback Joshua Greaves for the final score of the game in a 67-12 loss to the 9-1 Redlands Bulldogs. For senior economics majors Greaves and Savoie and six of their classmates—who persevered through a tumultuous four years on and off the field—it marked the end of their gridiron careers. While the lopsided score reflected the uneven playing field that Oxy football has faced of late, no one knew at the time that it would be the Tigers’ final game.

After careful consideration and consultation with members of the 2018 Athletics Task Force, football boosters, and the Board of Trustees, President Harry J. Elam, Jr. announced Oct. 13 that Occidental had made the “extremely painful decision” to discontinue its football program. Financial pressures brought by the pandemic required the College to re-examine the structural challenges facing football in light of other priorities, he wrote to the Oxy community. “This was a difficult decision by any measure, but the Board believes it is the right one for the College,” says Board chair Steve Rountree ’71.

While those challenges have been the subject of ongoing conversation for the last three years, the timing of the announcement surprised many. With November application deadlines approaching, the College felt it had a responsibility to alert prospective applicants and provide current players with time to transfer, says Rob Flot, vice president for student affairs, who oversees Oxy athletics.

Over its 126-year history, Oxy football has produced a host of professional players and coaches, among them Jack Kemp ’57, Jim Mora ’57, Bill Redell ’64, and Vance Mueller ’86; 20 SCIAC championships, including 31 consecutive conference wins from 2004 to 2007; and an unforgettable 1949 Raisin Bowl victory over Colorado A&M.

In recent years, the program has struggled to remain competitive in SCIAC. Following three consecutive 5-4 seasons from 2013 to 2015, the Tigers went 1-22 over the next four seasons in conference play, dropping 21 straight games. Even so, individual players continued to make their mark: Quarterback Bryan Scott ’17 became the conference’s all-time leading passer and was named 2016 SCIAC Player of the Year.

The abrupt retirement of Head Coach Doug Semones three weeks prior to training camp in July 2017 left the program reeling, and from the time Rob Cushman was named as his replacement August 1 to opening kickoff 38 days later, the squad shrank from 56 to 47 players. Once play began, injuries further decimated the roster, and concerns about Oxy’s ability to safely field a competitive team led the College to cancel most of the 2017 season.

After a multi-constituent Athletics Task Force recommended continuing the program—with the conditions that it be “both safe and competitive,” while meeting recruiting and fundraising goals—Oxy returned to the field with rosters of 47 and 61 players in 2018 and 2019, respectively. In announcing the adoption of the recommendations, then-President Jonathan Veitch cautioned, “We can’t lose sight of the significant challenges that still exist. … We will continue to monitor and revisit the viability of the football program as circumstances require.”

Despite the lingering questions, the undimmed enthusiasm for the program among football parents and alumni was evident in last April’s Day For Oxy Athletics, with 157 boosters supporting the program.

But the COVID-19 pandemic—which necessitated the suspension of all Oxy sports activities since March—prompted a reevaluation of the larger landscape surrounding football. “We want to offer the best possible experience for our student-athletes,” Elam wrote, “and the College has determined that to do so for football would require a level of investment that is not sustainable, especially relative to other priorities and given the financial impact of the pandemic.”

To safely field a team roster that could withstand inevitable injuries and the rigors of competition, Occidental would need to matriculate up to 25 student-athletes a year—roughly 5 percent of each incoming class, Elam noted, adding, “Despite the best efforts of our dedicated coaching staff, we have found it increasingly difficult to consistently recruit at the level we would need.”

Oxy’s decision leaves the nine-member SCIAC with seven football teams (Caltech left conference play in 1968), including two of Oxy’s oldest opponents: Pomona-Pitzer, whose rivalry with the Tigers dates back to 1894, and Whittier, a competitor since 1907.

Alumni emails to the president’s office supported the decision by a margin of more than 3-to-1, many of them calling it the right choice for the College. Since the announcement, Elam has spoken and listened to football parents and alumni critical of the decision.

Football, together with men’s track and field and women’s basketball, has a high percentage of student-athletes of color, prompting some to question the decision’s impact on Oxy’s diversity. Football alone cannot be solely responsible for diversity, Flot responds: “We need to recruit more student-athletes of color in every other sport and in our admissions process generally.” Given that diversity is one of the College’s foundational principles, “We must and will make a concerted effort to recruit students of color in areas that we have not emphasized in the past,” Elam says. “Increasing our overall diversity in general, and the number of exceptional Black students in particular, at Oxy is a priority.”

Elam, Flot and Athletics Director Shanda Ness stress that the decision is not a referendum on varsity athletics; Oxy will continue to field 20 men’s and women’s teams at the NCAA Division III level. “We maintain an unwavering commitment to athletics as a critical and necessary component of the Oxy liberal arts experience,” Elam wrote, “and we fundamentally believe in maintaining strong and well-supported athletic programs.”

In spring 2021, Elam plans to convene a multi-stakeholder commission to study how to better value and support Oxy’s student-athletes and strengthen both the men’s and women’s athletic programs, with an eye on issues of diversity, academic support, community engagement, and campus culture.

For more on football, visit oxy.edu/newsroom.

Summer/Fall 2020From the QuadAthleticsAdmissionEquity & Justice