﻿He Heard a Symphony

Thank you for the thoughtful obituary of Professor Allen Gross (Fall 2019). I knew Allen and his wonderful family from his first days at Occidental in fall 1983 to his last days in August 2019, when we sat together on his back porch in Pasadena enjoying a beautiful summer evening with some great French red wine. It was a bittersweet last few days. But even then, he still enjoyed talking about great music. 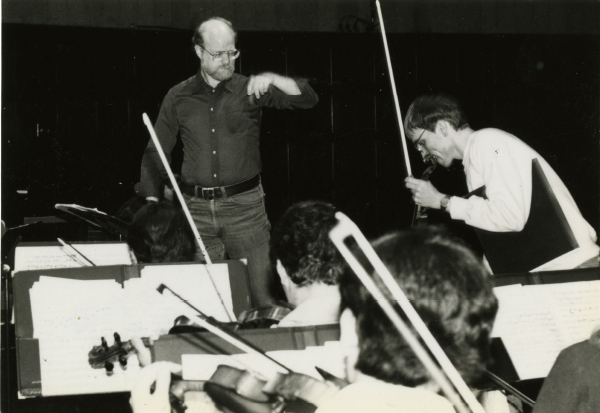 Allen led the Occidental-Caltech Symphony for 31 years, longer than just about any other music director of any kind in Oxy’s history. Only Howard Swan, at 37 years, conducted a musical group—the chorus—longer.

But for Allen it just wasn’t about the quantity of the concerts or the prominent performers. With his devotion to his students and the music, Allen was able to raise the level of musicianship of the Oxy-Caltech Symphony to such a level that it was considered one of the top community orchestras in all of California. Indeed, while Allen was at the helm, The Insider’s Guide to the Colleges said that one of the things that every student should do before graduating was to go to an Oxy-Caltech Symphony concert.

In talking about the last piece he ever conducted, Allen described Haydn’s Symphony No. 104 as “very near and dear to my heart. For me, Haydn makes the world whole. There is this great human optimism that pervades Haydn throughout.” Fittingly, Allen’s last piece was also the last symphony ever composed by Haydn.

“He Gave Me My Name”

When I was a freshman, the Glee Club was lucky enough to take a trip to sing in several sacred and secular spaces in Europe. In preparing for our European tour we all, obviously, had to have a passport. This is where I hit a snag. I registered for college with the surname you all know me as.

However, my passport held a secret I’ve carried since the third grade. As a young feminist, I thought it ridiculous that I carry my father’s last name since my parents divorced when I was 2. So I changed it, and the only vestige of this act of resistance was contained in my passport.

This created a problem since my passport, which needed to be renewed, carried my given surname but my ticket and accompanying documents all had my common surname. It took a few trips and I spent many hours with Tom Somerville at the passport office in Westwood to resolve this issue. The resolution came when he signed an affidavit verifying that I was in fact known as my common name so that both names could be placed on my passport. My passport has read that was ever since.

Tom Somerville passed away after several years living with Alzheimer’s, yet all I can think of are the gifts he gave me. Over my time at Oxy we took two trips to Europe. He gave me the gift of international and domestic travel, friends with whom I made music and found community and with whom I’m still close to this day, and a deep love and appreciation for all kinds of music. He opened up his family life to all of us and gave me treasured memories with Ginnie, Tod, and Ian, and ultimately the confidence to leave California behind and strike out on my own, making music, friends, a community and a life during my years on the East Coast. And of course, he gave me my name.

For four years at Oxy he wasn’t just my conductor—he was a father to me.

Thanks, Professor Somerville, for all your gifts. I’ll always carry you in my heart.

Implicit racism is all around us. Your awareness of it is mirrored by many persons of color. It is unfortunate but it’s the reality we live in.

My professional career also reflected the implicit racism that exists. One example is the comment, intended as a compliment, by a manager to me: “Louie, you know what I like best about you is you’re not a typical Mexican.” (What is a typical Mexican? Also, note that my name is not spelled “Louie.”)

Being aware of the obstacles for those of us who have a greater amount of melanin is the first step in thriving.

On page 3 of the Fall 2019 magazine, there is a set of seven photos. The subject of the last, No. 7, is unidentified. I must confess that it is I.

In “’23 and Me,” the last name of Joaquin Madrid Larrañaga ’23 was misspelled. And in “Waste Not, Want Not,” the class year of Christy Leavitt ’95 was misidentified. Occidental magazine regrets the errors.