The Shape of Water | Occidental College 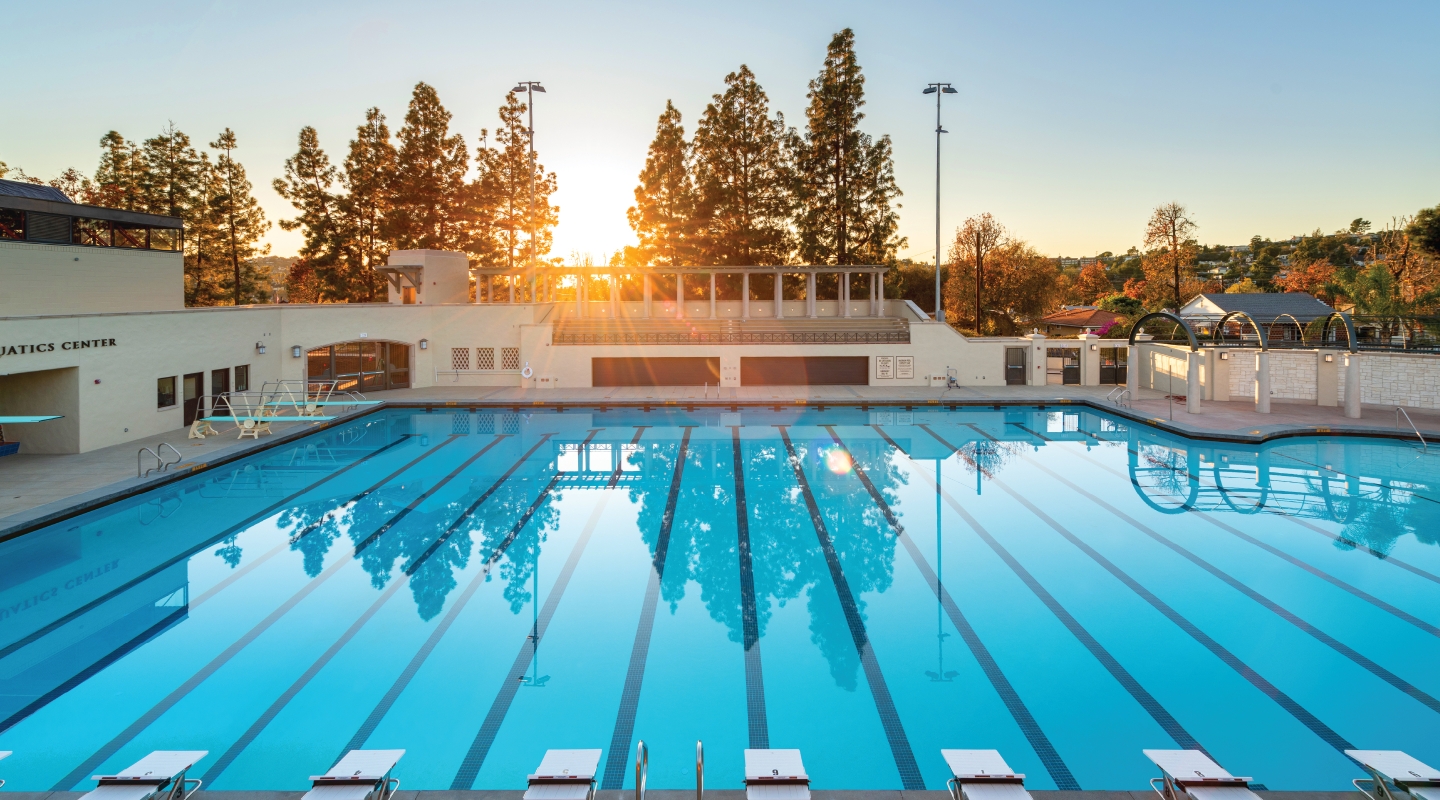 The Shape of Water

When team captain Zander Granath ’20, a sociology major from Salt Lake City, led Oxy swimmers through a rapid-fire rendition of “Io Triumphe” at Taylor Pool before the Jan. 11 Pomona-Pitzer meet, no one paid any particular attention. It was a pre-meet ritual that had occurred hundreds of times before at Taylor, which turns 90 in November. Things were looking up: The sun was out, with temperatures in the high 50s; the sometimes balky scoreboard and timing system were both working; and parents from as far away as Washington state were in the stands to cheer the Tigers on. 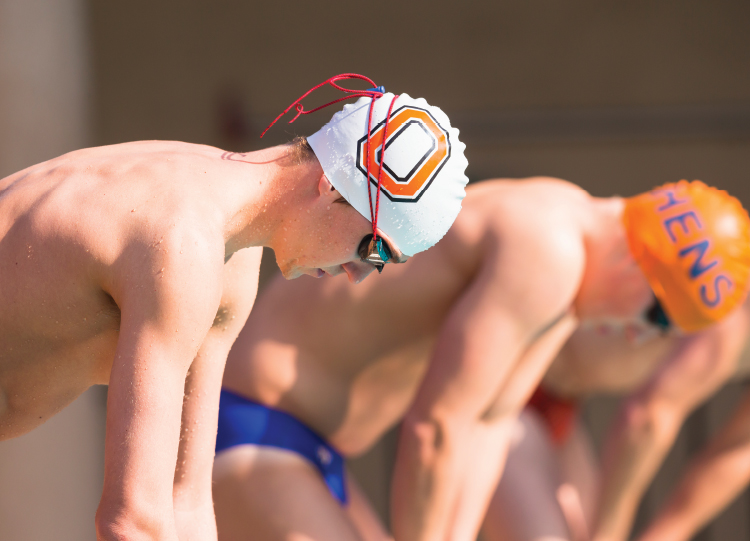 In the back of everyone’s mind, however, was the promise of a new era on the other side of Taylor’s graceful red tile-topped arcade: the new De Mandel Aquatics Center, the new pool just a few city inspections away from opening for business. After literally decades of anticipation, this could have been the very last “Io Triumphe” at the last meet in Taylor Pool, one of the oldest active outdoor pools in the NCAA.

“I’m really grateful I got to swim in this pool,” Granath said between races as towels draped over the arcade’s iron railing dried in the sun. “We’ve produced national champions in this pool. It’s fun to compete against a Chapman or a Pomona and beat them in a meet here. But at the same time I’m envious of the first-years who will get to enjoy most of their career in the new pool.”

Cindy Dong ’22, a media arts and culture major from Sarasota, Fla., manages the swim team’s Instagram account and has been responding to a constant stream of messages asking when the new pool will be ready. “Of course, we’re all looking forward to it,” says last year’s SCIAC champion in the 200 fly. “The first time I saw it filled with water it was like, wow, this is really happening.” 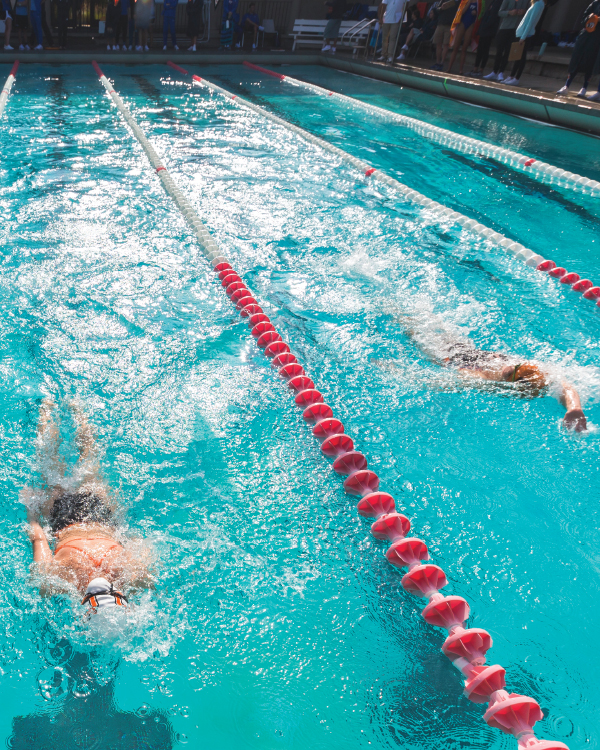 Earlier that morning, before the meet began, as many as eight swimmers were jammed into a single lane to warm up. The new pool has a different kind of problem, if you can call it that: It has 15 lanes, but the scoreboard can only accommodate 12. 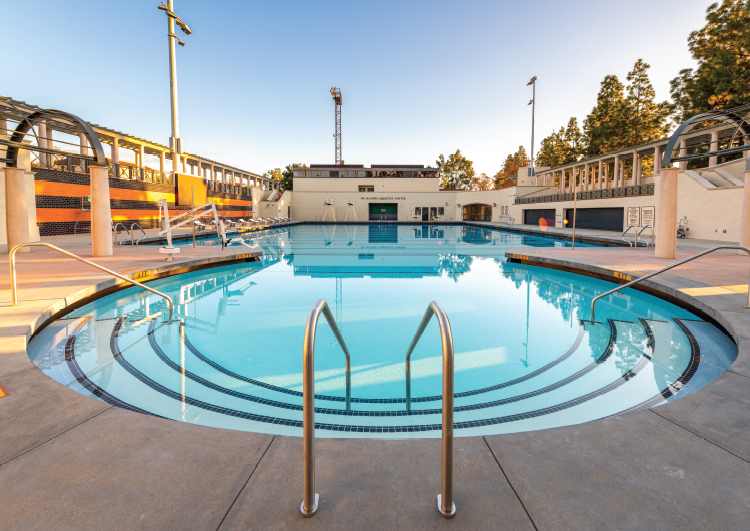 “It’s gorgeous. It’s beautiful. All of us can’t wait,” Jack Stabenfeldt ’14, men’s and women’s water polo coach, says at his desk in the Payton Jordan Athletic Offices. While there has been frustration about the delays in opening, which has been pushed back multiple times, “The bottom line is that the new pool will make swim and water polo more competitive.”

Some of the delays were unavoidable, including 40 days lost to rain during construction, says Tom Polansky, associate vice president of facilities. Others were due to the complexities of building a pool on a sloping site and dealing with inspectors from multiple city and county departments. “But when the crew you bring in to plaster the pool tells you how beautiful the pool is compared to the other jobs they’ve worked on, that helps put it all in perspective,” Polansky says.

After winning the women’s 1,000-meter free at the Pomona-Pitzer meet, Siena Lucido ’22, a cognitive science/group language major from San Pedro, ran through a list of some of the ways the new pool will make a difference. Its 15 lanes mean the team will no longer have to practice in shifts. Team divers who now have to practice and compete in Pasadena will be able to come home for the first time in decades.

As a sprinter, Granath said he is excited about the new pool’s starting blocks—“those will be huge”—and the faster times that will come with a bigger, deeper pool. “We will be able to do so much more,” he said, adding wistfully: “I really am a little bit jealous.” 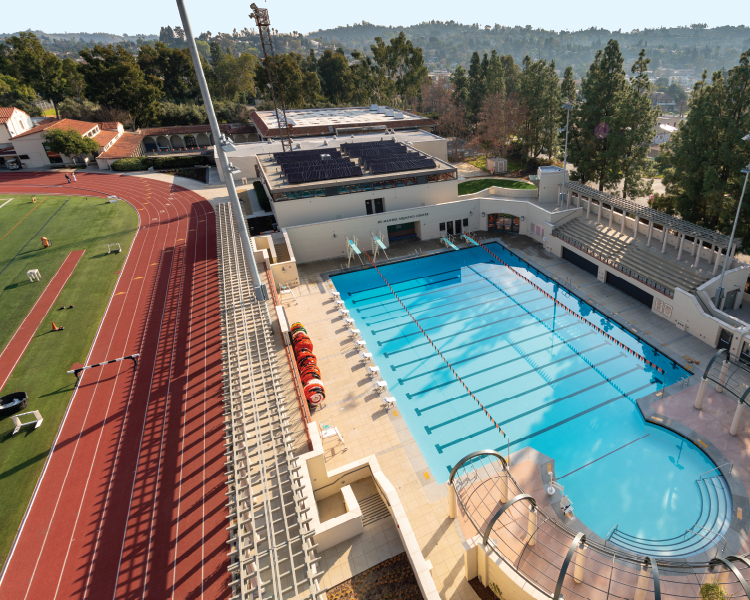 Not far away, All-SCIAC swimmer Laura Chun ’19, a history major from Arcadia, was cheering on her friends and former teammates. “It would have been nice if we had been able to use the new pool when I was swimming, but it’s OK—I loved my experience here,” said Chun, whose father, Ron Chun ’87, also swam for Oxy in Taylor Pool.

After De Mandel opens, current plans call for Taylor to be filled in and the arcaded E.S. Field Building that surrounds it to be restored. The resulting Cannon Plaza will be used as a multipurpose event space.

“It’s a lovely pool. It’s a piece of classic California architecture,” said Ann Rendahl of Tacoma, Wash., who has two sons on the swim team—junior Sam Sachs and first-year Nate Sachs. “I’m glad they’re not going to tear all of it down, given all the history and meaning it has for the College. But the new pool will be much better.”