This page is intended to keep the Oxy community informed about the College’s response to the recent vandalism of a campus 9/11 memorial by providing a home for key College communications. It will be updated as events warrant.

The Conservatives of Occidental student club planned — and registered through the Office of Student Life — a September 11 memorial on the Occidental Quad displaying 2,997 flags, representing each victim of the attacks on 9/11. The flags were placed in the Quad on September 10. At some point in the early hours of September 11, many of the flags were pulled up and thrown in the trash.

The College launched an investigation of this act as a violation of the College’s Code of Student Conduct. In a campuswide email sent out on the evening of September 11, Erica O’Neal Howard, acting dean of students, asked anyone with information about the incident to contact the Student Conduct Office. That investigation is ongoing. Appropriate disciplinary action will be taken against those found responsible.

At the same time, the president, Student Affairs and the dean of the College are working with faculty to actively engage the campus in a thoughtful conversation about free speech, the First Amendment, and balancing strong opinions with mutual respect.

As the Student Handbook states, "Occidental College imposes on students, faculty members, administrators and trustees an obligation to respect the dignity of others, to acknowledge their right to express differing opinions, and to foster and defend intellectual honesty, freedom of inquiry and instruction, and free expression both on and off campus."

The College’s investigation of the reported vandalism of a 9/11 memorial on campus has concluded. Students believed to have been involved in the incident were identified, and the College has taken appropriate action in accordance with the College’s Code of Student Conduct. Federal and state privacy laws prevent the College from disclosing details about the investigation, the findings or the sanctions.

The primary objective of the College’s disciplinary process is to educate students about the effects and consequences of their actions so that they understand the rights and responsibilities of being a member of the Occidental College community.

As President Veitch noted in his September 13 message, the destruction of a memorial is not a form of protected speech. Debate and disagreement at Occidental should be inclusive, not polarizing. He also emphasized that this is an important teachable moment to address complex issues. Faculty and administrators are therefore working together to plan a number of campus activities in the spring semester, including:

By its very nature, free speech encourages widely differing opinions. As President Veitch has said, Occidental’s goal is to provide a model for spirited public debate informed by mutual respect and an open mind. It is our hope that these activities will spur a more thoughtful campus conversation that is needed to fully realize this result.

I write to you today in response to the incident that occurred this weekend in which American flags planted in the Quad in remembrance of 9/11 were removed and put in the trash. We don't yet know who is responsible or what their motives were, but the investigation (as announced by Interim Dean of Students Erica O'Neal Howard) is ongoing. This incident has been defended by some as an act of protected speech. It is not. It is an act of defilement that is deeply offensive to the memory of those who died on September 11th. And it violates the free speech of others, a principle we must hold dear as members of an educational community.

I was just a few blocks away from the World Trade Center in 2001 as the second tower came down. My former university served as a refuge for grieving families waiting to learn the fate of their loved ones. I did not know anyone who was trapped in the World Trade Center, but I worked with colleagues who had friends and family who perished. I chose to honor their memory and that of others by reading nearly every one of the 2,977 obituaries published in the New York Times for weeks afterwards — weeping openly on the subway as I commuted to work. The events of 9/11 run deep.

Most of our students were quite young — between the ages of 3 and 7 — when those tragic events occurred. I recognize that there are many who do not share those memories, or perhaps even fully understand the significance of 9/11 for Americans of all backgrounds and beliefs. Some legitimately question why some lives are remembered more readily than others. I also recognize that the events of 9/11 and the U.S. response in Afghanistan and Iraq — indeed, U.S. foreign policy itself — has a history and a context that is controversial. For many the flag is a source of ambivalence and they seek the means to express the concerns it evokes.

It is worth noting that the flag has been invoked in many other forms of protest throughout our history. Most recently, San Francisco 49er quarterback Colin Kaepernick has chosen not to stand during the national anthem. But this political act does not interfere with the right of others to express their devotion to the flag. On Sunday night, I watched the opening ceremonies of the game between the New England Patriots and the Arizona Cardinals. While the national anthem was being played, two New England Patriots held up their fists in protest, while another helped unfurl the American flag as it was stretched across the field. It is possible to be a patriot — in both senses of the word — and do either. That is democracy at work, and whether one agrees with the protests or the expressions of devotion, we are compelled by our commitments to free speech to respect the rights of both.

As the recent events demonstrate, there are a number of complex and intertwined issues embedded in these political gestures:

These questions require further exploration, and as an educational institution we will do just that. There are no easy answers. But over the next few days I will be working with our faculty, as well as our Academic and Student deans, to develop a program of courses, public events and intimate conversations that will address some of the issues raised above. Announcements will be forthcoming.

Finally, as a result of the incident that took place over the weekend, we find ourselves in uncharted terrain. The story has been picked up nationally and it is likely to be amplified by people who care little for Occidental, our students, or the fundamental ideals that we embrace as an academic community. Comments on blogs, Facebook and other social media have been filled with ugly invective and ad hominem attacks. Now is the time for all of us in the Occidental community — students, faculty, alumni, staff, parents and friends — to come together to provide a model for spirited public debate informed by mutual respect, open minds and our shared aspirations for our country.

Several of you have written to me regarding the 9/11 memorial incident that occurred yesterday. Thank you for taking the time to share your thoughts, questions and concerns. Some of you lost loved ones during the events of 9/11 and are continuing to grieve. My deepest sympathies are with you.

For those of you who asked what we are doing to follow up, the Office of Student Conduct is investigating the matter as a violation of the Code of Student Conduct. This is consistent with similar acts associated with other memorials. It is for this reason that my previous email asked anyone with knowledge of the events to contact conduct@oxy.edu.

Some of you wrote to ask why student events must be registered and what that means. Registering a student event with the Office of Student Life ensures that an activity is calendared for a set period of time and follows school policies in terms of location, safety, etc. All Occidental student organizations have the right to register events. If displays and activities are not registered, materials are subject to removal.

The First Amendment gives everyone the right to free speech. We are free to express our views on different issues, but not to silence or take that right away from others. Vandalism or other property damage to a memorial that has been registered with the Office for Student Life represents an attempt to silence another person’s voice. Occidental College’s Right to Dissent and Demonstration Policy states: However deeply or genuinely felt an act of protest may be, attempts by Occidental College students to counter such protest by physical means are out of order and will not be condoned. According to federal law, the College may limit the time, place and manner of any form of dissent and/or protest.

Expressing disagreement in writing and other forms of peaceful protest are acceptable, and supported and welcomed at Oxy.  At the same time, we must be mindful that our choices about how we express ourselves are likely to have consequences. Strong speech is often met with equally strong speech.

Some have questioned whether the College addresses students who violate policy. I can assure you that the College does take appropriate and proportionate disciplinary action against students who violate policy. However, student conduct is a private matter typically, and the findings and sanctions of individual cases are not shared with the community. Student conduct matters are part of a student’s education record, and are therefore protected by the Federal Family Educational Rights and Privacy Act (FERPA).

Dear Members of the Oxy Community,

I write to you about an incident of vandalism that occurred early this Sunday morning. A student group planned — and registered through the Office of Student Life — a September 11 memorial on the Quad containing many small American flags. The flags were placed on Saturday. At some point early this morning, individuals removed many of the flags and threw them in the trash.

We don’t yet know who is responsible for this incident, but the College is investigating and will take appropriate disciplinary action. If you have any information about this incident, please share that information with us at conduct@oxy.edu.

Freedom of speech is protected by the First Amendment. The right and freedom to debate complex, contentious issues and disagree with each other is fundamental to what we do at Oxy. At the same time, we may not express ourselves in ways that prevent others from engaging in protected speech. As the Student Handbook states, "Occidental College imposes on students, faculty members, administrators, and trustees an obligation to respect the dignity of others, to acknowledge their right to express differing opinions, and to foster and defend intellectual honesty, freedom of inquiry and instruction, and free expression both on and off campus."

Vandalism or other acts that substantially interfere with the rights of others to engage in protected speech violate the College’s Student Code of Conduct and the spirit of this institution. Let us work together to find ways to express ourselves and build a community founded on respect. 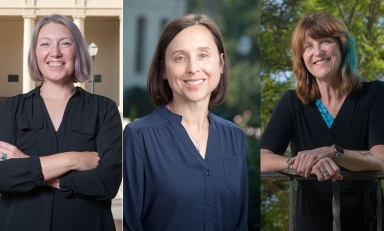