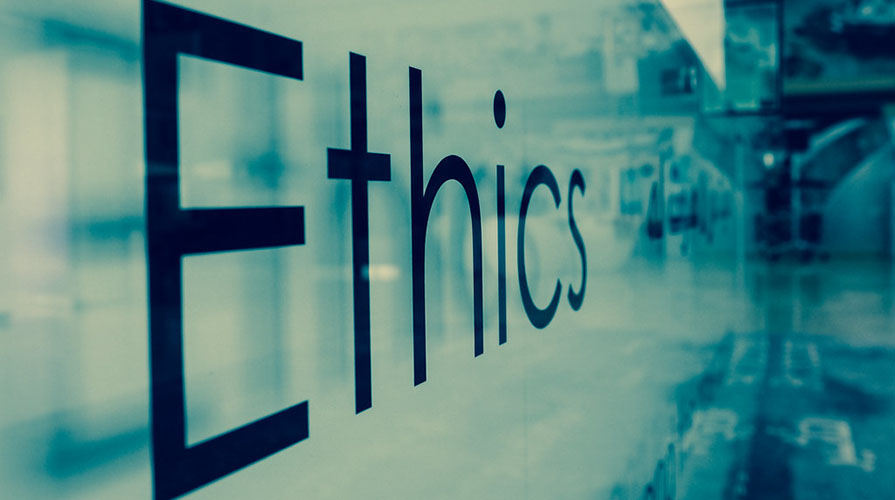 Erica Preston-Roedder, who teaches philosophy at Oxy, likens the Ethics Bowl to throwing students into the deep end of the ethical pool, where nothing is simple and everything has trade-offs. It’s a place for students to come together for civil, democratic discussion about difficult and divisive ethical issues.

“For me, that's so much of what I hope to see my students learn when they do ethics: the ability to acknowledge ethical nuance and complexity, and a commitment to follow the facts—even when that means you end up changing your mind,” says Preston-Roedder, also Oxy’s Ethics Bowl advisor.

Last fall, Oxy’s Ethics Bowl team qualified for the national competition for the first time in the College’s history. Aligning closely with Oxy’s own values, the competition allowed the students to embody the kind of thoughtful, ethically engaged citizen that Oxy strives to put into the world. This year’s team included Oliver To ’22, Sela Morretti-Hitchcock ’23, Phoebe Patinkin ’22, Jae Choi ’22 and Anna Thomas ’23.

Oxy’s team is one of 36 from across the country that qualified for the Association for Practical and Professional Ethics National Ethics Bowl Competition from an original pool of 150 teams that faced off in regional competitions. This year's national event, held February 26–27, featured teams competing in matches using a set of cases drawn from real life ethical challenges. The debates included questions about the proper limits of hate speech on campus, the genetic manipulation of animals, satire in political speech and the ethics of residential fireworks, among others.

Preston-Roedder says that the Oxy team has been truly extraordinary this year.

“I was particularly impressed by their treatment of the case of homelessness for the regional competition, an issue which matters to all of us here in Los Angeles. It was one of those semesters when I felt like the students were pushing me to think more deeply, and with more humility, about these issues.”

Philosophy major To has appreciated the breadth of topics in the cases.

“It makes me draw in things that I’ve learned from every single class I’ve taken,” he says. “The more you know about the world and the people in the world, the better you are at Ethics Bowl.”

Ethics Bowl is a philosophy class at Oxy that students can take in the fall with the regional competition as the main focus. Students receive the cases for the competition months in advance so that they can research and discuss the main ethical dilemma of each one and practice presenting. When competition time arrives, the mediators ask a question about any one of 15 cases and the teams have a minute to game plan before they start presenting to the judges and discussing with the opposing team.

Philosophy major Moretti-Hitchcock says her favorite part about Ethics Bowl has been working as a team and building camaraderie to create the best possible product. That teamwork was put to the test when they qualified for nationals and were given a set of 17 cases with only weeks to prepare. With lots of hard work and help from Preston-Roedder, the team felt ready when February 26 rolled around.

“It was very nerve-wracking because being the first team, we had no idea what to expect, but it was also very exciting,” recalls Moretti-Hitchcock. “I am proud of my team.”

To, who is currently studying abroad in South Korea, was competing in a time zone 16 hours ahead of Los Angeles. He worked through the night with his teammates who logged in from a room in JSC Commons to represent Oxy on the national stage.

To calls the Ethics Bowl class his favorite so far at Oxy and he wants to encourage other students to give it a chance. “Everyone’s experience is valuable,” he says. “Being in the Ethics Bowl has made me a more conscious person; being more aware of what's happening in the world has definitely made me better at ethics.”