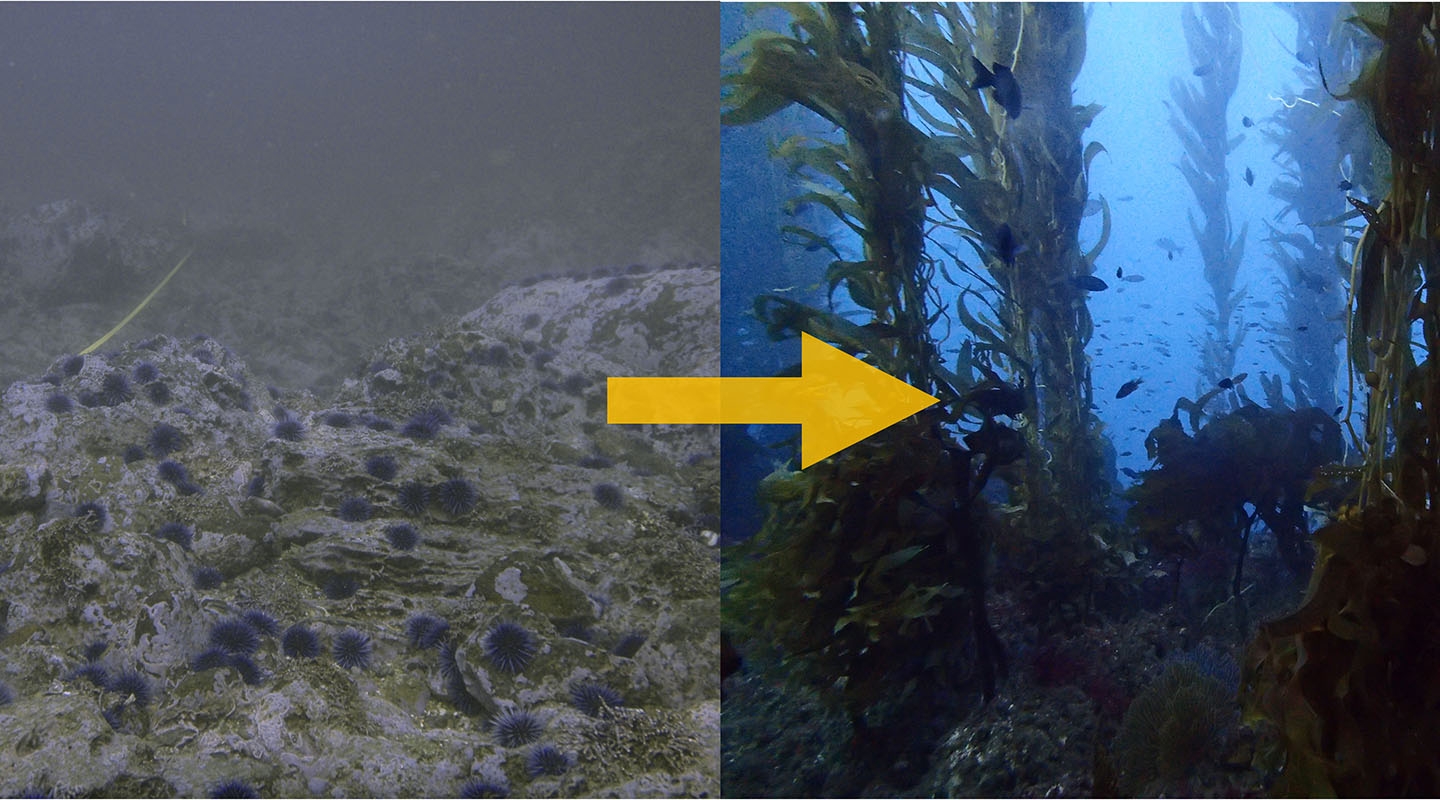 A massive die-off of purple sea urchins off the Southern California coast in 2015 provides new evidence that deliberate efforts to cull urchins can be a key strategy to bring back giant kelp forests and the high-value commercial marine species they support, a new Occidental College study has found.

Published in the April 15 issue of the Marine Ecology Progress Series, the study—based on a decade of annual surveys off the Palos Verdes Peninsula, where kelp beds had shrunk by about 80% over the past century—has implications not just for Southern California but the entire Pacific Coast north to Alaska, as well as Australia and New Zealand, says lead author Jonathan Williams.

“For nearly 60 years, sea urchins have been overrunning and destroying kelp forests—a three-dimensional marine habitat that supports more than 700 species of animals, including numerous commercial and sportfishing species,” says Williams, a research scientist with Occidental’s Vantuna Research Group (VRG). “Marine biologists have been exploring how we might be able to reverse this trend for almost as long.”

Nearly one-quarter of all California marine organisms depend on giant kelp forests for some portion of their life history. Among the fish whose populations have rebounded with kelp restoration is the bright orange Garibaldi, the official state fish of California.

"The success of urchin culling in restoring kelp forests has broad implications for how coastal habitats are managed around the planet and illustrates the value of developing strong public-private partnerships between local non-profits, academic institutions, federal and state agencies, and commercial fishermen," says David Witting, study co-author and biologist with the National Oceanic and Atmospheric Administration's Fisheries Restoration Center. Other co-authors include scientists from Cal Poly Pomona and The Bay Foundation.

While kelp restoration involving urchin culling began in 2013, in early 2015--halfway through the decade-long VRG study--a local outbreak of a bacterial infection known as “black-ring disease” among purple urchins nearly wiped them out, making it possible to study what would happen if human efforts to reduce urchin populations were equally successful. “Rocky reefs returned to a kelp-dominated condition just six months after the first signs of the urchin die-off appeared and remained that way through the remaining five years of the study,” Williams says.

That positive result demonstrates that the assumption underlying culling efforts, which involve scuba divers wielding hammers and whacking urchins that can reach densities of 100 per square meter, can be successful in pushing urchin-devastated rocky reef ecosystems back over their ecological tipping point and allow giant kelp forests to flourish.

Urchin culling efforts do not target red sea urchins, which produce roe known as uni that is often used in sushi. Reducing purple urchins to normal densities led to a rapid return of giant kelp and other understory algae, the red urchin's primary food source, resulting in greater roe production and red urchins once again being viable for the fishery. “This has provided motivation for commercial urchin fishermen to become involved in restoration efforts and actively contribute to ecosystem restoration,” the study notes. Since 2013, five commercial fishermen have contributed over 10,000 hours underwater culling purple urchins to restore kelp on the Palos Verdes reefs.

Williams and his co-authors are quick to point out that the causes for purple urchin population explosions are complicated and cumulative, and that successful kelp restoration will likely require a multi-faceted approach, including improvements in water quality and the continued implementation of marine protected areas.

“Kelp forest restoration is about creating resilient coastal ecosystems that provide us with fresh local seafood, improve water quality, sequester carbon, and in the case of Southern California support hundreds of species.” says Tom Ford, CEO of The Bay Foundation. “Kelp restoration is a powerful tool to help us address climate change while providing numerous benefits to people and wildlife. We need rapid solutions, and nothing grows faster than giant kelp.”

The urchin culling project and monitoring that contributed to the study was funded by a 2001 environmental settlement with Montrose Chemical Corp. and other industrial companies which were responsible for putting harmful pollutants, including DDT and PCBs, into Southern California waters. Additional funding was provided by California Sea Grant and USC Sea Grant.

Part of the survey data on which the study is based was gathered by Occidental undergraduates. "Oxy provides not just a classroom-based education, but hands-on experience that produces real, actual data and results that have consequences and can inform environmental and ecosystem management decisions in the real world," Williams notes.

Founded in 1974, the VRG’s research program features both the longest continual time series studies of rocky reefs in the world and the largest spatial-scale studies of reefs in the Southern California Bight.