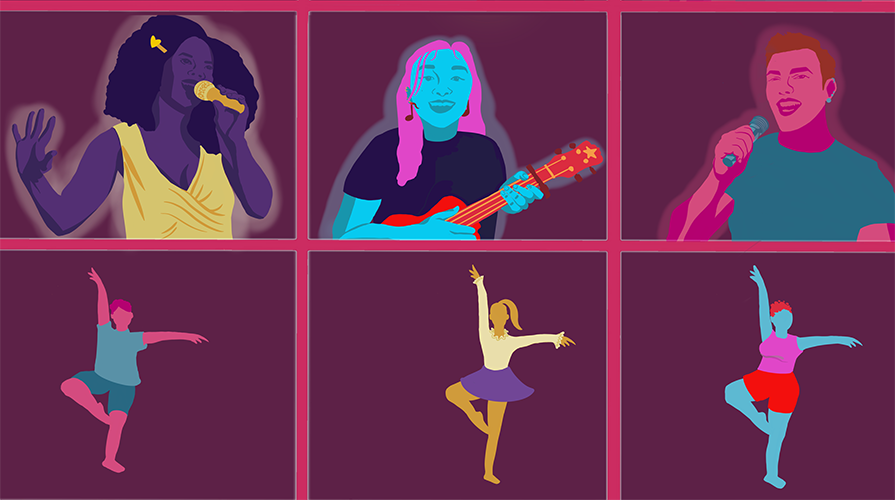 The campus arts community continues to offer opportunities despite classes moving online this semester. Dance Production (Dance Pro), PULSE and Glee Club are continuing their activities and instruction remotely via Zoom to connect students and facilitate their practices.

“All of the e-board was like, ‘Oh this is not going to happen in person,’ so we had to figure out a plan with our choreographers that would still keep the integrity of all of the pieces created this past year,” McCorkle said.

Over the summer, the executive board produced a series on YouTube, highlighting each dance with clips from the fall showing and interviews from the choreographers. Kuo and McCorkle said the new executive board members also started discussing how rehearsals would look and how Dance Pro would do its major events during that time. The executive board members also started thinking about the final performance in March, preparing for the possibility of a virtual performance if students were to continue online classes in the spring, according to Kuo.

“I’m still optimistic that it’s going to be equally as strong as it would be in-person, but I think there’s going to be an adjustment period of learning dances online, being in a dance rehearsal space online and trying to connect with people that you may have never met before,” Kuo said. “It’s also difficult to figure out which hand to use. If the choreographer tells dancers to move their left hand, some people might think it’s the right. That’s going to be a hurdle that’s going to take a little bit of time to figure out.”

Currently, choreographers are holding rehearsals over Zoom. If there are any issues with time zones or internet connection, McCorkle said choreographers will also offer asynchronous rehearsals and can send videos to dancers who still want to learn but cannot make the scheduled time. Additionally, Kuo said she and McCorkle are asking their dancers and choreographers to be as flexible as possible because everyone is experiencing different circumstances right now. According to both McCorkle and Kuo, they want to provide a space for people to dance regardless of where they are or what circumstances they are in.

“We’re working together and supporting one another during this challenging time, and I think Dance Production is still doing what it does best, providing a space for anyone who wants to have fun and learn how to dance,” McCorkle said.

Professor Francisco Martinez, the Dance Pro faculty adviser, said he was pleasantly surprised at how Dance Pro’s executive board came together and came up with many innovative ideas during the remote session and over the summer, staying motivated despite the fact that the organization did not have an in-person performance last spring.

“I’m excited to see how this is going to pan out in the end because there’s usually a lot of choreographers, and it will be interesting for me to see how they shape their style and their concert,” Martinez said.

“There were a lot of different factors going into that decision. The PULSE e-board wanted to give everyone at Oxy space. We wanted to make sure our community was okay and doing well,” Yim said.

According to Yim, the organization is formulating its plans for the school year. She said she sent an interest form to PULSE’s email list-serve to get a grasp for what the Occidental community wants during this time. She said the club was still planning to have virtual dance classes, but they will be on a biweekly basis instead of a weekly basis and will be earlier than they were previously, accommodating for as many people as possible in different time zones.

Other than teaching classes, the organization is expanding its focus to connect students to outside dance organizations, such as Versa-Style LA. According to Yim, Versa-Style LA holds community hip-hop classes while educating people on the art form, providing extensive historical and cultural context. She said that PULSE is trying to have some of Versa-Style LA’s regular teachers have a class for specifically Occidental students. This all falls under a larger initiative for PULSE to restructure its intentions in response to the racial justice movements that were happening on social media over the summer, according to Yim.

“Over the summer, we were thinking about redrafting PULSE’s mission statement and making sure that we structured leadership a little differently. As Oxy is a predominantly white institution, we didn’t think that PULSE, which taught a lot of hip-hop, represented what we wanted it to,” Yim said.

Yim said that she thinks one of the big challenges this year will be engagement in a virtual space. According to Yim, the PULSE executive board has been brainstorming on how to engage people, but they understand people might not be as mentally or physically engaged because of the current circumstances. Overall, Yim remains optimistic about PULSE’s new direction.

“I’m excited about the energy we’re going to put into re-educating and re-centering the choreographers’ intentions,” Yim said. “Seeing everyone back is great too. PULSE e-board is a really tight-knit group of people who will always have our community at the forefront when trying to make decisions.”

Last May, the Occidental Glee Club did an asynchronous performance of “When The Party’s Over” by Billie Eilish at the 2020 virtual commencement ceremony. According to Alissa Bernstein (senior), the performance was a complex process. She said that each Glee Club member sent an audio recording and a video mouthing the song to an audio editor. Then, the audio editor stitched together all of the files to make it look as if everyone was synchronized.

“We can’t really do a live concert over Zoom because we wouldn’t be in sync and match up; it would just be a mess. Given the fact that we’re not in person and we can’t be singing in Herrick, we’ll probably be doing a few recorded pieces during Homecoming and our Winter Concert,” Bernstein said.

This semester, Glee Club will do without its Wednesday rehearsals to accommodate for as many timezones as possible, according to Bernstein. She said that the virtual environment of this semester was an adjustment because it was strange not to hear others sing around her.

“Essentially, we have little piano tracks that we listen to with our earbuds, or the Choir Director will play the piano and we’ll all mute ourselves and sing. We can’t hear anybody else, but we’re all singing in our own rooms, and we have to trust that we’re learning it correctly,” Bernstein said.

However, Bernstein said that Glee Club has always been really great at creating tight-knit bonds, so she remains hopeful that this new process will get easier over time.

“I’m really excited to explore this uncharted territory with all the people that I’m already close with and also all the new members. If we get back to school in the spring, that will make the reunion all the better,” Bernstein said.

Desiree La Vertu, director of choral and vocal activities, said that creating a welcoming environment was a big priority for her. About a month ago, she sent out an email request to all the Glee Club alumni and asked them to submit videos. Since the Glee Club is almost 100-years-old, she said they now have an hour’s worth of video tributes for the new students.

According to La Vertu, there have have been many online webinars and resources for her to learn how to use Zoom in an engaging way. Inspired by other choral conductors at other institutions, she said that she’s excited about the challenge of building solid musical performances and building community.

“Artists have always been the people who’ve tried to lead culture out of chaos, so I’m keeping that as my mantra. The arts can stay alive and surmount all the technical challenges, and we can still make music, art and theatre even with the challenge of not being together,” La Vertu said.