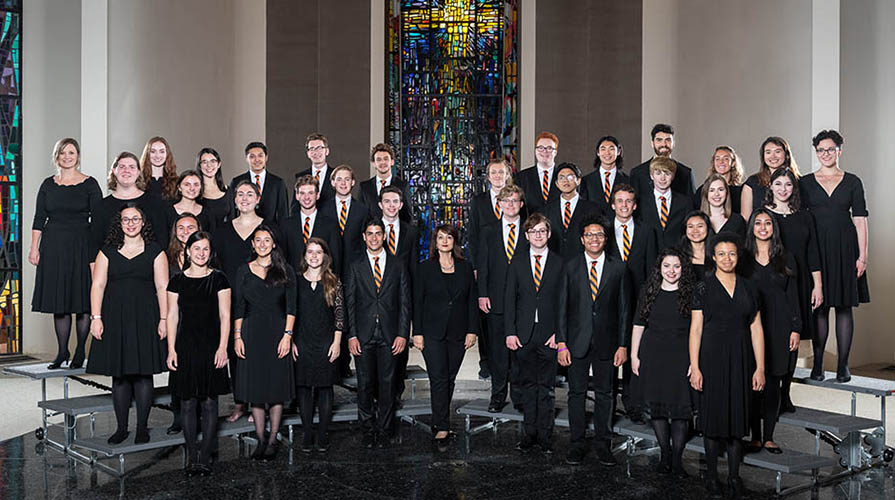 Since 1906, the Occidental Glee Club has played a central role in the life of the College, drawing musicians of the highest caliber and giving voice to our college spirit.

In March 2020, Oxy community members were informed that classes would continue online, and that all in-person events would be cancelled due to the COVID-19 pandemic. For the Glee Club, this meant not only that we would not return from Spring Break to sing with our friends in the choir room, but that the three events we were preparing for (Fauré Requiem with the Oxy Orchestra and Pops & Senior concerts) would no longer occur. In the face of this situation, instead of allowing the pressures of the awful situation to silence our songs, we remembered that Glee Club as a community is also a support system, and we continued our work. We finished that Spring semester with two “virtual choir” recordings to share with our supporters, one of which was Billie Eilish's "When the Party's Over", which can be viewed below.

In this 20-21 academic year, with no concerts planned and with our tour to Italy cancelled, our singing continued on in this virtual world. Informed by our experience from the past semester and fueled with the energy of our new members, we directed our energy into releasing five virtual choir recordings. In the fall, we prepared the civil rights anthem “We Shall Overcome” for the Homecoming virtual celebration; in December, we recorded Irving Berlin’s “White Christmas,” with which the Glee Club ends every annual Winter Concert; and in January, we released John Tavener’s serenely epic “Song for Athene,” which we had worked on all semester. Transitioning into a pop focus for the Spring, we started the semester with a recording of “The Chain” by Fleetwood Mac. Then to honor the Glee seniors, we recorded not only the Beatles’ “Ob La Di'' but also created a fresh recording of the “Occidental Fair," our college alma mater.  ALL of these “virtual choir” videos (going back to Spring 2020) can be viewed below. We invite you to take a look and listen!

We will return in the fall to learn our new repertoire for the 21-22 year, which will culminate in a Course Abroad (performance tour) to Italy in May 2022. We are excited to sing together again (wearing official “Singer’s Masks”) and use the lessons we learned about our abilities as individual singers while recording independently to strengthen the power of the art we will make as an ensemble.