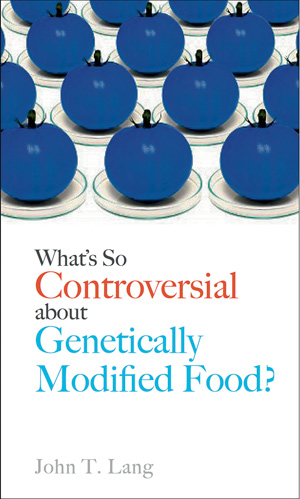 The public debate over genetically modified food is more about the social and cultural values people invest in what they eat rather than the science of bioengineering, Occidental College sociologist John Lang says.

Lang’s analysis of the GMO controversy is one he presents in a recent book, What's So Controversial about Genetically Modified Food? (Reaktion Books). It’s also among the issues on the agenda at this month’s international academic food conference he helped organize at Occidental—in addition to GMO alternatives such as organic farming, locally sourced food and sustainable and post-industrial agriculture.

The now-widespread use of genetically modified food incites fierce debates among environmental activists, scientists, government regulators, representatives of the food and agriculture industries—and, of course, consumers. While some portray GMOs as scientific progress, others frame them as dangerous both to people and the environment.

Lang’s book explores the science—and misconceptions—that surround genetically modified food. Food is deeply imbued with religious, social, cultural and ethical meanings, which bring a variety of non-scientific issues to the forefront and make genetically modified food a proxy for larger debates regarding topics such as globalization and corporate greed, he writes.

"If you’ve ever looked at a ‘Non GMO’ label in the supermarket and wondered what it really meant, read this book. It’s a thoughtful inquiry into the nature of genetically modified food, and it will get you to think more deeply about all of the food you eat," Dan Charles, food and agriculture correspondent for NPR, said of Lang’s treatise.

Lang, an associate professor of sociology, began researching genetically modified foods in 2002 as a graduate student as part of a study sponsored by the Food and Drug Administration, which had been "taken by surprise" by the public’s negative reaction to GMOs.

"What the industry thought was going on is that people just didn’t understand the science behind it. They thought if we explained the science they would feel safer," Lang says. As it turned out, that conjecture was inaccurate.

In fact, the issue was more cultural and social, says Lang, who argues that GMOs pose little to no health or environmental risks.  "It turns out people really wanted to know who’s making this and why are they making this and what was wrong with the old way they were doing things, with seeds."

What it came down to is a feeling that "Our food is industrialized in so many ways. People’s reaction was, ‘I don’t want people messing with my food.’" The issue food scientists need to address, he says, is how to make people comfortable with new technology so that they accept it. "Foods are messed with and processed in a whole host of ways. There are much bigger needs and scarier issues that GMOs," he says.

Many of these other food issues will be addressed at the Agriculture, Food and Human Values Society (AFHVS)/Association for the Study of Food and Society (ASFS) annual meeting and conference, held on the Occidental campus from June 14-17. Organized by Lang and drawing upwards of 500 scholars from around the globe, the conference will tackle topics including food environments, medicalization and nutrition; food media and representation; eco/natural foods and animal welfare; territory, local food production and resistance; agroecology, seed saving and sustainability; and teaching food history, among other subjects.

In addition to his teaching duties, Lang is the book review editor at Food, Culture and Society: An International Journal of Multidisciplinary Research and serves on the board of directors for the Association for the Study of Food and Society.