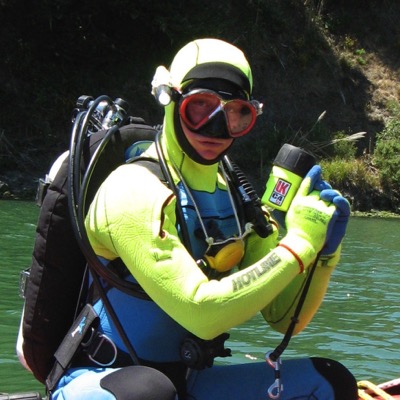 Matt is a Research Associate who has been working with the Vantuna Research Group since the fall of 2015, and has studied estuarine and coastal ocean processes and ecology in Oregon and throughout California since 2001. He completed his B.S. in Fisheries and Wildlife at Oregon State University in 2002 and his M.S. degree in Ecology at UC Davis in 2013 as part of the Coastal Oceanography Group at the Bodega Marine Laboratory. He has extensive hands-on experience working with marine oceanographic electronics including current profilers, hydrographic equipment, nutrient and carbonate chemistry sensors, oxygen monitors, and sonar bathymetry mapping equipment. Spatially explicit physical and chemical data from these instruments is used by Matt to assess water quality and habitat suitability in small estuaries and on the open coast of California. He also has been a research scuba diver since 2002, leading and completing physical and biological surveys of marine species and their habitats on the Oregon coast and in southern California. Matt has worked with many public agencies in California, including federal, state, and local entities. His current role in the VRG includes oversight of diving and boating operations, data collection and compilation, training, analysis, and reporting. View his CV.