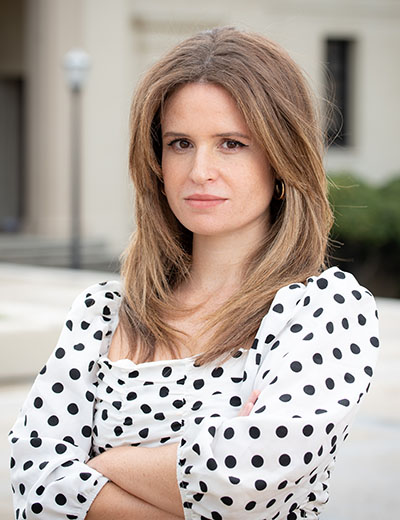 Her research interests include Spanish national identity in the 21st century, theater, race in contemporary Spain, and gender with a particular focus on masculinities in popular culture, especially film and TV series. Martínez-Sáez’s poetry has been published in literary magazines, and she is passionate about creating and partaking in community-based theater in Spanish. She has a Ph.D. in Iberian and Latin American literatures and cultures from Ohio State University, a master’s in Iberian studies from Ohio State, and a B.A. in English studies from the University of Alicante.

Everything! I love the fact that Oxy is a small liberal arts college that values creativity, innovation, and close and long-lasting relationships with students. And, on top of that, it is in one of the most vibrant cities in the world. I felt really drawn to the sense of community on campus and the endless possibilities of working with students and other faculty members.

What are your impressions of Oxy in general?

I’ve only worked here for one semester, and I already know so many students and faculty at Oxy. I love going around campus saying “Hola” and “hi” to everybody. Oxy really feels like family. I’ve already met so many interesting professors from diverse disciplines that inspire me to pursue intellectual and artistic projects both inside and outside the classroom. Regarding the students, I’ve never had so many come to my office! They are intellectually curious, active, creative, and they love to think outside of the box. My first impressions of Oxy could not be more positive!

I love the fact that Oxy is a small liberal arts college that values creativity, innovation, and close and long-lasting relationships with students.

Where did you develop an interest in contemporary Spanish culture and literature?

You have published award-winning poetry and are active in community-based Spanish-language theater. Are you currently at work on anything?

My poetry book Nosotras las desterradas (Displaced Women) is currently under review by a prestigious publishing house. This book deals with the experience of leaving one’s homeland, building a life from scratch as a migrant, and women’s expectations in our postmodern society. I’ve been working on this project for a few years, so it’s very exciting. In addition, I am currently working on recruiting students to create a theater club in Spanglish with the Latinx community at Oxy and Spanish-speaking students. This would be a dream come true!