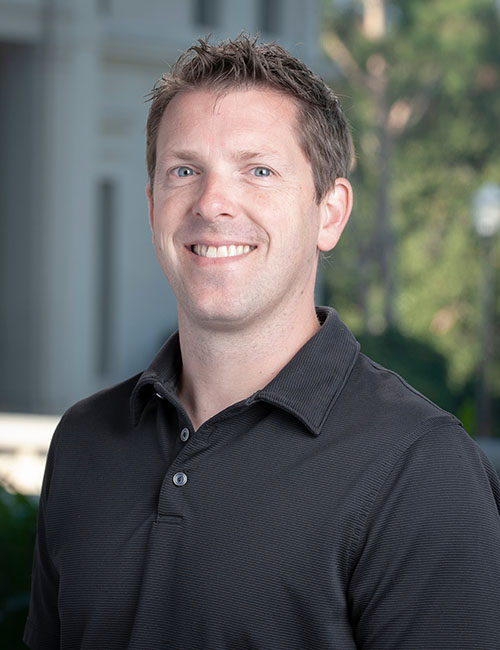 When did you take an interest in mathematics?
Brown: I was originally interested in physics and astrophysics. I read Stephen Hawking’s A Brief History of Time around eighth or ninth grade and that hooked me. I stayed with astrophysics until my first semester of college when I realized I didn’t like sitting out all night taking measurements. I switched to physics, until I realized I didn’t like taking measurements in a lab any better. I finally became a math major at the end of my first year of college. I was fortunate enough to take a bunch of honors and graduate courses as an undergraduate so I knew I wanted to become a mathematician by the time I was applying for graduate school.

What attracted you to Occidental?
Brown: I enjoy doing research as well as working with students so a strong liberal arts college such as Occidental that prizes both always seemed like a good fit. I was a postdoc at Caltech about 10 years ago and lived in Eagle Rock at the time. I fell in love with Southern California then and kept my eye out for a job opening at Occidental ever since.

You’ve won a couple of teaching awards at your previous institutions. What do you enjoy most about teaching?
Brown: I enjoy helping the students make connections between new material and what they already know. It is rewarding when students make comments that they could do the computations in calculus before my class, but really understand why those are the correct computations and how they apply to real world settings after taking my class.

Your forthcoming paper examines “Congruence primes for automorphic forms on symplectic groups.” Can you explain that in lay terms?
Brown: Sadly, no I cannot. The best I can do is to point out that in 2000 the Clay Mathematics Institute picked seven mathematics problems they considered the most important unsolved problems in mathematics. The resolution of any of these problems comes with a $1 million award; only one problem has been solved in the interim 18 years. One of the unsolved problems is the Birch and Swinnerton-Dyer conjecture. This problem deals with points on elliptic curves; such points have applications in elliptic curve cryptography. The paper cited above provides evidence for a generalization of the Birch and Swinnerton-Dyer conjecture.

Outside of work, what do you like to spend your time doing?
Brown: I enjoyed traveling and fortunately my work has allowed me to visit a lot of wonderful places I may have never planned a vacation to. I am a bit of a foodie so I like to try new restaurants and cuisines, which makes Los Angeles a great place to live. I also enjoy doing landscape photography as well as playing basketball and golf.